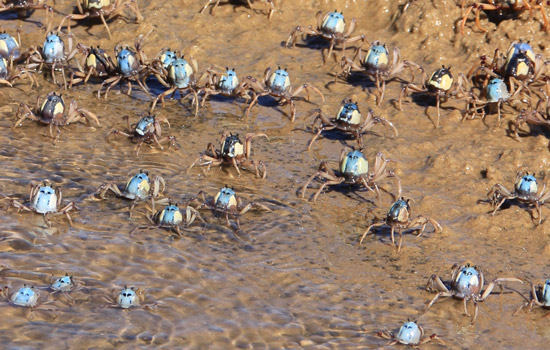 They are invisible to the human eye, but they are there – millions of microbes in our beaches, breaking down the rubbish in our waters.

Now an international study conducted in Port Phillip Bay, Melbourne, has found for the first time that these microbes can function just as well with or without oxygen.

The research was published today in Nature Microbiology.

The study is significant because it shows that coastal sands act as biofilters for our seas and oceans. Thanks to their highly flexible microbial communities, they can degrade organic matter regardless of whether oxygen is present.

This study involved an international team of researchers led by Associate Professor Chris Greening and Professor Perran Cook from Monash’s School of Biological Sciences, and the School of Chemistry. They worked together to define the microbial communities in sands and understand how they influence nutrient-cycling processes.

“Our paper shows that coastal sands protect our seas and oceans from pollution. They rapidly degrade organic matter under both oxic and anoxic conditions,” said study co-first author Dr Adam Kessler, from the Monash School of Earth, Atmosphere and Environment.

The breakthrough finding was that the same microbial community exists in oxic and anoxic parts of the sediment. In most ecosystems, the types of bacteria present change depending on whether oxygen is available. In contrast, in sands, the bacteria are remarkably able to change their capabilities in order to cope with ever-changing oxygen levels.

This reflects that the bacteria in these communities are highly flexible. They microbes simply switch from respiration to fermentation if oxygen is not available. This means that they can keep processing carbon with no delay for adaptation.

In addition to removing organic matter, these sands are also critical for buffering against nitrogen and phosphorus levels. Together, this counteracts the development of eutrophication, which can lead to algal blooms and fish die-offs.