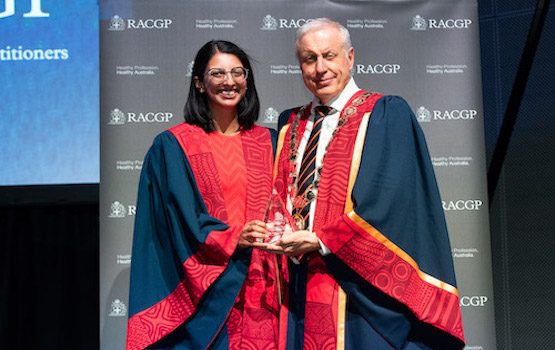 Dr Pallavi Prathivadi, currently a 2nd year PhD student at the Department of General Practice (Faculty of Medicine, Nursing and Health Science), was recently named the 2019 RACGP Registrar of the Year at the GP19 event in Adelaide in October.

Dr Prathivadi initially won the Victorian title in August 2019 and was then nominated for the national award. The annual RACGP awards are designed to recognise outstanding achievements and exceptional individuals for their contribution in general practice.

After considering a number of specialities including paediatrics, obstetrics and gynaecology, and combining an interest in opioid prescribing with a speciality, Dr Prathivadi eventually had a ‘light bulb’ moment.

‘Eventually I realised that if I was thinking about so many different specialties, perhaps I was actually a generalist,’ she said. ‘I finally got my act together and became a specialist GP, and have never been happier.’