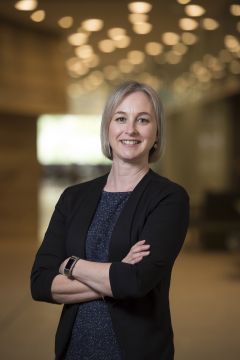 Awarded by Suicide Prevention Australia, the Post-Doctoral Fellowship will see Dr King partner with Incolink - a provider of mental health training and services to the construction industry – to evaluate the effectiveness of their Bluehats Suicide Prevention program.

“Suicide among construction workers is 1.7 times higher than that of other male workers, and the industry rolled out the Bluehats Suicide Prevention program in response to these concerns,” explains Dr King.

“The aim of the project will be to support the program’s implementation, better understand its effectiveness, and optimise the impact of the program with the aim of reducing the rate of suicide within the sector.”

Dr King has developed a body of research focusing predominantly on the effectiveness of suicide prevention interventions for men and boys. She recently led a project that examined the pathway to suicide in men aged over 85, and is currently leading a project to evaluate a school-based intervention delivered to teenage boys, with the ultimate goal of reducing the rate of suicide among men.