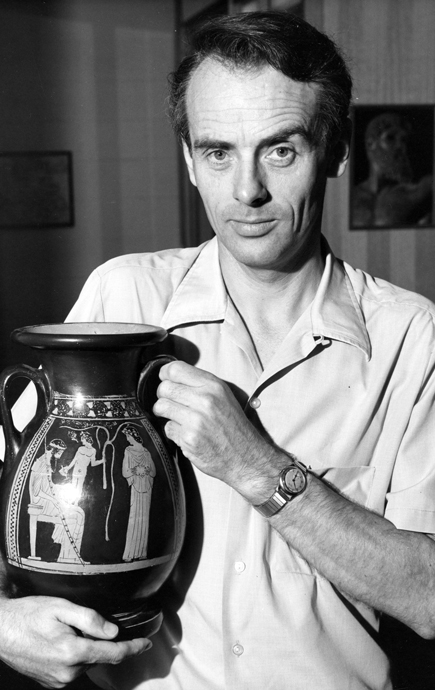 Professor Alan Sorley Henry, who died on New Year’s Day aged 85 years, was a Scotsman who carved out a distinguished career far from his roots, championing awareness of ancient civilisations.

Alan came to Monash in 1973 as Chair of Classical Studies, where he was passionate about building links with high schools to promote the importance of the classics, which he considered were suffering from neglect.

The emphasis of his teaching was in the field of Greek tragedy, ancient Athenian inscriptions and Greek language and he enjoyed an international reputation as an epigraphist. To this end, he wrote a beginners’ guide to Greek and collaborated with other scholars on a book on Greek inscriptions in the series, Supplementum Epigraphicum Graecum, which was praised by one reviewer for its “thoroughness” and” sharp linguistic sense” and provided scholars in the field with a practical working tool.

Whilst an advanced orthodox scholar in his field, his expertise was broad; his publication list revealed his knowledge of Sophocles and he was more than competent at Greek palaeography as a result of his work on the various manuscripts of Aristophanes at St Andrews University in Scotland, his alma mater. His substantial record of publications in leading classical journals demonstrated the wide scope of his research.

Despite the loftiness of his attainments, Alan was able to readily adjust his outlook to the humdrum of everyday. He was known as a most efficient administrator and ran his department with unobtrusive skill.

As a teacher, he was painstakingly conscientious without being dull and was considered an entertaining and likeable lecturer who was adept at gauging the level of his audience.

Alan Sorley Henry was born in Ayr, Scotland, to parents James Dunbar and Mary Hunter (Smith) Henry. He graduated MA in 1957 from St Andrews, having won the Lewis Campbell Medal for Excellence in Greek and the John Burnett Memorial Prize in Greek. He undertook a diploma in education at Queen’s College, Dundee, in 1958. Whilst assisting in the Department of Greek at St Salvator’s College at St Andrews, he worked on his doctoral thesis, entitled The Language of Attic Inscriptions (excluding ostraka and vases) 323-146 BC.

After migrating to Australia, Alan joined the University of New England in 1963 as a lecturer and was promoted to senior lecturer in 1966, becoming an associate professor three years later.  Despite being born a Highlander and educated in the very thorough Scottish tradition, he was renowned for his delightful sense of humour and gamely took any part in the bawdy readings of Aristophanic comedies produced by the students’ Classic Club, Clio.

In 1967 he was awarded a Myer Foundation Grant-in-Aid Travelling Fellowship which enabled him to advance his work by visiting Greece and the UK where he attended the Fifth International congress of Greek and Latin Epigraphy in Cambridge. During study leave in 1969 he held appointments as a visiting research lecturer at the University of St Andrews and a visiting associate professor at Indiana University in the US.

Whilst at Monash, Alan joined forces with mathematician Professor John Crossley in an interdisciplinary collaboration that saw the ancient worlds of maths and language eloquently collide. Professor Crossley had developed an interest in the Persian polymath al-Khwarizmi whose work was vastly influential in the fields of mathematics, geography and astronomy and was the source of Western European knowledge and use of Hindu-Arabic numerals. Together he and Alan published the paper, Thus Spake al-Khwārizmī: A Translation of the Text of Cambridge University Library Ms. Ii.vi.5 in 1990.

Alan’s time at Monash, was not always easy due to cuts in budgets during his tenure and a root and branch reform of the Classics department in the Dawkins era. He was vigorous and articulate in his belief that the teaching of Classics within the University could generally make life more civilised for all beyond its walls but was disappointed others couldn’t share his view. Co-operative by nature and frank in opinion, he remained, nevertheless, respectful of different schools of thought.

Alan was a member of the Classical Association of Victoria, of which he was president 1986-1996. He was also responsible for the establishment in Melbourne of the Monash Friends of the Australian Archaeological Institute at Athens, which enabled graduate students to visit the ancient capital for research purposes and also saw Greek scholars include Monash in their overseas tours. Alan was also an honorary life member of the Australian Society of Classical Studies (now the Australasian Society of Classical Studies) to which he donated several runs of periodicals in the field of classical studies for use in the Athens Library. In 1993, he was made a Fellow of the Australian Academy of the Humanities.

Alan retired from Monash in 1996 and was appointed Emeritus Professor. Afterwards, he returned to the UK where he was an Honorary Professor at St Andrews.

Alan had five children, three with his first wife, Elizabeth McNairn, and two with his second wife, Martine Perrin, also a Classicist. When he wasn’t working, he enjoyed playing golf, reading and music. A generous host, dinner parties at his home were said to be a delightful affair, befitting a man who was both a gentleman and a scholar.