Ben joined Monash in 2008 as an IT help desk consultant.

“My Dad noticed a six month position in IT that suited me. I applied and was successful - and am still here six years later!”

Ben’s first impressions of the job were very positive.

“I enjoyed myself from day one. The staff were fantastic, the induction was very thorough and they even gave me cake! (I started on my birthday)."

Ben’s career at Monash has been progressing steadily since, after being promoted to help desk supervisor he moved into a finance role as a Process Improvement Analyst.

“The career progression here is great, I started in IT and moved over to Finance, which is something I would never have thought possible six years ago.”

These days Ben is the Manager of the Corporate Support Purchasing Services team, he is responsible for six teams and over 40 staff members. As a young leader Ben says his passion is developing his staff, and getting the best out of them.

Ben attributes the longevity of his time with Monash Finance to the opportunities he has been afforded and the fantastic work life balance that is on offer.

He also enjoys the social side of working at Monash Finance.

“I recently participated in a mixed netball team during the Uni Games. We did pretty well and made the Grand final. Unfortunately we lost due to the fact I was unable to play, I like to think so anyway...” After two years working at a Charted Accounting firm, Danielle decided she wanted a change.

“I joined Monash Finance because I was interested in contributing to a world class educational institute and I felt that Monash could offer me a diverse workplace with opportunities for career progression.”

Danielle joined us in 2009 as a Finance Officer. After a year Danielle became the University’s Financial Accountant.

“The opportunity of the Financial Accountant role became available due to other internal promotions and I was very excited to take on the challenge!"

Danielle says the best part of her role is the work.

“Even though it is essentially always the same, it never feels that way because of changes in the accounting standards and other reporting regulations, so there are always new challenges. I also enjoy working with other people which is very important in the Financial Accountant role.”

Danielle also enjoys the benefits that come from working at Monash Finance.

“There are so many benefits for staff, most importantly for me is the friendly work environment and relaxed culture. Monash also offers great maternity leave! I also think it’s great that Monash has a commitment to improving the way that we operate to support environmental sustainability.” 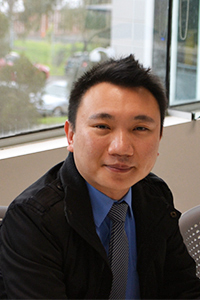 Henjo joined Monash Finance as a Graduate Accountant in October 2003.

“My first role was processing SAP forms, giving them the right roles and cost centre access. In my next rotation I helped with the journaling and processing of month-end transactions as well as assisting in the production of the university's annual report. I also helped monitor the university’s daily cash balance and cash requirement.”

After finishing his graduate rounds, Henjo was offered a role in Finance on a permanent basis as a Finance officer where he stayed for a few years before moving into his current role as a Senior Management Accountant.

Henjo believes that being a graduate at Monash Finance was a good first step in his career.

“The graduate program allowed me to learn a lot from various areas. I learnt how all the different areas interact with each other and how it all fits in the university's system. I saw accounting systems in practice, rather than theory in the classroom.”

Henjo says he has stayed with Monash Finance because of the friendly people and good work-life balance. In the future he plans to keep developing his skills by utilising the professional development opportunities available to him at Finance.