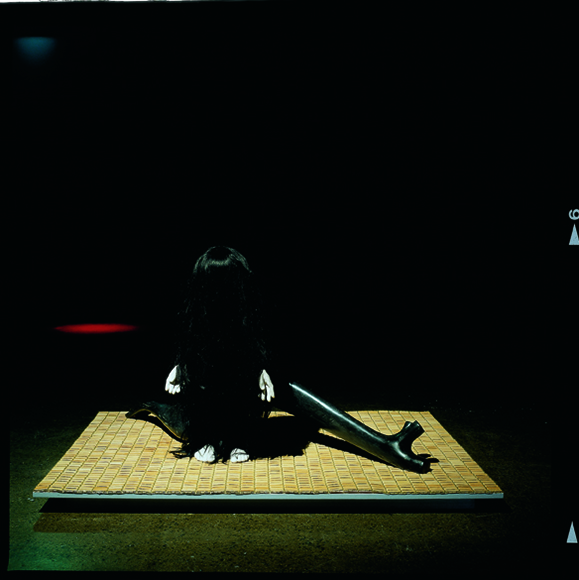 Incident in the Museum 2: John Meade

Melbourne artist John Meade will feature in the latest exhibition in theIncident in the Museum series, presented by the Monash University Museum of Art. The Incident in the Museum series is an occasional program of newly commissioned exhibitions, projects and events by contemporary artists. INCIDENT IN THE MUSEUM 2: JOHN MEADEfeatures new work by Meade, who has recently returned from New York where he enjoyed 12 months research as a recipient of a prestigious Anne and Gordon Samstag Visual Arts Scholarship.

The centre-piece of the exhibition is a dramatic new work completed in New York over the past 12 months, Black duo: self portrait as Mary Magdalene, and nude with pitchfork 2004, is a depiction of an aberrant upright figure, accompanied by another more organic, abstract reclining motif, which takes the form of an over-scaled, monstrous section of respiratory tract.

Meade’s upright figure - Self Portrait as Mary Magdalene - is based on an early Renaissance wood carving, Mary Magdalene, by Donatello. The second, reclining figure, Nude with Pitchfork, also relates to the history of sculptural form and to the body, although in this case, the corporeality of Meade’s sculpture is ambiguous, a confusion of interior and exterior, and the classicism of its late-modernist reference is infected by the uncanny and the surreal.

Donatello’s Magdalene is noted for its expressive qualities, and for the depiction of the former prostitute as outwardly wasted and distressed, while inwardly enlightened by the transformative power of pure faith. Max Delany, MUMA’s Artistic Director, suggests that, “like Donatello’s Mary Magdalene, Meade’s Black duo – whilst all hair, formless, and irrational - is equally virtuous and expressive, supplicant yet dignified, and full of potential”.

John Meade’s playful, theatrical sculptures play with scale and expectation. Tapping into the real and the subconscious, they provoke both the mind and body of the viewer. In the catalogue accompanying the exhibition, writer Johanna Fahey identifies the way in which Meade’s work has the ability to take one’s breath away.

As Delany suggests: “In this sense, Meade’s work is traumatic (focussed on vulnerability of the body), psychological and sensual (about knowing and feeling), and restorative (giving new breath, and designed to renew spirit and hope)”.