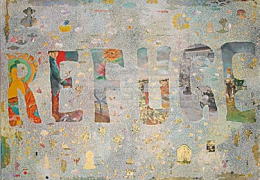 The exhibition brings together a group of prominent Australian visual artists who, through their personal histories, ethics and politics, have a special sense of solidarity with refugees in detention in Australia and in Australian camps in the South Pacific.

This group includes artists who came to Australia as refugees, those who are children of refugees, émigrés and migrants, and a number of artists, both professional and non-professional who are, or have been, detained in Villawood Detention Centre.

Rather than attempting to define a universal refugee experience, the curators of Isle of Refuge have set out to explore the multifarious ways in which the refugee and émigré artists have made themselves ‘at home’ in Australia.

Isle of Refuge explores issues of nationalism, migration, hybridity and interculturality, as well as the representation of ‘otherness’ in relation to ideas of multiculturalism. The participating artists explore Australia as a place from which to actively question the official constructions of national identity, culture and history, in both host- and home-lands; as well as related issues of social exclusion, status and identity, safety and legitimacy.