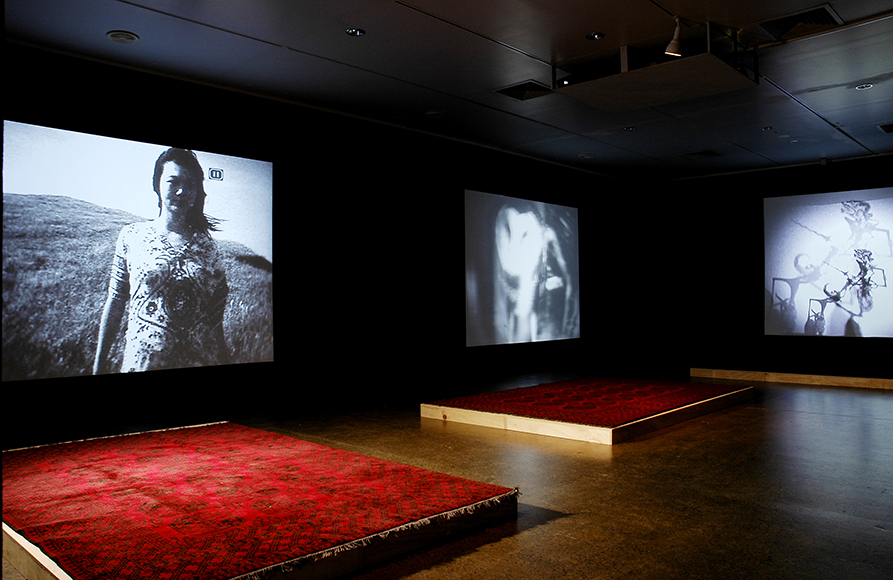 David Noonan: Films and Paintings 2001–2005 comprises a selection of recent gouaches, bleach paintings, oil paintings, collages, films and installations, alongside a newly commissioned film installation developed specifically for the Monash University Museum of Art. The exhibition is the culmination of critically acclaimed exhibitions in New York, Chicago, Melbourne and Sydney from 2001 to 2005; and coincides with the publication of a new monograph on the artist written by Dr Johannah Fahey and published by Thames and Hudson. Noonan’s complex layering of distinct historical and contemporary cultural motifs moves across time and space, encompassing the histories of modernism, science fiction, parapsychology, horror and the gothic, among other cultural reference points from art, film literature, music, fashion and pop culture.

Integrating painting, film and sculpture in all-encompassing installations that resemble cinematic sets, and absorbing decorative interiors, Noonan creates intriguing, scenographic spaces which envelop the spectator. Monash University Museum of Art artistic director, Max Delany, says Noonan’s work evokes a world of emotional intensity, replete with moody ambience: “At once filmic and painterly, David Noonan’s moving pictures suggest timeless narratives of intrigue and suspense. Like the best cinema, David’s works are as much about feeling as they are about looking,” he says.

An acclaimed painter, David Noonan is also one of Australia’s leading video, film and new media artists. As Jarrod Rawlins, co-director of Uplands Gallery, which represents the artist, says: “David Noonan is a multi-task master, old school and new school, not versus”. Noonan’s recent work engages a breathtaking array of historical forms and cultural references, from the romantic sublime of centuries past, through exotic, ‘folk-modernist’ tendencies of 1970s bohemia and hippie culture, to the more ethereal and sinister sensibilities of gothic film and fiction.

With recent paintings depicting lovers, dreamy and encoiled in states of sleep and embrace, pervasive throughout Noonan’s paintings is an interest in the representation of the sensual (and more sinister sensibilities) underlying popular culture, while his films explore transgressive and subliminal themes, and states of ‘interiority’ and ‘otherworldliness’.

Recently voted one of ‘Australia’s 50 most collectable Artists’ [Australian Art Collector, no.31, January–March 2005], David Noonan is one of Australia’s most innovative and successful artists with an expanding international reputation.

To coincide with the exhibition, the Monash University Museum of Art will publish an artist’s book, designed by David Noonan in collaboration with Yanni Florence, with contributions by MUMA Artistic Director Max Delany and a keynote text by Jennifer Higgie, editor of the internationally acclaimed Frieze magazine.