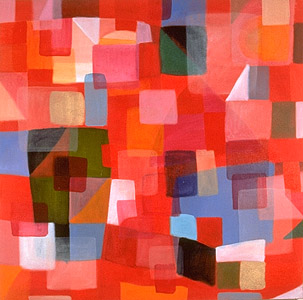 Angela Brennan: Every Morning I Wake Up on the Wrong Side of Capitalism

The Monash University Museum of Art presents a major survey exhibition focusing on the work of leading Australian artist Angela Brennan, to be presented at MUMA in June through August 2006,

Best-known for her colourful abstractions, as well as her irreverent humour, Brennan’s practice encompasses portraiture, text paintings and landscapes. Her beguiling paintings and drawings draw inspiration from diverse realms including formalist abstraction, linguistic philosophy, art history and the unpredictable experience of everyday life. Featuring works from 1975-2006, Angela Brennan: Every morning I wake up on the wrong side of capitalism brings together selected paintings covering the full scope of Angela Brennan’s intriguing oeuvre in its wild abundance and diversity.

'the title of the exhibition - Every morning I wake up on the wrong side of capitalism - is drawn from one of the artist's paintings, based on a text encountered by Brennan in the anonymous form of graffiti. Whilst some might find the title ironic, given the success that has attended the artist's career, it encapsulates the relationship between the orthodox and unorthodox - the pitting of a lawless subjectivity against the symbolic order  that lies at the heart of Angela Brennan's art.'

Artist and psychoanalyst Lizzy Newman writes in her catalogue essay of the complexity and playfulness that is integral to Brennan’s practice:

‘…painting is at the same time trash and treasure… Art usually captures both these extremes – the repudiated and the lauded – in the one moment. That’s because art is a way of mediating or articulating our relationship to something primordial, horrifying, longed for and repressed. As artists we take a little thing – it might be almost nothing – and elevate it tothe status of something, something with stature, something with dignity. Having done so, art nevertheless points to its excluded and traumatic real. I guess this is why art can make us anxious, if not embarrassed or uncomfortable.'

Exhibition Resources:
Angela Brennan: Every morning I wake up on the wrong side of capitalism

Exhibition Catalogue:
Angela Brennan: Every morning I wake up on the wrong side of capitalism