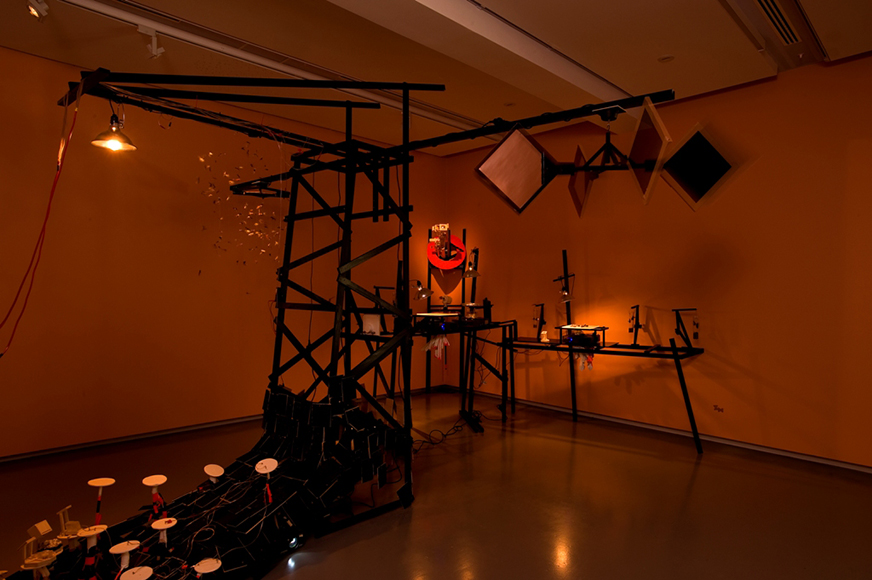 Meijers + Walsh: The Collector 7: The Processor of Circumstance

As part of the ongoing series of project exhibitions commissioned for the Merlyn Myer Gallery, the Monash University Museum of Art presents The Collector 7: The Processor of Circumstance, the latest instalment of the superfiction Henri Papin – the Collector by Hobart-based artists Meijers + Walsh.

Deriving his traits from literary and cinematic figures, Henri Papin – the Collector examines aspects of social anthropology through the development of an obsessive character and psychological schema within a series of large scale sculptural installations. According to Meijers + Walsh, Henri Papin ‘exists in a more fantastical realm – one that utilises delusion as a baseline for normality’.

Henri Papin is a collector of human behaviour. His collections are constructed from moments of voyeurism, fragments of memory and found samples, distilling ‘stains of experience’ into objects or scenarios. Meijers + Walsh describe the centrepiece, The Processor of Circumstance, as ‘a device for measuring that almost unknowable quality which could be described as “attraction”. Henri definitely lacks it – living behind the scenes, voyeur to other people’s lives and experiences. The machine device is his invention for trying to extract and understand the thing which compels interest between people’. Accompanied by a display of fishing flies bound with human hair, this machine draws its energy from a bandaid-clad pig and activates an array of iron filings, ferrofluid, neodymium magnets and lodestones – Henri Papin’s metaphors for desire.

Media Kit:
Meijers + Walsh: The Collector 7: The Processor of Circumstance 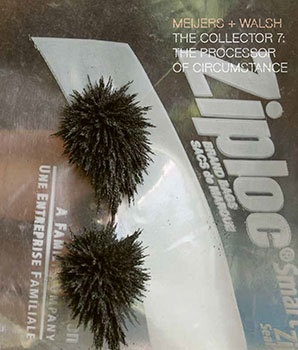