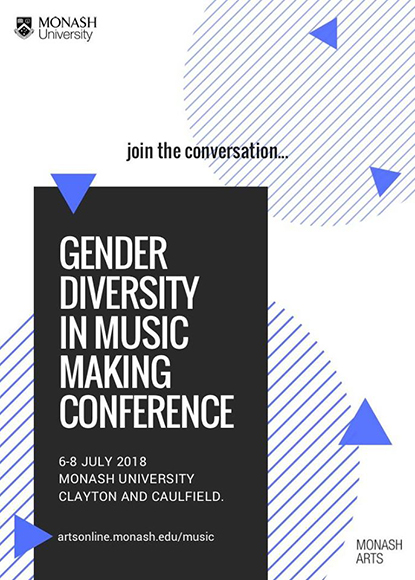 This three-day conference will focus on the music of composers and performers who identify as female or non-binary in gender across the composition and performance of all styles of composition, improvisation, songwriting, installation, film music, jazz, classical, pop, experimental, noise and world music's.

The work of this group of the music community has made a significant contribution to the development of music throughout history, and this conference aims to bring this work to light and look to shaping a positive future where contributions are acknowledged and represented in everyday music life.

Papers, piece and paper, and panel proposals created by authors of any gender that focus on women and non-binary artists are welcomed. Works composed or performed by female identifying and non-binary artists from any discipline are encouraged. Early Career researchers and postgraduate students are particularly welcome to apply.

The conference will incorporate the final concert of the Summers Night Project, a composition mentorship program resulting in three new works by composers from Western Australia, South Australia and Victoria. The opening of the ‘Women's Contributions to Music in the Australian and Korean Contexts' exhibition from the Music Archive of Monash University (MAMU) will also make part of the conference.

Kate Moore is an Australian-Dutch composer currently resident in the Gallop Composers House in Perth, Western Australia after being based in The Netherlands for some years. Moore has studied with Australian composers Larry Sitsky, Jim Cotter, and Michael Smetanin; Dutch composers Louis Andriessen, Martijn Padding, Diderik Wagenaar and Gilius van Bergeijk; and American composers David Lang, Julia Wolfe and Michael Gordon. In June 2017, Moore became the first woman to win the Matthijs Vermeulen Award from the Dutch government for her composition The Dam, commissioned for The Canberra International Festival. She has recently been active campaigning for opportunities for women composers in a range of forums, from funding to concert programs.

Caroline Kennedy is an artist and academic working primarily in music and visual art. She has maintained a practice of songwriting and performance over many years, has been nominated for multiple ARIA awards and has released over ten albums including the recent US release of No Language, an album of improvised songs with her band Caroline No. Her work explores issues of romanticism and individuality through the critical prisms of feminism and post-capitalism. She is currently Head of Program for The Bachelor Of Songwriting And Music Production at Melbourne Polytechnic, a degree she wrote that educates artists who create original music.