We are renowned as a leader in teaching, research, and external engagement, with a balance of theory, practice and experiences that better prepares our graduates for the opportunities of the future in the legal profession and beyond.

We are part of a large connected legal community and have the power to make a real impact here in Australia, and also around the world. We collaborate with some of the very best legal minds, with the support and facilities you’d expect from Monash University, an Australian Group of Eight university.

We look forward to welcoming you to our community.

The Faculty is looking to appoint a number of outstanding academics to a range of roles. We are interested in appointing academics in all areas of law relevant to our teaching, research, and engagement. We also have particular needs in specific fields of legal teaching and research, as outlined further below.

Areas of particular teaching and research need include:

Our culture is one that welcomes all and embraces diversity. We are firm believers that our people are our most valuable asset, so we work to grow and diversify the skills and successes of our staff. We invite you to apply to join us as part of our dynamic learning programs and high-quality research environment.

Your application must address the selection criteria and we encourage you to keep your application concise and relevant (within 15 pages). Please refer to "How to apply for Monash jobs". If you wish to apply for multiple opportunities please detail the levels in your cover letter.

We encourage you to include the following in your application form:

We support and encourage applications from Aboriginal and Torres Strait Islander people, and people of all abilities, cultures, sexual orientations, and genders.

Why work at Monash University?

At Monash, we have achieved an enviable reputation both locally and internationally.

We’re proud to be:

Our motto Ancora Imparo (“I am still learning”) reminds us that the search for knowledge should never end. We are fired with a restless ambition that pushes us to do things better, to set new benchmarks and break new ground.

As articulated in the Monash Strategic Plan, Impact  2030, we are driven to address the challenges of the age for the betterment of our communities, both locally and globally. Our strategic goals to be Excellent, International, Enterprising and Inclusive, have been redefined for the next decade to support the University’s response to climate change, preserving geopolitical security and fostering thriving communities.

Monash is an Equal Opportunity employer that is committed to being fair, equitable and sensitive to the diverse needs of its staff. Within the Faculty, we embrace diversity and welcome all the experiences that you’ll bring to the role.

Learn more about the lifestyle benefits, campus life, and how we support your physical and mental health on the Why Work at Monash website.

When you work with Monash Law you get to work with world leading academics who produce research that has impact. We have academic staff with diverse research interests who can provide mentoring and supervision. In addition, we have a strong network of alumni and industry leaders from the legal community who provide our staff with a strong connection into the profession providing enhanced opportunities for professional development and collaboration. This includes distinguished colleagues such as current and former members of the Judiciary. Monash Law provides an exceptional platform to expand your network and build your academic career.

We’re more than a degree. It is what our students take away when they leave the Monash Law Faculty that has the most impact. We believe practical experience is essential to a modern legal education. Through our clinical legal education program – the first to be offered in Australia – our students are guaranteed an opportunity to work with real clients, on real cases, under the supervision of legal experts. We pride ourselves on developing and graduating market ready legal professionals.

A BEST IN CLASS MOOT COURT

Our multi-functional, state of the art Moot Court facility – the first of its kind in Australasia - fosters student engagement, develops our students’ advocacy skills and encourages research ingenuity.

Designed by internationally acclaimed architects Jackson Clements Burrows, the Moot Court was shortlisted for the Australian Interior Design Awards. It has even been used for a real sitting of the Victorian Court of Appeal in a criminal matter, making it the first time in the Court’s history that it has sat at a university.

Explore the court with our 3D virtual tour of moot court.

BUILDING FOR THE FUTURE OF LAW

The University has invested significantly in the revitalisation of the Clayton campus to ensure the creation of modern inspiring spaces where our students have the support they need to reach their full potential and where ideas can flourish.

The Law Library includes the latest technology and research tools, quiet areas for reading and research and group study rooms. 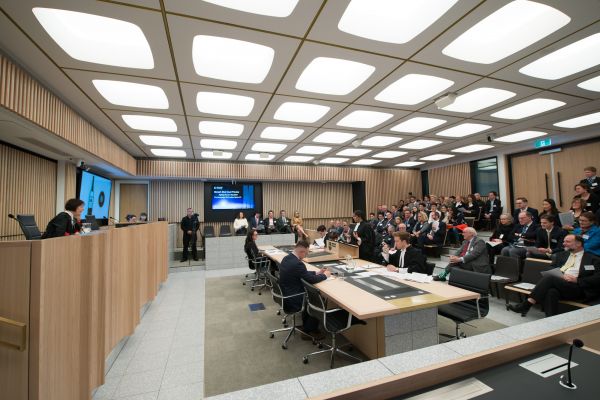 Monash Law has a strong commitment to diverse and innovative forms of high-quality and cross-disciplinary legal research that has governmental, professional, and social impact. As a member of the Group of Eight research-intensive universities, we have a vibrant research culture supported by research centres and other groups.

Australia is progressive, thriving and beautiful. Our cities are urbane and cosmopolitan, and our landscapes range from pristine sandy beaches to perfect snowy mountains.

We're also one of the world's most culturally diverse nations. In the Australian state of Victoria, 45% of people were either born overseas or have a parent who was born overseas.

In Melbourne, the capital city of Victoria, you will hear people speak more than 150 different languages. Melbourne is safe, well-designed and easy to get around.

Melbourne is home to major sporting events, including the Australian Open (tennis), the Boxing Day Test (cricket) and the Spring Racing Carnival (horse racing). In winter, Melburnians flock to the Australian Football League (the AFL, or just 'the footy') – pick a team and join in.

Melbourne is famous for its coffee, thanks in large part to the influx of southern European migrants that came here in the 1950s. We also love food, enjoy a variety of ethnic cuisines, and celebrate a food and wine festival each March.

Melbourne enjoys a true seasonal climate with sunny summers, mild autumns, crisp winters and warm springs. Don’t be surprised if you experience all four seasons in one day.

The city is always alive. You’ll find Melburnians unwinding at bars, beaches and restaurants all year round.