Living with COVID-19 restrictions in
Australia

How are you? Living with COVID-19 restrictions in Australia

Australia has rarely experienced anything on the scale of COVID-19 and the restrictions designed to limit the spread.

During July and August 2020, Monash University conducted a second anonymous online survey to see how people in Australia were experiencing life during the COVID-19 pandemic as restrictions are eased in some states, and to ask what the government could do to help recovery.

Results of the first survey

Almost 14,000 responses to the first survey were recorded from people aged from 18 to 90 years. They came from all Australian states and territories and from rural and urban areas.

This was the largest survey of nationwide mental health during the height of the restrictions in Australia. It was available online from 3 April to 2 May 2020 and was completed anonymously.

A statistical process called weighting ensured that the results are likely to reflect the experiences of the population as a whole.

The survey found a widespread increase in psychological symptoms, including anxiety, depression, and irritability that people attributed to the COVID-19 restrictions. People experiencing the worst symptoms were more likely to have lost their jobs, be caring for children or other dependent family members, or to be living alone or in an area with fewer resources. Nevertheless, on average people were more optimistic than pessimistic about the future and many described good things that had happened to them because of the restrictions.

The Medical Journal of Australia has published the results as a pre-print. The paper should soon be available after final review.

The results of the second survey will be available soon.

This study is being led by Professor Jane Fisher, Director, and Dr Maggie Kirkman, Senior Research Fellow, from the Global and Women’s Health unit at Monash University’s School of Public Health and Preventive Medicine.

This research was made possible by a generous donation from Professor John McBain and Dr Penny Foster. Neither the researchers nor the donors have any conflict of interest in the research. 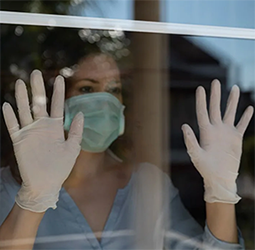 Professor Jane Fisher and Dr Maggie Kirkman recently applied their knowledge to the coronavirus pandemic, sharing their thoughts on the problems associated with disenfranchised grief in Monash Lens.