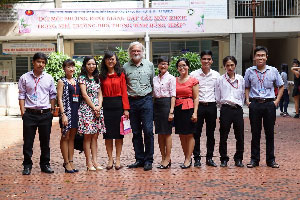 With the introduction of quality assurance and accreditation requirements for Vietnamese universities, academics are under increasing pressure to improve their research outcomes. Although there are tentative moves to develop improved library support for researchers, past research indicates that there  are many impediments relating to librarian-faculty collaboration, including: staff capacity, the limited availability of academic information resources, teaching methods, and foreign language barriers.

Those programs that do exist focus on a combination of infrastructure development at the national level, e.g. consortia-based access to e-journals, and related librarian training, which aim to bring researchers into a mainstream publishing paradigm. This is important, however contemporary researchers  work within an increasingly complex information framework, due to new means of communicating research results, moves to open access, new measures of research impact, and new forms of research output, such as datasets.

This project aims to increase our understanding of researcher needs within developing countries, and ways of meeting those needs. It will adopt mixed methods, combining a case study approach focusing on two universities, Vietnam National University of Social Sciences and Humanities in Ho Chi Minh City,  and Hanoi University, to gain a rich understanding of the current state of play and the constraints within which the various stakeholders operate, with a more broad-based survey of researchers and librarians across a range of institutions. It will provide a source of strategic advice for universities  and academic libraries in the development of IL to support research staff and improved librarianship curricula.

This project aimed to increase our understanding of researcher needs within developing countries, and ways of meeting those needs, particularly on the part of academic libraries

The project progressed mostly according to plan, with the man exception being that due to the later than anticipated data collection process, it was not possible to present at the Monash co-hosted Engaging with Vietnam Conference. Following the completion of the initial literature review, the methodology was finalised and ethics approval obtained (MUHREC Approval CF15/4307 – 2015001849) in late 2015, T. Denison visited both universities in the week beginning January 4, where he gave guest lectures as part of introductory workshops on the project on the project and met with library and research staff, and directors of research for the respective universities, as well as members of the Faculty of Library and Information Science in HCMC. He also discussed the project, data collection and analysis, and planned workshops to be held late April 2016.

Data collection commenced in early 2016. A total of 32 interviews were conducted with academics, research and senior administrators from Vietnam National University of Social Sciences and Humanities in Ho Chi Minh City, and Hanoi University.  Interviews were conducted with academics, research and senior administrators in both universities, and the results transcribed and translated. An initial analysis was completed and used as the basis for workshops in HCMC (April 26/27) and Hanoi (April 29). The HCMC workshop had approximately 40 participants, drawn from the LIS Faculty and the library, and included a limited number of librarians from other universities. Preliminary results were presented, feedback sought, and additional information collected. The Hanoi workshop was in two parts – with part 1 following a similar, if truncated pattern to that in HCMC, and the part 2 thrown open to the broader community of academic librarians in Hanoi. Approximately 120 attended.

Following on from the April workshops, data analysis was completed and the results finalized. Key findings related to the difficulty of maintain access to and discovery of research materials in a resource-strapped and rapidly changing environment, a lack of relevant and up-to-date skills on the part of both researchers and librarians, and a lack of liaison between the two groups.

A paper, “Information literacy for research: Case studies of 2 Vietnamese Universities"  by T. Denison, H.T. Pham & T. K. T. Ninh was submitted to the journal Library and Information Research (A ranked), in September 2016.

Although the project as designed is now complete, there has been intense interest from a range of Vietnamese universities and agreement that the findings will be used as a starting point for further research, particularly with regard to the changing nature of scholarly communications and the scholarly record. It is planned to hold a meeting of interested researchers at Hanoi University in December, including those involved in this project, and staff from VNU- International School, to further develop a new proposal, firm up participants, and identify potential sources of funding.