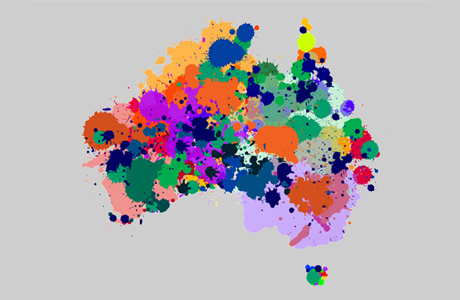 Maps enable exploration of the extent of concentration and segregation of cities using a range of indicators. A key basis for concentration is economic status. Economic status can be mapped using a number of census variables, including income, occupation, labour force participation, housing costs and educational attainment. The impact of ethnicity on residential distribution can be explored through variables of birthplace, language and ancestry. Language use indicates that in regions of Melbourne more than 70%, and in regions of Sydney more than 80%, of the population speak a language other than English.

This section features 2006 and 2011 maps illustrating the distribution of selected birthplace groups for Australia's five major cities. The 2006 maps were generated by MapStats and the 2011 maps by TableBuilder (which has now replaced MapStats). This section also provides links to 2011 and 2016 maps displaying birthplace data for Melbourne, Sydney and regions throughout Australia.

Additional population maps may be generated online using TableBuilder at Australian Bureau of Statistics Census Data. The program requires users to first select a Dataset (eg, Cultural Diversity) and then a Geographical Area (eg, a suburb) and a Classification (eg, country of birth of a person).