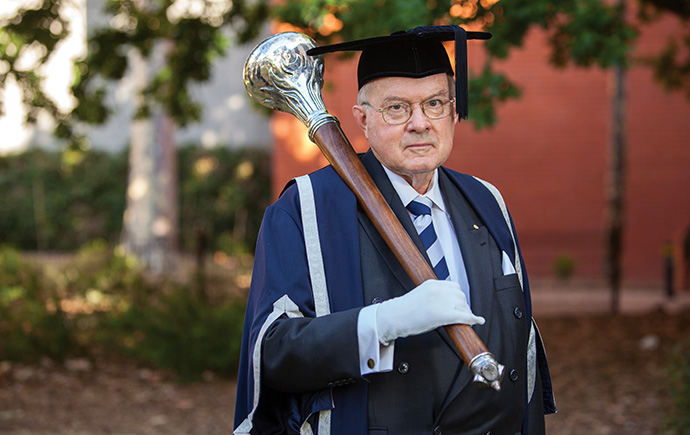 Dr Brian Corless OAM, who died two days short of his 87th birthday on 7 March 2022, was the heart and soul of graduation ceremonies and an indispensable adviser to Chancellors and Vice-Chancellors.

As Esquire Bedel he went above and beyond the call of duty. While this was nominally a part-time appointment, Brian made himself available at all times to coordinate graduation ceremonies in Australia and overseas. He enhanced the ceremonial aspects of the University immeasurably; his dignity and gravitas in processions as bearer of the mace, coupled with meticulous planning and attention to detail, ensured that all Monash students and their families experienced a memorable graduation day.

His in-depth study of the historic Coat of Arms of the University carried out in his own time led to the amendment of the University testamur and redesign of the University flag to properly reflect the Arms formally granted to Monash in 1963. The redesigned flag now flies at every Monash campus in the world.

His dedication and skill as a teacher influenced generations of  boys, which was recognised by his designation as a Distinguished Teacher of the School. During his time there, he was awarded a prestigious international Teaching Fellowship and authored the English Grammar textbook, Formal English, published by ANU Press.

Brian threw himself enthusiastically into extracurricular activities such as directing and producing school plays and musicals, acting as an officer of the school Cadet Unit and coordinating all school ceremonial activities.

In 1990, he took up a position as Administrative Officer at the Caulfield campus of the Chisholm Institute of Technology, which soon afterwards merged with Monash. In 1997 Brian moved to the Clayton campus  as Graduations and Examinations Officer.

In addition to his contribution to education, Brian had a long-standing involvement with the Anglican Church of Australia through St George’s Parish in Malvern where he served as Secretary to the Parish council, as Parish Archivist and as Lay Assistant in Worship.  Brian’s much anticipated history of St George’s Parish, to which in a wicked moment he gave the working title Blue Blood, Blue Ribbon and Blue Rinse, sadly remains unfinished.

In 2011 he was awarded the Medal of the Order of Australia (OAM) for service to education and to the Anglican Church.

On 18 December 2013, at the last graduation ceremony in which Brian participated before retiring from his role as Esquire Bedel, Monash awarded him the degree of Doctor of Laws honoris causa for his extraordinary service to both the secondary and higher education sectors in Victoria. He was appointed an Honorary Associate Professional in the Office of the President and Vice-Chancellor.