Kevin Rudd’s Indigenous apology: sorry, but not much has changed in 10 years 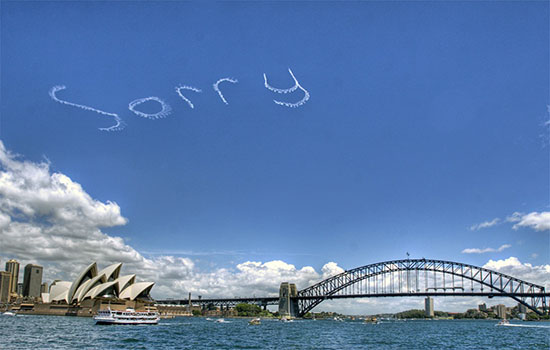 On February 13, 2008, then-prime minister Kevin Rudd issued an apology to Australia's Indigenous peoples on behalf of the Federal Parliament. Now, with a decade of hindsight, the national apology can be seen to stand as a momentous, but ultimately futile, gesture.

In the days leading up to the event we had advertised via email that we would like to share breakfast with anyone who might like to join us to watch the historic occasion. Pastries, fruit juice, and coffee was served at 8.30, with the telecast beginning just before 9am.

None of us had any idea how many people might turn up and we were pleasantly surprised when more than 150 of colleagues joined us.

At about 9.10am the Prime Minister began:

That today we honour the Indigenous peoples of this land, the oldest continuing cultures in human history.

We reflect on their past mistreatment.

We reflect in particular on the mistreatment of those who were Stolen Generations – this blemished chapter in our nation's history.

The time has now come for the nation to turn a new page in Australia's history by righting the wrongs of the past and so moving forward with confidence to the future.”

In a little under half an hour Mr Rudd concluded, noting his desire for a future where all Australians had the opportunities and advantages of living in this prosperous and “lucky” country.

Those who were present on the lawns outside of Parliament that day speak of the joy, euphoria and delight they felt as non-Indigenous Australians said “sorry” (worn on hundreds of t-shirts), and Indigenous people responded with “thank you” (also emblazoned on shirts).

Of course, this was a self-selected audience and dissenters were unlikely to attend what became a huge celebration. Even in Parliament there was overwhelming but by no means unanimous support.

Western Australian Wilson “Ironbar” Tuckey loudly recited the Lord’s Prayer as he left the chamber before Mr Rudd began – perhaps missing the irony that many Indigenous people are also Christian. Several other members of the government boycotted the event, though the only one to remain in the government to this day is Peter Dutton, the Minister of Home Affairs.

Despite the well-meaning intentions, Indigenous people continue to be over-represented in the criminal-justice system and underrepresented in academia, government, health and medicine, media and more.

Anniversaries, especially around ones such as 10 years, provide useful opportunities to reflect.

The apology was undoubtedly a watershed moment. It had been preceded by years (indeed generations) of denial, accompanied by a refusal to offer any sort of acknowledgment, let alone an apology.

In the decade since, how much has really changed in terms of race relations, and Indigenous disadvantage?

Despite the well-meaning intentions, Indigenous people continue to be over-represented in the criminal-justice system and underrepresented in academia, government, health and medicine, media and more.

How, then, do we view the national apology that appeared to herald a new phase of Indigenous and non-Indigenous relations?

The apology and the response by the leader of the opposition, Dr Brendan Nelson, were filled with potential, with promises that the future would be better. More resources would be made available, more culturally appropriate advice would be sought, and the implication was Indigenous matters would be a national priority.

In the days after the apology I needed to take a taxi from Clayton to the airport, and the taxi driver asked me which part of the University was I from. When I said indigenous studies, he responded: “Oh, that’s right, we all get on now, don’t we.” It was a stark reminder that for all the emotion and meaning of the national apology, little on the ground had really changed.

Ten years on, I still hold that same sense – little has changed and progress is glacial.

This article was first published in Monash Lens.