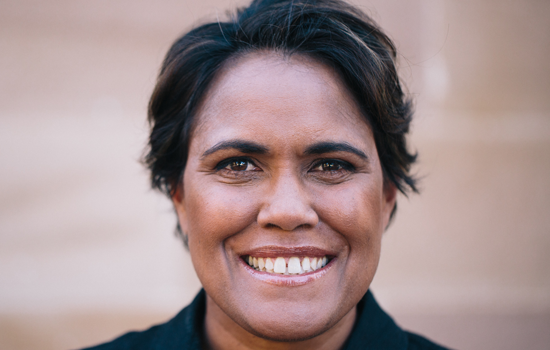 Cathy Freeman is a proud Kuku Yalanji woman. She is also an Australian Indigenous Olympic champion. In 1994 Cathy won gold in both the 200m and 400m at the Commonwealth Games in Victoria, Canada. At the Atlanta Olympic Games in 1996, she won silver with a personal best time of 48.63s in the 400m. She was crowned World Champion in the same event at the World Athletic Championships the following year, was awarded Australian of the year in 1998, and was again World Champion in the 400m in 1999.

Cathy's most notable achievement, however, came in 2000 at the Olympic Games in Sydney. She became the first competing athlete to be invited to light the Olympic flame at the opening ceremony. She then went on to win the gold medal in the 400m, realizing a life-long dream. Cathy has had a long-term commitment to meditation which was not only a vital part of Cathy's mental preparation for her exceptional athletics performances on the track, but has remained an important source of inspiration in her life. Among Cathy's other notable achievements are:

Cathy has deep community engagement and has been ambassador for organisations such as Inspire and Cottage by the Sea. She founded the Cathy Freeman Foundation, which works with remote Indigenous communities to close the gap in education between Indigenous and non-Indigenous Australian children by offering incentives for children to attend school.