In addition to leading a productive laboratory, Professor Rosa is also the Deputy Head of the Centre of Excellence for Integrative Brain Function (CIBF) and the head of Monash BDI’s Neuroscience Program. The CIBF is an ARC-funded multidisciplinary program across six Australian Universities, one Medical Research Institute and eight international partner organisations, focused on research at the interface between Neuroscience, Physics, Mathematics and Computer Science. He is in charge of major international alliances, as well as coordination of the "Neural Circuits" research theme.

Professor Rosa was the Head of the preclinical division of the Monash Vision Group (BionicEye) (2010-2014), created following a successful bid to the ARC’s Special Research Initiative on Bionic Vision and Technology. This program developed a brain stimulation device capable of restoring some visual sensation to people rendered blind by loss of the eyes or optic radiations. Professor Rosa was in charge of team entrusted with testing of successive versions of the device, in both monkeys and rodents, gathering data on safety and effectiveness. The device was approved for a clinical trial in March 2018. This program is a major example of the value of the research on non-human primates conducted in Professor Rosa’s laboratory focussed on translational outcomes, and has resulted in close alliances with the medical device industry.

Other leadership roles include:

1. Neurophysiology
In this project we investigate the mechanistic bases of perception, using physiological techniques to probe how neurones in different brain areas are activated by sensory stimuli, and how this activity helps explain what we see, hear or feel.

2. Brain Mapping
This project’s aim is to define how the cortex is subdivided into areas, the topographic maps that define the internal organisation of these areas, and how these maps have changed in mammalian evolution.

3. Neuroinformatics
Here we collaborate with physicists and mathematicians to extract meaning from large-scale datasets on the anatomy and physiology of brain circuits. The major effort is directed towards the Marmoset Brain Connectivity Atlas.

4. Human Brain studies
In this project we apply the knowledge obtained in animal models to understand the anatomy, physiology and development of the human brain, including work on brain-computer interfaces to restore some visual sensation to the profoundly blind.

5. Development and Plasticity
We try to understand how the brain circuits form, and what happens to them when they are affected by disease or lesions. A major part of the current work is devoted to the impact of lesions of the occipital lobe, and how to restore vision in such cases.

6. Neuroanatomical studies
In this project we are attempting to understand the vast circuit formed by interconnected neurones in the mammalian brain. This project is primarily based on neuroanatomical tracing techniques.

7. Cytoarchitectural studies
We investigate the fine structure of the brain, looking at how the different cell types organise in 3 dimensions to create diversity of function. In recent years, this type of work has incorporated a significant component of neuro-informatic approaches.

For an updated list of my projects and publications (and to make reprint requests),visit my Research Gate profile. Lateral (top) and medial (bottom) views of the marmoset cerebral cortex, showing the distribution of
neurons (black points) that form synapses with the region indicated by red cones. 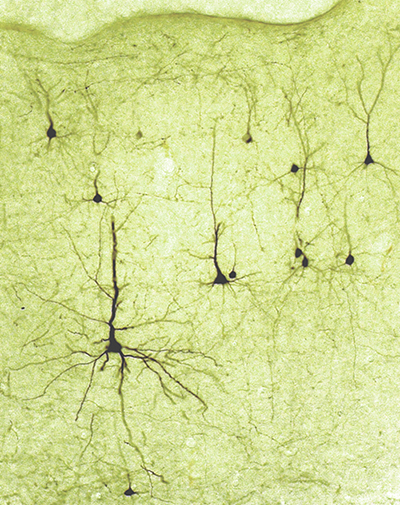 Photo shows BDA-labelled pyramidal neurons in layers 3 and 5 of the marmoset superior temporal
polysensory area of the cerebral cortex resulting from a tracer injection into the auditory core region.

Non-human primates have provided some of the most fundamental insights on human brain function, but in the late 1990s marmosets were still a niche species in neuroscience. I was one of the first to recognize the potential of preclinical studies in this species to take advantage of advances in technologies for large-scale electrophysiology and cellular-resolution imaging, as a link between studies in rodents and humans. This realization led me to map the organization of the marmoset cerebral cortex, particularly with respect to visual and association areas, and to develop techniques for successfully recording neuronal activity, anatomical tracing, and large-scale neuroinfomatic analyses. These techniques have since become standards in the field, having been adopted by other groups for 2-photon, optical and haemodynamic imaging. I have trained a large proportion of the current Australian scientists working on non-human primates, and 11 international visitors who came to my laboratory to learn techniques.

Lesions due to stroke or trauma in the occipital lobe cause blindness, which can be complete or restricted to part of the visual field. My work has identified areas of the visual brain that remain active after such lesions. I want to find out if these areas can be used to partially restore vision. This project will study the potential roles of different surviving areas, how brain cells rewire their connections in response to damage, and how rehabilitation programs work at the cellular level. In addition to work conducted in Australia I have formed a wide network of collaborations to support the development of non-human primate models, leading to co-authored papers with researchers in the US (e.g. Cold Spring Harbor Laboratory, NYU, Boston), Japan (RIKEN), the UK (UCL, Oxford), Norway (Oslo), Italy (Bologna) and France (CNRS Toulouse, INSERM Paris) among others. These collaborative studies have been the subject of influential reviews (e.g. Nature Reviews Neuroscience 2017) and highly cited papers (e.g. Front Neural Circuits 2014; Cerebral Cortex 2016, 65 cites).

The Rosa Lab offers a variety of Honours, Masters and PhD projects for students interested in joining our group. There are also a number of short term research opportunities available. 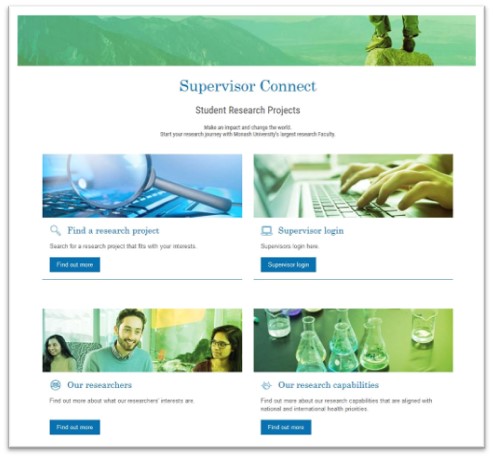