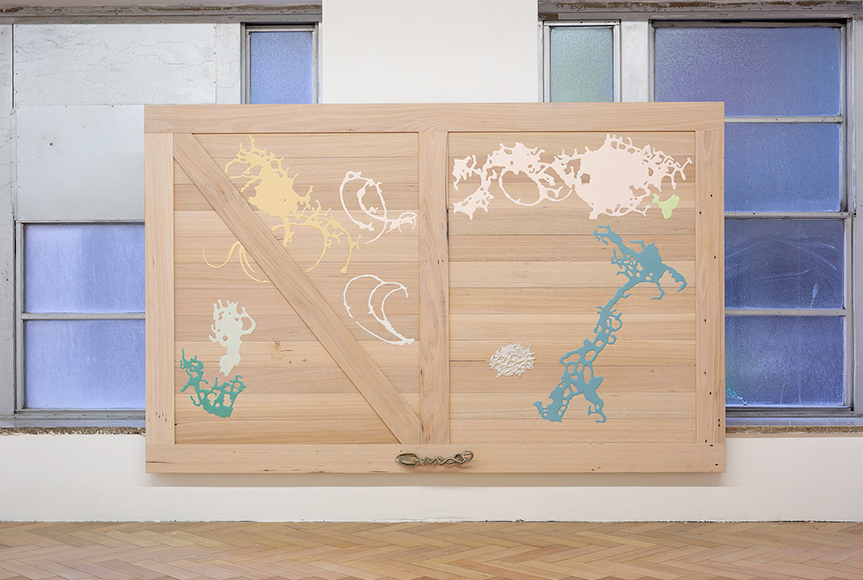 Meticulously crafted in Victorian Ash by Melbourne-based artist, Fiona Abicare, Barn Door 1 is a large-scale model of a barn door. Its timber surface is embellished with whitewash. Pewter cutlery servers in the style of high-end Italian fashion house Roberto Cavalli and pools of coloured resin adorn its front. Displayed on its side, this sculpture was made for Rose Moon, a 2019 exhibition at Melbourne’s West Space that formed part of the institution’s solo commission series dedicated to some of Australia’s most interesting mid-career woman artists, like Abicare and her peers Lou Hubbard and Lisa Radford.

Influenced broadly by modernism and its interaction with art, design and architecture, Abicare’s practice also absorbs and reflects more minor cultural histories, personal memories and other embedded associations such as fashion and film. She conceives of space itself as an art object, and employs sculpture, photography and interiors as elements in a complete environment filled with evocative visual props. As such, Abicare’s creative process has a historical relationship to the ‘total artwork’—the gesamtkunstwerk—of modernism. Often drawing on long-term collaborations with various artisans, she highlights the importance and value of aesthetic considerations such as colour, form, shape, texture and material.

This staging of narratives, and Abicare’s use of specific materials and methodologies that re-purpose her deep design knowledge, allow her to create a space in which art and design blur and the contribution of women is focused. Rose Moon, which explored the origins of the interior design style Shabby Chic in relation to art history and feminine aesthetics, addressed a number of historical art and design references—most notably self-taught artist Janet Sobel, and Rachel Ashwell, a leading contemporary proponent of Shabby Chic.

Janet Sobel (1893–1968) was an abstract expressionist who exhibited drip paintings in 1944, pre-dating the better-known Jackson Pollock’s adoption of the technique. On Barn Door 1, Abicare depicts a re-creation of specific paint drops from a selection of Sobel’s paintings (Milky Way,1946, and an undated work Music). Rendered in a medium commonly referred to as ‘imitation glass’, these drips are here paused, frozen in softly hued pastels common to the Shabby Chic aesthetic. The re-creation of Sobel’s drips, originally blown by Sobel using a vacuum cleaner across her canvases (in contrast to the hyper-masculinity of Pollock’s well-documented, whole-body action painting), hints at the secret worlds of unrecognised, women artists that Abicare is keen to celebrate.

Rachel Ashwell, a California-based designer, has built a business empire out of her Shabby Chic style, boasting a celebrity following of her fashion line, home goods, books, TV shows and blog. The Shabby Chic aesthetic was prevalent in Abicare’s own coastal upbringing in Victoria, and she has cited her interest in understanding its history. A key feature of Shabby Chic is its dedication to a softly ‘distressed’ or weathered look, which is evident in Abicare’s ‘washed’ barn door. This style pervades the exhibition, which is replete with a number of domestic and ‘outdoorsy’ references—drawers displaying various items, a curved couch, a second barn door, a wagon wheel and a life cast of a jean-clad torso. Abicare’s adoption of armatures that reference domestic furniture and items, in this case the door, is typical of the artist’s layered approach; she often re-makes functional objects as composite sculptural works.

As much of Abicare’s work aspires to, Barn Door 1, and the larger Rose Moon exhibition, address the perceived divisions that exist between high and low cultural forms. Within a single environment she brings together ‘fine’ art and its more highly consumed extensions of design, fashion and craft (all somewhat historically gendered domains) to consider the multiple histories of women, both pioneering and commercially successful, whose often unsung contributions are firmly part of our present-day visual domain.