This series of prints was made as a response to the Yirrkala community’s reconnection with a collection of mounted string figures, made in 1948 by anthropologist Frederick McCarthy and held in the Australian Museum, Sydney. String figures, otherwise known as cat’s cradles or matjka (the Yolngu term) are patterns or designs made with a loop of string on the hands, ‘assisted by the teeth, neck, elbows, knees and toes when necessary’.[1] Although string figures are usually executed by a single person, some designs require two or more participants. In Yirrkala today there is a popular repertoire of simple string figures and tricks that just about everyone knows. The extensive lexicon of designs recorded in 1948 is no longer current, but there remains a basic ‘literacy’ in handling and manipulating the string. As a PhD student researching the significance of the museum collection (2008–12), I worked with a group of older Yolngu women who engaged in the process of remembering how to make the designs they once knew. These prints are the result of a collaboration between the women string-figure makers and me, in association with the Print Space at Buku-Larrnggay Mulka Art Centre in Yirrkala, north-east Arnhem Land.

To make the prints, the designs were transferred from the maker’s hands onto soft-ground etching plates and run through the printing press, leaving an imprint in the wax medium. By putting the plates into an acid bath, etching into where the wax was displaced, these marks were made permanent and replicable.[2] This series of prints was editioned by printmaker Basil Hall using a ‘roll-over’ technique. Rather than the etched marks taking up the ink, they are left clean, the image being produced by negative white space on a positive black-inked ground.

The prints, like the mounted figures on which they are modelled, turn an ephemeral performance art into a fixed, stable, two-dimensional form. String figures themselves are never still (even when a design has been completed, the hands still move, if just slightly, to hold the figure tensioned in shape), and many are made to move, mimicking the movements of their subject. Looking at the figures in the prints – even if we don’t actually know that the body of the caterpillar crawls along, animated by the movement of the hands, or that the wings of the brolga flap – the loopings, crossings and twists of the string itself inscribe movement, inferring the process of their physical making. And even if we don’t know that this particular loop is secured by a big toe, that one by a knee, the scale of the figures and their common bilateral symmetry make the body – the person that made them – an absent presence in this work.

We could think of string figures as a kind of rule-based systems art – patterns formed through the permutations and combinations of movements made using two hands, five fingers and a piece of string. In laying the figures down onto the support, however, the random energies of chance play against the formal order of pattern. When the figures are collapsed from three dimensions into two, released from the frame of the hands, the natural life of the string and happenstance take over. Designs that are apparently technically the same can look quite different: system and order interact with randomised disorder and entropy. Considering this play from a distance, the eye stops and moves in on the fine, textured detail of hand-spun and -plied bush string.

Robyn McKenzie is a Research Fellow in the School of Archaeology and Anthropology, at the Australian National University, Canberra.

[2] The technique used was first developed in consultation with printmaker Heather Burness for a series of five string figure prints made in 2010. 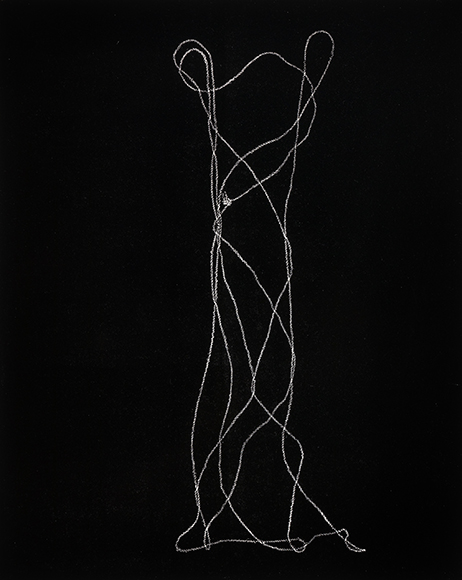 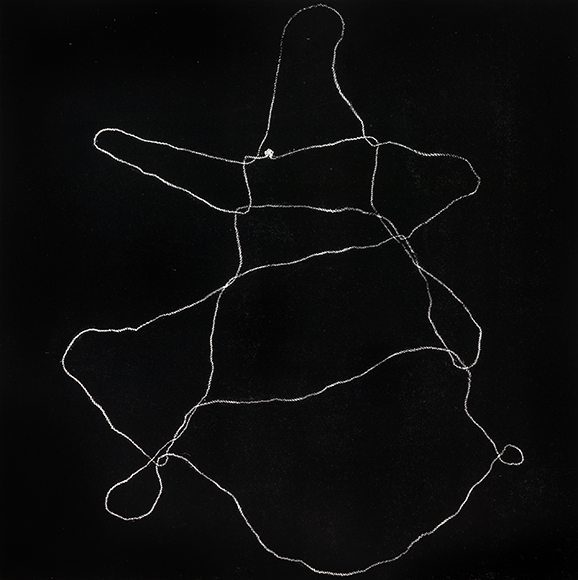