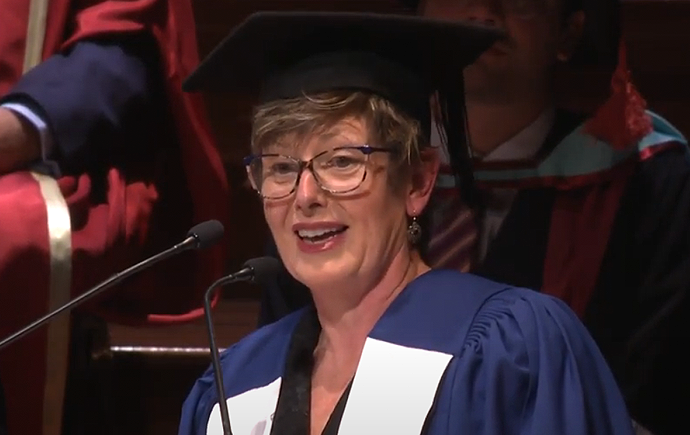 Anna Burke is comfortable being described as ‘the Steven Bradbury of politics’. In 1997, she accepted preselection as federal Labor candidate for Chisholm, a Liberal stronghold for then health minister Michael Wooldridge in southeastern Melbourne that takes in Monash University.

She immediately rang her husband, Steve Burgess, reassuring him she couldn’t possibly win. After all, the couple had a lot on their plate: they were renovating a house in Newport, Burke was in the thick of delicate enterprise agreement talks with ANZ on behalf of 22,000 Finance Sector Union workers, “and I was trying to get pregnant”, she adds.

Suddenly, Wooldridge switched seats. And so, like Bradbury – the Australian ice skater who won gold in the 2002 Winter Olympics by not falling over – after a well-fought campaign, on 3 October 1998, Burke found herself blinking incredulously into television cameras, the new federal member for Chisholm.

A year later, her first child, Madeleine, was born. “I went back to Parliament when she was three weeks old,” Burke recalls. “[Liberal MP] Jackie Kelly and I were really the first women in Parliament to have babies. Nobody knew what to do. Steve took 12 months off work and we flew up and back so I could feed Madeleine. There was no childcare centre and no support.”

The argument for education

Burke grew up in Ashwood, a southeast suburb of Melbourne, in the heart of Chisholm, one of five children. Her mother trained as a teacher, and her father was an electrician who worked for the Commonwealth Bank and did part-time jobs on the side to help pay for the children’s Catholic school fees. “Education was incredibly important to my parents,” Burke says. “Both of them are highly intelligent and capable human beings who just didn’t come from the time when you could easily get an education.”

Adding a degree of difficulty to Burke’s path to university was her dyslexia. Nevertheless, she took her HSC exams orally and, in 1984, secured a place at Monash University studying arts.

“I wanted to know how to think and study and progress an argument,” Burke says of her reasons for choosing arts. “I just wanted to get a good degree that would help me probably crack a graduate job somewhere.”

Burke took to university with vigour, joining the Newman Society, a ‘Catholics on campus’ social group that sparked friendships that have lasted until today. She majored in English and politics and, despite mostly eschewing student politics (“I was interested in the bigger picture,” she says), in her honours year, in 1988, she joined her local ALP branch and also the Monash ALP executive, convinced by now-Opposition Leader Bill Shorten (“they needed a girl”). She also was elected as a student representative on the Arts Faculty Council.

With her record for contribution, Burke easily found a graduate job, joining VicRoads and developing an interest in industrial relations. While there she studied a Master of Commerce at the University of Melbourne, majoring in industrial relations, then worked at Victoria University. Finally, she found her job as an industrial officer with the Finance Sector Union, which brings us back to her unexpectedly successful tilt at politics.

In the hot seat

After a decade in opposition, Labor won government in 2007, led by Kevin Rudd. Burke began as deputy speaker to Harry Jenkins and, despite an early hiccup (search ‘Joe Hockey and Kevin Rudd cardboard cut-out’ online for details), she grew authoritatively into the role.

After filling in for a year during Peter Slipper’s rocky reign, Burke finally had the hot seat to herself in October 2012, only the second female Speaker of the House of Representatives in the Parliament of Australia; Joan Child was the first.

“She was an amazing person,” says Burke of her predecessor. “She rang me up when I got the job and said, ‘Oh, don’t think you’re going to have it as tough as I did. I had Keating!’”

But it certainly wasn’t easy. A hung Parliament created tensions not only between rival parties but also within the Labor Party. “Question time was news,” says Burke, who was widely regarded for her patient, impartial handling of the office. “You are there representing the institution … I’m a member of the Labor Party, but when you’re in the chair it’s about the orderly running of the institution and the Parliament. It’s about respect for the rules.” Burke retired from politics in 2016 and, six months later, joined the Administrative Appeals Tribunal as a general member, where you’ll find her today, listening to claims and making rulings on everything from Centrelink decisions and child support determinations, to Family Tax Benefit issues and citizenship character applications.

Meanwhile, she’s still involved in the Monash community. A few weeks ago, she drove daughter Madeleine in to sit a couple of law exams (she and Burgess also have a 16-year-old son, John, in Year 10) and, last year, she was awarded a Monash University Fellowship.

Burke is proud of changes she helped implement during her party’s time in government, but ultimately hopes people will remember her to have been a good local member. “Because I think so many people forget that’s what you’re actually elected to do. And hopefully that’s the impression I’ve left behind.”

This article was originally published in Monash Lens