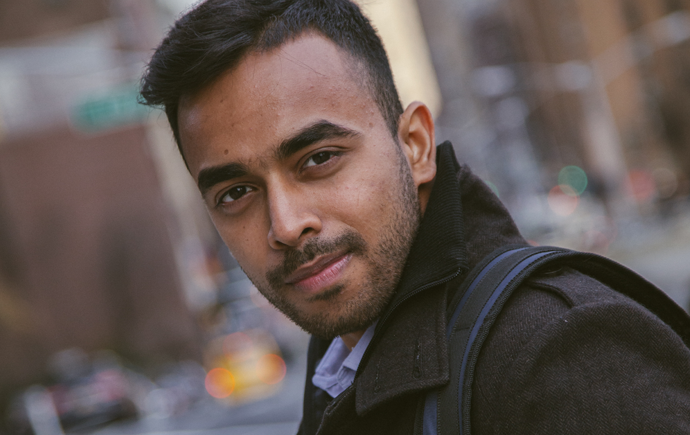 Joy Joshi moved from India to Melbourne in 2016 to complete the Master of Journalism at Monash University. Throughout his degree, Joy successfully obtained freelance work and multiple internships with institutions such as Tata Communications, Formula 1, SBS, ABC, the Geelong Advertiser and NT news respectively. Following the completion of his studies in 2018, Joy immediately began his career at the Daily Mail in Sydney. Soon after, he began working as a journalist at SBS. Due to Joy’s success in previous roles, he was able to secure a place for himself at Twitter and now works as a Content Curator for the social media giant. A part of Joy's job is to curate stories around the biggest conversations on the platform worldwide, in what he believes is the future of journalism.

Why did you choose to study a Masters of Journalism at Monash University?

I have always been interested in storytelling. During my degree in India, I began making documentaries that were well received and I won best student documentary at Bangalore International Film Festival. Because of this, I knew that I could be a successful journalist and could make a career for myself in the industry.

Despite my success as a documentary maker, I knew that if I wanted to be a journalist I needed to gain professional experience and further my knowledge so I began my search for the best university that I could go to. I chose Monash because of the practical units that were offered, which was crucial to my success in getting into the industry.

My role at Twitter is what I believe the future of journalism will look like. Twitter launched an editorial team a few years ago made up of people from across the world to provide context to the biggest conversations happening on the platform, anything from the Met Gala to the NRL for example. I work with around 90 people from across the globe to produce stories that are relevant to all Twitter users.

While we have a global footprint, it is an important task for our regional teams to curate content around conversations happening locally. Since Twitter has both English and non-English markets, our staff includes skilled bilingual professionals.

How did internships contribute to your success?

The Monash faculty and internship board gave me the opportunities to undertake roles that gave me a wealth of experience. I found that the opportunities were always there, I just had to jump on to anything I heard about. At Monash, notifications for internship positions were advertised every day by Julie Tullberg and her team, and I applied for many of them.

As an international student, internships are important in overcoming challenges you can face such as not having the networks to reach out to for experience. During my internships with local channels and newspapers, I was able to gain a better understanding of the industry, as well as the wider Australian culture. The internships opened a lot of doors for me, and I was able to use those networks to then get a job after graduating.

As a part of your studies, you went to New York as a research ambassador. Can you explain what this was like?

The opportunity to go to New York as a research ambassador was another influential reason as to why I chose to study at Monash University. Conducting research in the world’s media capital at institutions like the New York Times, Bloomberg, CNN, Buzzfeed among others meant I was immersed in the industry. It was a very inspiring experience. This opportunity was not offered by many other universities and it is a big part of the reason why I ended up at Monash.

What are some skills that you learnt during your time studying that have helped your career?

Leadership skills are highly valued in the media industry. I was the president of a student union during my undergraduate and have always possessed leadership skills, but being the Senior Producer for The Struggle, a TV show I started at Monash with my peers, meant that I could incorporate leadership into journalism and media.

I was already interning at Channel 31 when I started working on The Struggle, so the team running the local community television was aware of my skills. Which helped us get the show a weekly slot on television. Coming out of university with this experience was really important as I had been on TV and employers knew I was serious about my work. From studying at Monash, I have the ability to be a one-man team. I can shoot, record, package, frame, be on camera and ask questions of talent or interviewees.

What is your advice for people studying who want to work as a content creator in a constantly changing industry?

Often there is still someone separate doing each of these roles in a company. Learn each of these skills while you are at university, and you will be better at adapting to change.

Monash has the infrastructure to learn these skills, as there are studios, equipment, and opportunities to broaden your knowledge. Not all universities are lucky enough to have such great facilities, so as a student it was really great to capitalize upon the amenities and stand out among other graduates.