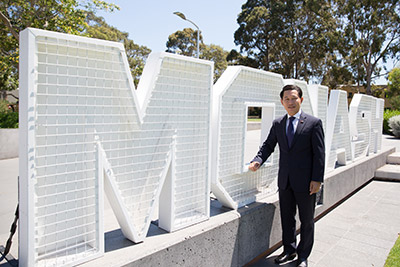 Monash University had the pleasure of welcoming back alumnus His Excellency Saleumxay Kommasith, Minister of Foreign Affairs of the Lao People's Democratic Republic. Minister Kommasith completed a Master of Arts in International Studies and Development in 1997; and was the first student from Laos to graduate from Monash.

The visit marks the Minister’s first time returning to Monash in 20 years since completing his studies. He has since forged an extensive career in government in the Lao PDR Ministry of Foreign Affairs, including a posting to the United Nations in New York.

Minister Kommasith was taken on a short tour of campus where he commented on the University was ‘barely recognisable’ due to all the new buildings and grounds, with the exception of the Menzies Building. Reminiscing about his time at Monash, the Minister laughed as he recalled how, thanks to his lecturers and the local community, he was gradually able to understand the Australian accent.

As part of the visit, the Minister had the opportunity to meet with international students from Lao studying in Victoria. He also posed for photos in front of the Monash letters.

A proud Monash graduate, Minister Kommasith credits Monash for teaching him an independent perspective, and giving him knowledge that has helped his ability to see things differently.

Minister Kommasith is one of many alumni working in government service domestically and overseas; another example of our alumni finding success after studying at Monash.