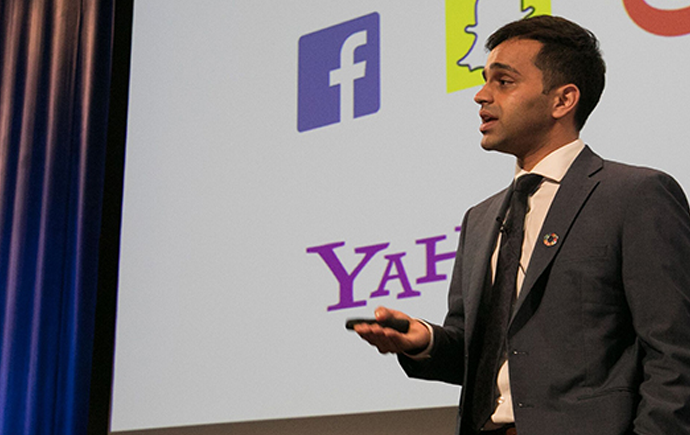 Sam’s entrepreneurial and ambitious skillset is reflected in his extensive list of achievements to date, including his feature in the 2020 Forbes 30 Under 30 list of Social Entrepreneurs.

From founding the Monash International Affairs Society (MIAS) as an undergraduate student to establishing one of the world’s biggest networks of young professionals dedicated to sustainable development, Monash Arts alumnus Sam Loni has demonstrated the unstoppable power of connecting like-minded individuals.

Working at New York based research and policy think-tank, UN Sustainable Development Solutions Network (SDSN) as a Program Director, Sam’s work centres around supporting world governments and organisations in the implementation of the Paris Climate Agreement and 2030 Agenda.

From this, he founded and currently leads what is known as SDSN Youth. A network of some 750 organisations from 100 different countries, the program trains young leaders and organisations to create cutting-edge solutions for sustainable development in their communities through practical, structured and science-based approaches. SDSN Youth has been developing an extensive sustainability curriculum for primary and secondary schools. So far, 700 schools across 72 countries are involved in the curriculum.

Sam credits his Arts degree for preparing him for a successful and meaningful career.

“My Monash Arts degree equipped me with the fundamental knowledge of international relations, political science, economics, and psychology, the combination of which has been critical for my success."

"In addition, the opportunity to connect with like-minded students and gain access to leading academics was incredible."

The establishment of the SDSN Youth program seems only a natural progression from Sam’s earlier work. From founding the MIAS, a student organisation dedicated to supporting Monash students to engage with international relations and development, he partnered with Harvard University to pioneer the world’s biggest international student conference in Australia.

The conference connected more than 2,000 students from over 80 countries during a week of Melbourne based discussions to idealise approaches and responses to some of the world’s biggest issues. Receiving national news coverage, the conference was endorsed by both tiers of the Australian government and presented Sam with the opportunity to work with the Department of Foreign Affairs and Trade

Following his degree, Sam began working at the Monash Sustainable Development Institute (MSDI) alongside Dr Tahl Kestin and Professor John Thwaites. Advocating for the implementation of Sustainable Development Goals (SDGs) in Australia and beyond, Sam’s program emerged during this time, which would later become known as SDSN Youth and take him to New York City.

What inspired you to create the Monash International Affairs Society and what did you gain from the experience working with this society?

I started the Monash International affairs Society in 2011, after having an experience of having engaged with some students at Monash who were passionate about global governance, student skills, and international affairs in a very broad sense. After I assumed the role of the presidency, I wanted to set up the organisation in a way that was able to support Monash students to understand international affairs and global governance better. The understanding was that students can learn a lot in practical real-world skills by debating, negotiating, engaging in legal writing analysis through either Model UN or through other sorts of activities. It started very small but now it’s a huge society, very successful, and one of the most active at Monash so I’m very proud of it.

It was the most prominent pathway to the career that I developed and one of the most valuable experiences at University. Having had that real world application through the Monash International Affairs Society just really complimented my studies. MIAS not only gave me a much more comprehensive and complete approach to education, but also a strong social setting to settle into.

What do you think is the value of an Arts degree? How have you applied the skills that you learned in your Arts degree to your career?

I don’t see the arts degree as just the instruction that’s delivered in the classroom, I see it as an entire experience. The arts degree enabled me to understand the power of ideas, and not just within a single discipline, in a multidisciplinary fashion. It enabled me to see the world not just through that micro lens, but also through that macro lens. There was quite a bit of room for psychology within political science, quite a bit of room for economics within politics, international affairs within economics and economics within psychology and how all of those disciplines actually interact. So it really taught me the importance of interdisciplinarity.

The second thing it taught me is to have a critical approach to the world. So this is to view the world not necessarily through single action policies, not through just one view of politics but rather through the bigger superstructure of how our system works.

The third element was that it allowed enough flexibility for me to think outside the box. With some other disciplines, the structure and framework is quite set and you are within certain confines. But with the arts degree, I found that you could question those confines and go beyond them. This allowed me to shape a future that I wanted, not necessarily within that set framework, which tends to produce the same problems over and over again.

What sparked your initial interest to pursue a career down international relations and world issues? What experiences shaped your decision to go down this career path?

The passion was always there. My parents were human rights activists when they were younger. I’ve always seen them as my heroes. When I was 9 years old, we fled my country of birth, Iran, and lived as refugees in Pakistan for a few years before we came to Australia. That experience exposed me to extreme poverty, rampant insecurity, and violence. And through that experience, I would see that the people who would get affected the worst were vulnerable individuals. So I always had this passion to help vulnerable people. Being granted the privilege of a wonderful education and living in a great country which cares deeply about its people; I kind of view what I’m doing as a duty in addition to being a passion.

What words of advice would you give to current students who are interested in pursuing a similar career-path and want to make change in the world?

The advice I would give is not to obsess over jobs. I find that kind of stress actually doesn’t help. I never thought, what can I do to get paid? I just focused on what I liked and what I wanted to do. I discovered throughout the journey that I never really asked for any money or any job, but they kind of just came along. I discovered that’s actually because when you’re doing something that adds value, there are organisations, institutions, or opportunities where you can actually go to do that full time and get paid.

I think there is this pressure created by society, the traditions of finding a job after study, and I think people obsess over that and they end up not pursuing the things that they love because they don’t think they might find a job in it. In my experience, being able to focus on what you love, and having a mission as opposed to a job is what is really important.