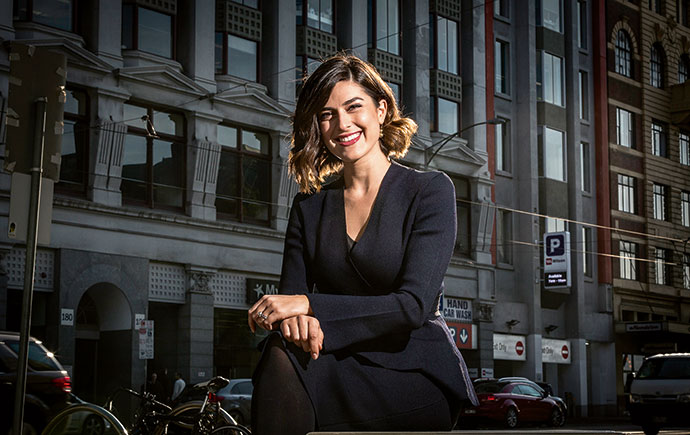 While covering the 2014 World Cup soccer tournament in Brazil, SBS journalist/presenter Sarah Abo was sleeping only three or four hours a night. It was demanding and challenging work, doing live-crosses to Australia at strange hours. She loved it.

“We had an amazing studio there, but it was crazy – I have never worked so hard in my life,” she says. “And I got to see a side of Brazil people wouldn’t normally see.”

Abo says she is still surprised – and delighted – by where life has taken her. So when she was asked to front Monash University’s new promotional campaign, she was thrilled to be teamed up with some of the University’s most celebrated alumni and researchers.

When she was preparing for the campaign, Abo wondered how it would be inhabiting the subjects’ high-flying lives.

That is the power of inspiration: to imagine yourself in the shoes of someone whose work is making a big difference and see that anything might be possible for yourself, too.

“You wonder how they got to where they are – and when they tell you about it, you do end up wondering if that’s a path you could have taken as well, and how different your life might have been. I always wonder about life as an architect.”

Abo, born in Syria and raised in Australia, has her own tale of success. As she lists some of the highlights of her journalism career, it’s easy to see why she feels fortunate: the World Cup, being embedded with the Australian Defence Force in Afghanistan, and doing a fellowship at CNN are just a few  experiences to enthral her.

Abo fronts 11 stories for the Monash campaign, which has, at its heart, a philosophy of challenging conventions with a spirit of interrogation so that we might have a bigger impact on the world. That is something Abo does, and as she found herself exploring faculties and spaces around the Clayton campus, it sparked  memories of her own time at Monash when she completed an arts degree with a major in journalism, beginning in 2004. “It was like being a student again,” she says.

Doing the campaign has been great fun, she says. The subjects fascinated her. In the new ads, she’s shown on campus fronting and narrating the stories of the prominent Monash people in areas as diverse as genocide studies, education, family violence, brain-computer interface and prototype compact housing.  They all have footage of the people involved and are tagged at the end with “Question the answers”.

Telling people’s stories is what she loves doing, and is what attracted her to journalism. Her first job in the field came midway through her honours year in 2008 when she started as a production assistant at Channel 10, eventually getting a full-time job and moving to Adelaide as a reporter for the network.

She worked there for more than two years, then was assigned back to Melbourne. Eighteen months on, in 2013, an even more attractive job at SBS came up. She took it. There, she has also remained true to her grounding, relishing all the wonderful opportunities.