Could a pandemic kickstart the re-bordering of the world?

The COVID-19 pandemic has elicited soul-searching on a global scale, about whether rapid changes in how we communicate and interact, the expectations we place on government to promote our welfare, and how we care for the environment, might transform the way we live beyond the crisis. In this speculative blog piece, I re-visit the terrain covered in a previous project aimed at imagining a possible future of transformed borders, and consider whether the pandemic might bring into view the changing social, economic and political conditions that could support a relaxation of national borders 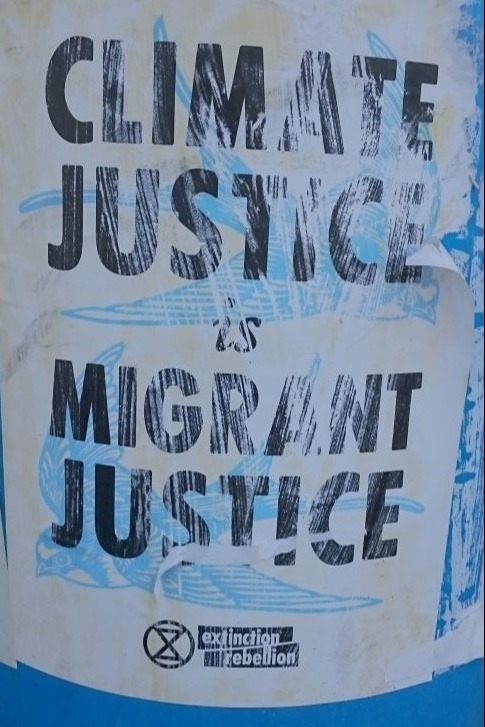 Historian Yuval Noah Harari has written recently how emergencies such as the current global pandemic ‘fast-forward historical processes’. He suggests that we have two fundamental choices at this juncture: between ‘totalitarian surveillance and citizen empowerment’, and between ‘nationalist isolation and global solidarity’. While these possibilities are perhaps overly stark, we can glimpse each of them playing out in the processes of re-bordering and border enforcement that are now unfolding.

During this phase of the pandemic, the Australian government, like many others around the world, has implemented emergency laws restricting citizen movements, increased police enforcement powers, and introduced mobility-tracking surveillance technologies. This has tilted the balance heavily towards state surveillance and away from citizen empowerment.

On the other hand, it seems the draconian measures have been accepted on public health grounds by most people, and those who have stood up against the restrictions have often been viewed as socially irresponsible.  Although there is certainly evidence of both enforcement over-reach and racial bias in the anti-Covid regime, perhaps the greater concern is that the restrictions on civil liberties may endure under a different guise once the health emergency is over, ushering in an era of ‘totalitarian surveillance’ as foreshadowed by Harari.

On the second of Harari’s themes, nationalist isolation can be glimpsed most readily in the role accorded to border control in suppressing the spread of the virus, as borders become key sites for the production of bio-security. Australia, long identified with strict border controls, and enabled by its isolated geography, initially instigated selective controls that reflected its established border control mentalities rather than public health considerations, and applied technologies previously reserved for asylum seekers, such as offshore detention. Also reflecting a nationalist sentiment, temporary residents unable to either work or return to their countries of citizenship were denied government support that was reserved for citizens.

While a tightening of borders in line with biosecurity concerns may be reasonable under the extraordinary conditions we now face, nation states have often gone beyond what is necessary for this purpose, ‘seeking refuge in national sovereignty in an effort to protect the national ingroup’ from outsiders such as migrants and refugees, and using the pandemic to reinforce the hostile environment they have already created for asylum seekers.

The picture painted so far is largely a pessimistic one in terms of Harari’s future dichotomies, and when contrary trends have emerged that reflect citizen empowerment and global solidarity, they have most often arisen from the actions of non-state actors and individuals. While optimistic voices point to new technologically driven ways of relating to one another at a distance, a re-focusing on climate change as an even greater threat to human welfare than the virus, and demands for a continuation of state support reluctantly provided by neo-liberal governments ideologically inclined towards austerity, there are also warnings about the use of new technologies to ramp up mass surveillance, a resurgence of fossil fuel industries, a rise in anti-immigration sentiment driven by high unemployment, a drop in demand for foreign labour, and a reinvigorated and authoritarian neo-liberalism.

It may therefore seem like a strange time to be questioning whether the Covid-19 pandemic could be the catalyst for a more open, and less strictly bordered world. Even so, I can’t help but wonder, as Anna Triandafyllidou has done, whether the Covid-19 crisis ‘bears within it the seeds also of transnational solidarity and the transcendence of national borders’ by ‘serving as a reminder that we have obligations not only to our own citizens and residents but also towards our joint humanity’.

The possible transcendence of national borders was the subject of an earlier project of mine, the timing of which, in hindsight, may have somewhat premature. I asked authors contributing to an edited book Rethinking Border Control for a Globalising World, to engage in a thought experiment in which they imagined a ‘preferred future’ of ‘peace at the border’.  In this imagined world, some kind of bordering might persist, but the serious harms currently being perpetrated in defence of national borders would be a thing of the past.

Rather than indulge in a utopian dream, I asked them to identify the fundamental changes in material conditions that would create conditions of possibility for a differently bordered world, and to identify any aspects of globalization that were already taking us in that direction. Each author was asked to engage in the thought experiment from the perspective of a different ‘border domain’. These domains were identified by asking the question – ‘What interests and values are national borders mobilised to protect?’ Examples included regulating access to the labour market, defending national culture, preserving social security for citizens, or creating physical security from outside threats. These are among the most commonly cited reasons used by governments to justify the securitization of their borders.

Rather than revisit the detailed arguments advanced by the authors in these substantive chapters, in the interests of brevity I will focus here on the three short commentaries that concluded the volume, and consider what the Covid crisis might contribute to realising their visions. Three world leaders in their fields - Rainer Bauböck (citizenship theory), Saskia Sassen (globalization theory) and Nancy Wonders (border criminology) – were asked to contribute some ‘blue sky’ thinking to the question of how a ‘preferred future’ of relaxed borders might be achieved.

Rainer Bauböck’s contribution stayed closest to a state-centric framing. He offered several tightly argued predictions about possible avenues for border relaxation, one of which was the enactment of bilateral agreements for free travel between particular countries, as more countries came to see benefits for their own citizens in opening up access to citizens from elsewhere. In fact, as countries begin to loosen travel restrictions imposed during the pandemic, and are ‘forced to rank different forms of movement’, a mutual ‘travel bubble’ proposed by Australia and New Zealand has been touted as a possible model for the future. While this prospect does not provide a solution to the hardening of borders in the Global North to arrivals from the Global South, it does offer a realistic first step.

Saskia Sassen argued in her commentary that novel forms of bordering were emerging out of globalization comprising assemblages of non-state agents with the capacity to create new forms of ‘enclosure’ within and outside the state. This was creating truly global institutions with decision-making authority, in contrast to the current international order which was beholden to the interests of individual states. Problematically, these structures were serving the interests of transnational corporations, so the challenge was to create similarly supra-national enclosures that supported the interests of the world’s populations within this ‘newly bordered transversal space’.

The pandemic has exposed vulnerabilities in one international organisation, the World Health Organisation, and revealed its reliance on state funding. At the same time, a new message is being expressed by other UN Bodies urging a global effort across a range of emerging planetary challenges, while potentially de-centring the role of states. The UN head of sustainable business has referred to Covid 19 as a ‘fire drill’ which demonstrates the ‘need to tie together social equality, environmental sustainability and health’ under the banner of human rights.  Whereas the state-based system has failed on this agenda, she envisages corporations being at the forefront of these transformations, driven by a younger generation that ‘don’t want to work for companies that do not have a solid responsibility strategy’. UN Secretary General, António Guterres, describes this growing engagement with planetary concerns as building a ‘fair globalisation’, and even hard-nosed financial institutions are predicting a ‘new synthesis’ in globalization characterized by ‘sensitivity to social disruption and distributional consequences’.

How these trends will play out in terms of the control of national borders is another question, and the reliance on corporations as drivers of a ‘fair globalisation’ may be uncomfortable for many. But these trends exhibit some of Sassen’s vision of the need for truly global enclosures that mobilise authority and distribute resources in new ways across national borders.

Nancy Wonders’ imagined pathway towards peace at the border also de-centred the state. However, her vision cast the world’s populations, rather than global corporations, as the main agents of change. Wonders argued that the act of border crossing itself was a transformative process of ‘bottom up’ globalisation. Conceiving of borders as sites of struggle, she noted that transgressing borders contains possibilities for both heightened border control or more liberating outcomes. Solidarity from an emerging global civil society – the subject of a separate chapter by Vanessa Barker – may tip the balance in favour of the latter.

Wonders predicted that ‘it is likely that nation-states will become even less able to control their external and internal borders in ways that provide for human security as transnational challenges like climate change wreak havoc on a world ill prepared for the kind of geopolitical and economic transformations that now seems inevitable’. Now that we are indeed on the cusp of upheavals of this magnitude, campaigns against systemic racism and global warming are deepening solidarities across borders, despite the virus, and the expanded use of communication technologies under lockdown can only strengthen this further. Moreover, there is evidence that activism related to borders and other planetary issues is converging, as posters appear in public places declaring that ‘Climate Justice is Migrant Justice’.

It may seem paradoxical to look to the possibility of relaxation of borders at a time of unprecedented constraints on human mobility, both within and between states. However, the Covid crisis has demonstrated the global nature of many contemporary human security problems and has raised awareness that the world can, and will, be dramatically different from life as we know it. The pandemic, while it may give rise to many counter tendencies, has also given us the ability to imagine a transformed world, as we live through unprecedented changes in how we live and relate to others.

But will a world that is better equipped to deal with planetary problems necessarily be a world in which national borders play a far less significant role? Imagining our preferred future doesn’t make it happen. But over time it may help to identify the pathways that could take us there.