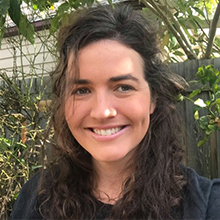 Emma McNicol is a Gender Equality Research Officer for the MGFVP Centre. Emma is an expert educator and specialist in feminist philosophy. Currently completing her doctorate at Monash University Schools of Languages, Literatures, Cultures, and Linguistics, her PhD thesis interrogates prominent Anglo-American critiques of Simone de Beauvoir’s The Second Sex. Emma is the recipient of the Cecile Parrish Memorial Scholarship, and completed a Masters of Philosophy on feminist theory in 2016. She is a Teaching Associate in both Monash’s School of Languages, Literatures, Cultures, and Linguistics and Media, Film and Journalism.

Emma is also a registered Victorian secondary school teacher and has developed and implemented gender equality and LGBTQI+  inclusive educational suites at secondary schools in the UK and Australia. She is the founder and Director of Melbourne Centre for Feminist Philosophy, is an Editorial Assistant at Simone de Beauvoir Studies Journal and has published widely on feminist theory.