Ropes on traditional watercraft are ubiquitous. They are taut, tangled, and visceral, both a symbol of safety and a workplace hazard. Traditionally organic, they hold together, quite literally, the infrastructure of sea transport. Across a range of seafaring modes, from bark canoes to outriggers to tall ships, they are essential to construction and performance. First Nations peoples in Australia made ropes for a range of purposes and from a wide range of materials, from hibiscus fibre harpoon rope to baskets of Jackie vine. For the British Admiralty, the need for ropes, especially made of flax, was one of the key drivers of British colonisation of New South Wales. Ropes as objects of fear are one of the staples in Australian convict history. Ropes and lines figure in classic literature and iconic cinema, and knotwork occupies both a practical and aesthetic place throughout global cultures. 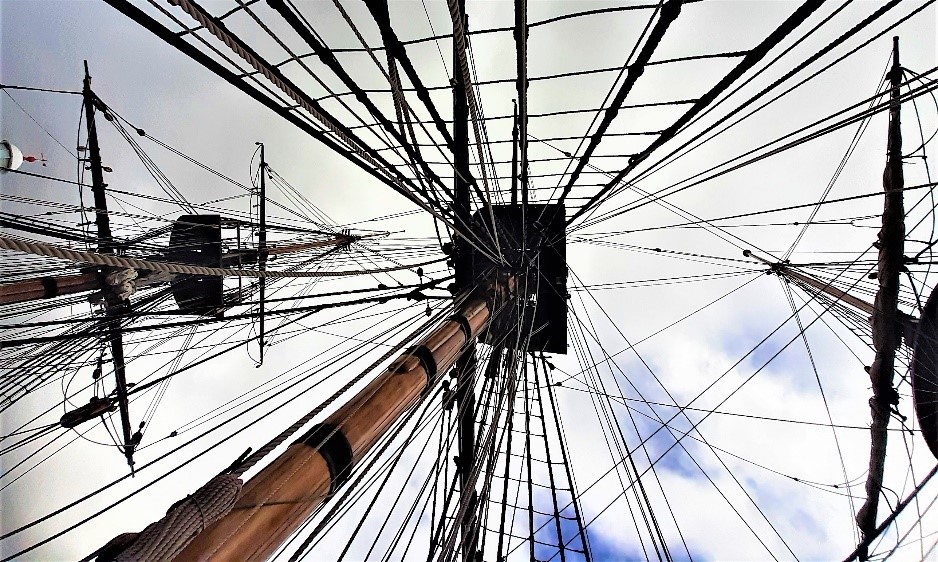 Replica tall ships, such as the Endeavour and Duyfken at the Australian National Maritime  Museum, allow us a glimpse of the central role of rope in the ages of exploration and empire. Standing on deck, ropes are everywhere, and in quite astonishing lengths - the Endeavour replica boasts 30 kilometres of line on board. The standing rigging, or lines which hold up the masts, are Manila hemp (which is actually Abaca, and not hemp), which has a long history in seafaring. They were produced for the replica in the UK on an 18th century machine, and treated locally with Stockholm tar. At dock, with sails concealed, ropes of varying diameter form a striking canopy above and around, tensed straight as rigging. In contrast, at deck level coiled ropes lay awaiting use, usually fastidiously attached, but sometimes seemingly haphazardly dropped. 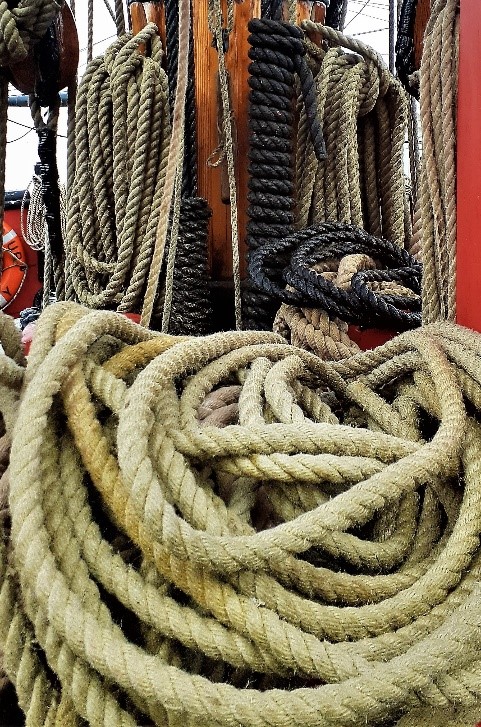 The Duyfken and Endeavour replicas are, of course, simulations of a long-gone historical seafaring experience. There are elements of fantasy - the Duyfken replica, now in Sydney after years in Western Australia, sits in a place the original never visited. There is also tragedy and controversy – the wreck of the original Endeavour was recently located off Rhode Island after two centuries of deep water slumber, and is now revealed as remnants, half-claimed by the ocean. At Sydney’s Darling Harbour, the replica Endeavour – just three decades old – is a paradoxical mix of authenticity and theatre. It is impossible to photograph the entire ship without the landscape of modernity intruding. The hum of a bustling city, even when muted on a rainy day, anchors us in the aural now. The smells that would have been prevalent on 18th century ships – food fresh and rancid, tars and paints, animals, and people in want of potable water – can barely be imagined. The signs of compromise are everywhere – the original Endeavour did not, for example, have an engine room or modern lifejackets.

Yet while the senses can never fully recreate the shipboard experience, especially at dock, many of the visuals can fuel what historian Greg Dening called the creative imagination. In the 21st century, all men do not live as Melville wrote in Moby Dick “enveloped in whale-lines… born with halters round their necks.” Yet the replicas gave this visitor a taste and a glimpse of the role of ropes as veins and sinews of the metaphorical animal which was maritime exploration and, eventually, colonisation.