This monumental tomb is the most elaborate of the better-preserved tombs in the South Tomb Group. It features a T-shaped entrance porch measuring approximately 3m x 3.65m, which fronts the structure on the north. This porch leads into what was originally a single transverse chamber (10.5m x 3.5m), but had become two rooms (designated as 1 and 2), via a poorly-preserved doorway in the centre of the common wall. A third room, Room 3, of approximately the same size is accessed through a central door in the southern wall. This doorway may have had a stone frame.

Rooms 1 and 2 are separated by a partition wall with a doorway. This wall abutts original wall plaster revealing it to be a secondary construction. Room 1 on the west is larger in dimension than Room 2 and while both have compacted earth floors, the floor of Room 2 is raised with a step indicating that it was relaid when the room was created.

In Room 3, measuring approximately 10.1m x 3.4m, a central niche features in the southern wall. Another niche appears to have once existed in the eastern wall that had a stone base and an arched top. It is also possible that it was bordered by a frame at the sides, but traces of this are poor. The floor of the room was made with mud-bricks laid obliquely from northwest to southeast, covered by a mud-plaster layer. A deposit of apparently oil-rich mud was discovered in the centre of this floor.

The external wall faces of the tomb feature two half-columns on the eastern and western sides, and two half-columns on either side of the entrance. Double half-columns were applied to the north-eastern and north-western corners, while at the south edge of the eastern and western sides there was a further half column. Papyriform capitals are supported by the columns, but it could not be determined if there was a cavetto cornice above. The roofs throughout the structure were barrel-vaulted and the walls were mud-plastered.

Internally the rooms were covered with brick collapse overlaid by sand fill to almost floor level. At floor level the remains of very disturbed interments were discovered and some exhibited evidence of burning. Room 1 contained a pile of burnt human remains, linen and broken objects. The walls and floor of Room 3 had been exposed to severe burning although the human remains and linen were not. It was clear from this evidence that the burials had been exposed to wanton destruction. In all, six adults, two juveniles and one infant were buried in the tomb.

A variety of incomplete artefacts were found associated with the human remains also. These included fragments from a gilded sandstone statue, fragments from a terracotta figurine of a female, pieces of plastered and painted wood that may have come from funerary furniture, pieces from glass and ceramic vessels; the ceramics are of types that may be ascribed to the 2nd-3rd centuries. Iron nails that were found indicate that doors similar to those in North Tombs 1 and 2 were fitted in this tomb also. 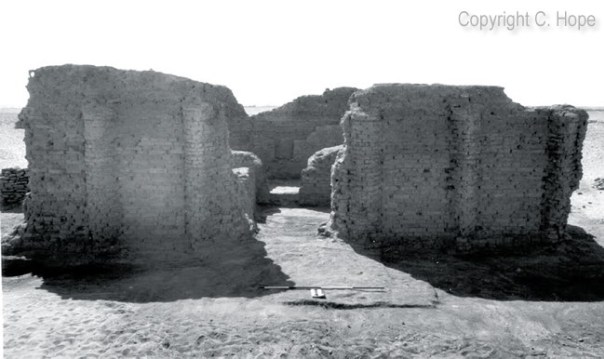 A view of the northern wall, entrance and remains of the portico of South Tomb 4 with a niche visible in the southern wall of Room 3.