“Ukraine and the World” Conference Held at Monash University "Ukraine and the World" conference participants

Major Sponsors were the Monash University Library, which contributed the venue and the time of its staff; the Embassy of Ukraine in Australia, which for the first time materially supported a Ukraine-related academic event at an Australian university; and two bodies which have a long history of supporting Ukrainian Studies projects and, in particular, Ukrainian-themed conferences at Monash: Dnister Ukrainian Credit Co-operative and the Ukrainian Studies Foundation in Australia. 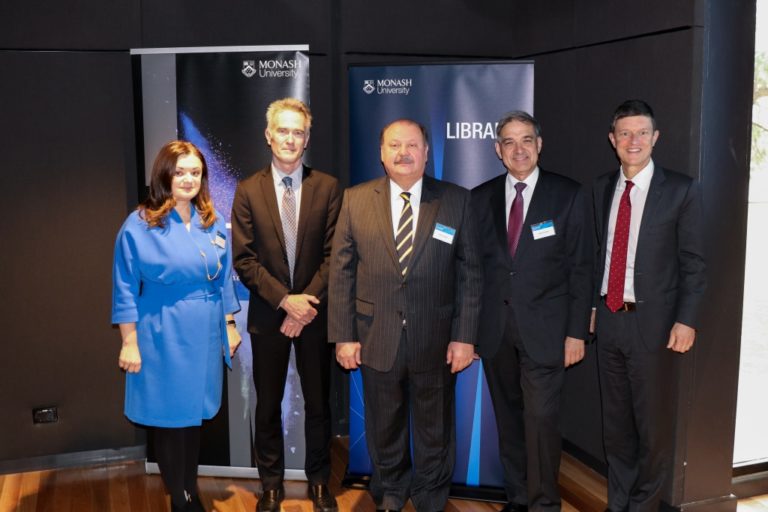 The conference’s opening session was addressed by Monash University’s Provost and Senior Vice-President Professor Marc Parlange, the University Librarian Mr Bob Gerrity and the Ambassador of Ukraine to Australia Dr Mykola Kulinich. Professor Parlange spoke of the relevance of the troubled present-day experiences of Ukraine to an understanding of the contemporary international arena. He also paid tribute to the long history – since 1983 – of co-operation between the University and Australia’s Ukrainian community in dveloping a Monash presence in Ukrainian Studies.

Mr Gerrity welcomed participants to the Library and drew attention to the magnitude of its Ukrainian Studies collection which, thanks to the Ada Booth Foundation’s support for resources in Slavic Studies, has unparalleled opportunities for further expansion.

Ambassador Kulinich underscored the significance of research concerning matters Ukrainian in countries other than Ukraine and informed the audience of the Ukrainian government’s determination to support international contributions to Ukrainian Studies.

Professor Marko Pavlyshyn welcomed participants on behalf of the Zerov Centre and the Shevchenko Scientific Society, while Professor Natalia Chaban (University of Canterbury, New Zealand) did so on behalf of the Ukrainian Studies Association of Australia and New Zealand. Two papers constituted the academic part of the opening session. Ambassador Kulinich spoke of the priorities of Ukrainian foreign policy after the Revolution of Dignity of 2013-14 and in the context of the Russo-Ukrainian war. The country’s orientation toward Europe and the West, Dr Kulinich argued, constitutes a fundamental civilisational choice, just as the war is the external sign of a profound civilisational confrontation between open and closed societies that has global significance. Dr Alexandra Siddall, Director of the Human Rights and Indigenous Issues Section of the Australian Department of Foreign Affairs and Trade, also addressed the theme of Ukraine in an international relations context, reviewing the instances of Ukraine-Australia co-operation in the Human Rights Council of the United Nations Organisation, of which both countries are currently members. Dr Siddall pointed to the fact that Australia and Ukraine were almost always in agreement on the values and principles that should prevail in the international arena.

The conference’s three keynote papers served as focal points for the three broad thematic groupings into which the program clustered the presentations: contemporary Ukraine; Ukrainian issues in historical and cultural perspective; and Ukrainians outside Ukraine and, especially, in Australia. A day of the conference was dedicated to the last of these topics and thus was designated part of the nationwide commemoration of the 70th anniversary of Ukrainian settlement in Australia. 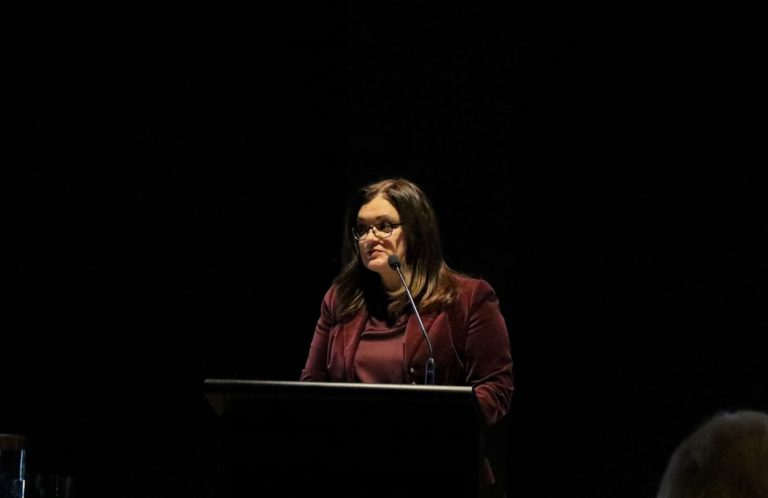 Professor Chaban’s keynote delivery concerned the evolution of perceptions by various sections of Ukrainian society of one of Ukraine’s most important partners: the EU. One of the unexpected findings of the project was that, however much the Ukraine-EU partnership is deepening, the slow pace of Ukraine’s integration into Europe has generated among the young and well educated an anxiety lest Ukraine follow the “Turkish path” toward authoritarianism. 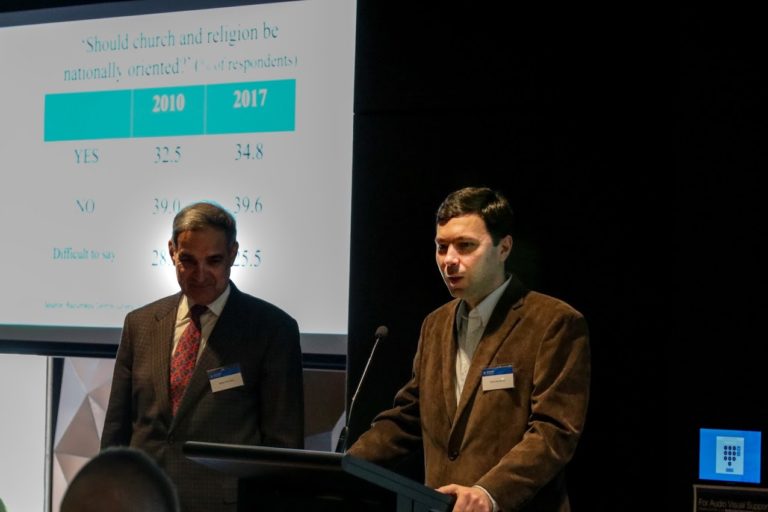 Tatiana Bonch-Osmolovskaya (University of NSW) reported on the 83rd Congress of PEN International, which took place in 2016 in Lviv and whose theme was “Reclaiming Truth in Times of Propaganda.” In keeping with the Congress themes of human rights and freedom from persecution, Dr Bonch-Osmolovskaya invited conference participants to join her in a flashmob in support of the Ukrainian filmmaker Oleh Sentsov. On the day of this demonstration Sentsov was enduring the 60th day of his hunger strike in protest against his illegal imprisonment in the Russian Federation. Practically all who were present took part in the manifestation of solidarity with the prisoner of conscience. The conference in solidarity with Oleh Sentsov 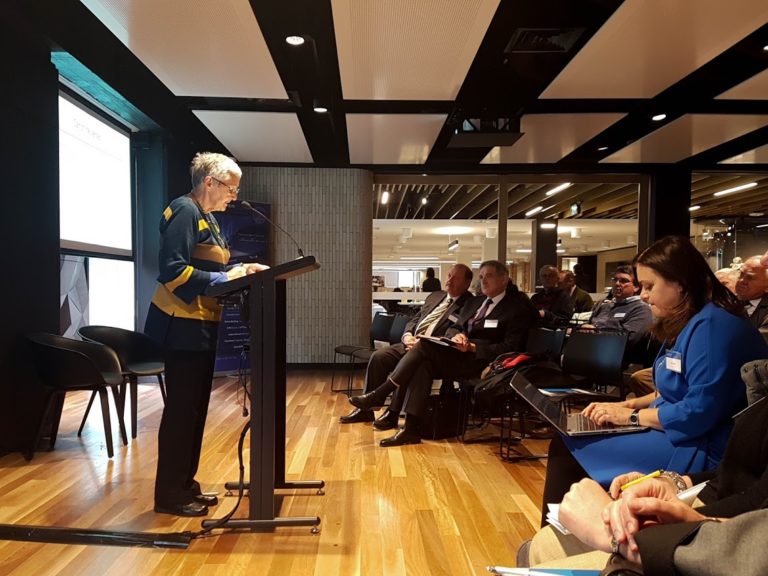 The keynote paper presented by Professor Giovanna Brogi (University of Milan, Italy) examined the phenomenon of “plurilinguism” – the use of several languages – in the cultural practice of Ukrainian seventeenth-century clerical and secular elites. In a cosmopolitan cultural environment where the choice of Polish, Latin or Ukrainian depended on the social context, an expression of loyalty to the language of his people by the poet Ivan Velychkovs’kyi (1630-1701) reads like a premonition of nineteenth-century linguistic nationalism. 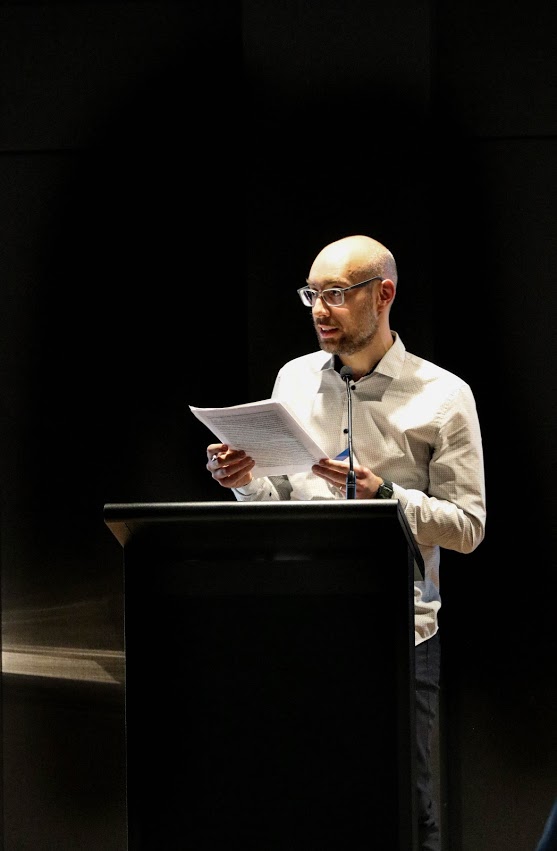 Contributions to literary and cultural history included analysis of the religious and social meanings of the visual symbolism of the title page of a book of seventeenth-century sermons (Maria Grazia Bartolini, University of Milan), consideration of the political and literary writings of the historian Mykola Kostomarov (Marko Pavlyshyn and Dmytro Yesypenko, both Monash), a survey of linguistic russification under Russian Imperial and Soviet regimes (Andriy Danylenko, Pace University, USA), interpretations of contemporary Ukrainian poetry (Alessandro Achilli, Monash) and prose (Vitaly Chernetsky, University of Kansas, USA), as well as the analysis of the image of Ukrainian literature on Instagram (Halyna Pavlyshyn, University of Tasmania). 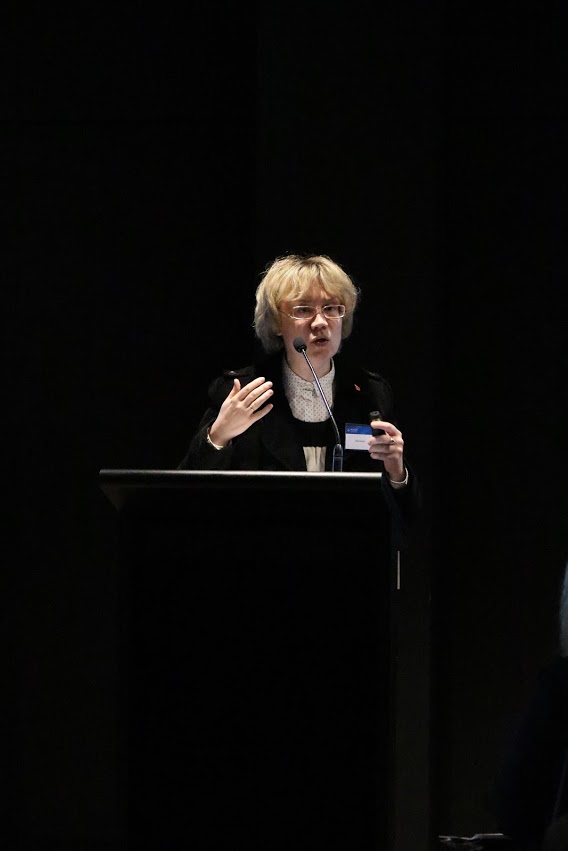 The Holodomor was the subject of two presentations, one placing it in the context of other initially silenced, but now gradually recovered memories of genocides, including the Holocaust (Iryna Starovoit, Ukrainian Catholic University), another reflecting on the representation of the Holodomor in Miron Dolot’s memoir Execution by Hunger (Elise Westin, University of Adelaide). Memory-management was a theme in an account of the role of the myth of the Soviet “garden city” in the development of Crimea after the Second World War and the deportation of the Crimean Tatars (Diana Averina-Lugova, University of Canterbury, New Zealand).

70th Anniversary of Ukrainian Settlement in Australia; Migration and Diaspora 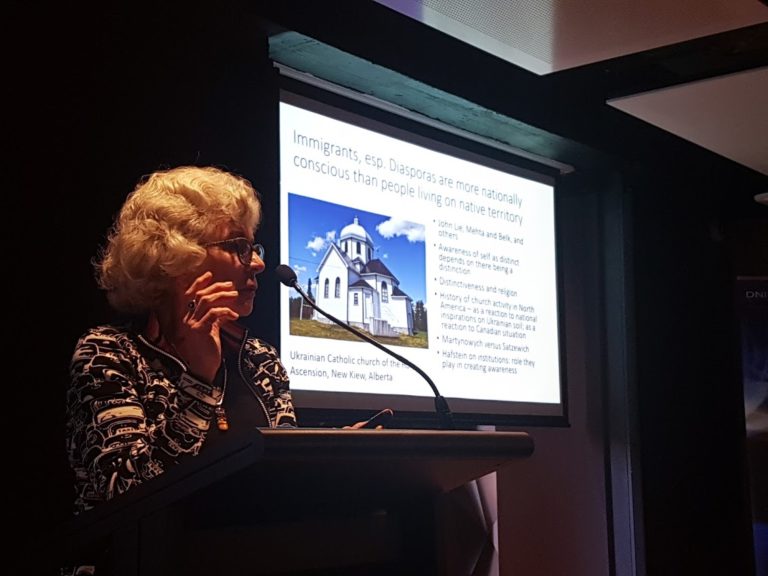 In her keynote address Professor Natalie Kononenko (University of Alberta, Canada) accompanied her presentation on the Ukrainian material culture of the Canadian prairies with poignant images of domed wooden Ukrainian churches in decay, making an urgent case for the description and preservation of such examples of diasporic cultural heritage. The theme of heritage preservation was central in a presentation on the settlement narratives of Ukrainians in Geelong (Natalie Senjov-Makohon, State Library of Victoria) and an account of a new project to organise and make accessible the archives of the Association of Ukrainians in Victoria (Iryna Ordynat).

Migration and the adaptation of migrants from Ukraine Australia were the common theme of papers on the barriers faced by skilled immigrants in Melbourne (Olha Shmihelska, Monash), on the use and non-use of Australian health services by Ukrainian immigrants (Victoria Team, Monash) and on the problems encountered by Jews from Ukraine in the process of their adjustment to Australia and the Australian Jewish community (Emmanuel Gruzman, Monash).

Svitlana Odynets (National Academy of Sciences of Ukraine) examined the social consequences in Ukraine of large-scale labour migration of women to Italy and other European countries, while Corinne Seals (Victoria University of Wellington, New Zealand) showed that after the Euromaidan revolution fluid national self-identification among migrants from Ukraine was in many instances displaced by consciously chosen and more clearly defined identities, whether Ukrainian or Russian, often with accompanying changes in language practice. 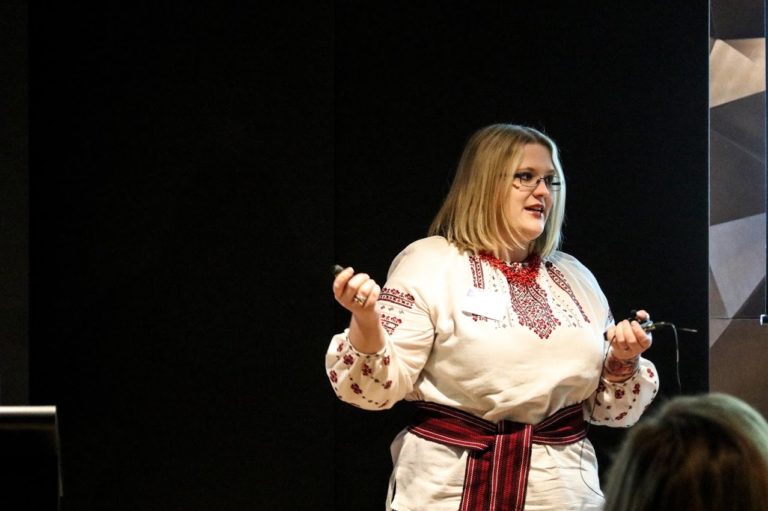 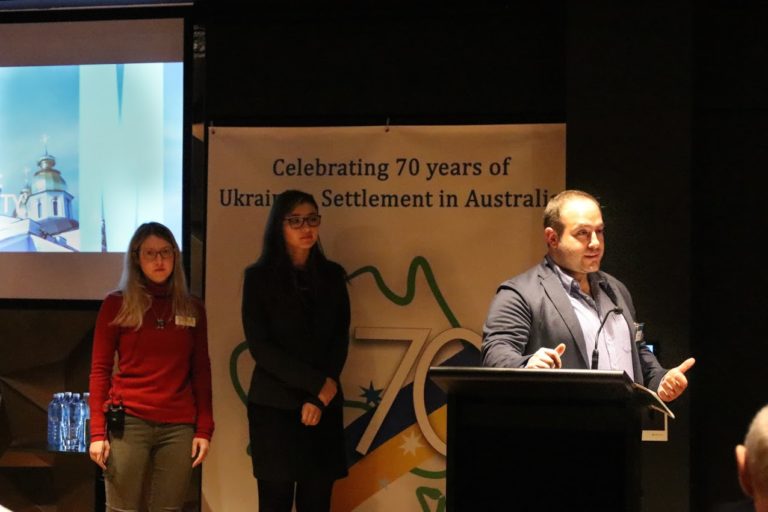 Adjacent to the conference auditorium an exhibition of rare Ukrainian publications held by the Library, including a 1665 edition of Ioanykii Galiatovs’kyi’s New Heaven, was on display, as was an exhibition of Australian-themed landscapes by the post-Second World War immigrant painter Volodymyr Sawchak (1911-2007). The book exhibition was opened and introduced by the Ada Booth Librarian of Slavic Studies Anna Rubinowski.

The conference provided a context for the launch of a book of scholarly articles, Ukraine and Europe: Cultural Encounters and Negotiations, edited by Giovanna Brogi Bercoff, Marko Pavlyshyn and Serhii Plokhy (University of Toronto Press, 2017). The collection was launched by Professor Vitaly Chernetsky. Two of the editors, Professors Brogi and Pavlyshyn, offered their remarks in person, while the third, Professor Serhii Plokhy (Harvard University) sent greetings that were read by the master of ceremonies, Dr Alessandro Achilli. 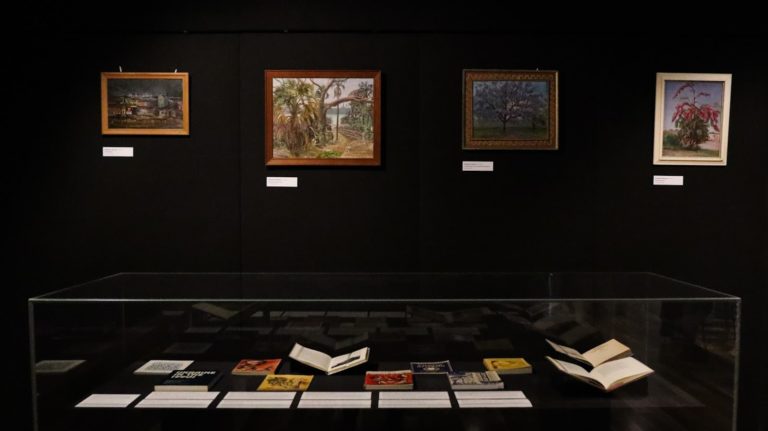 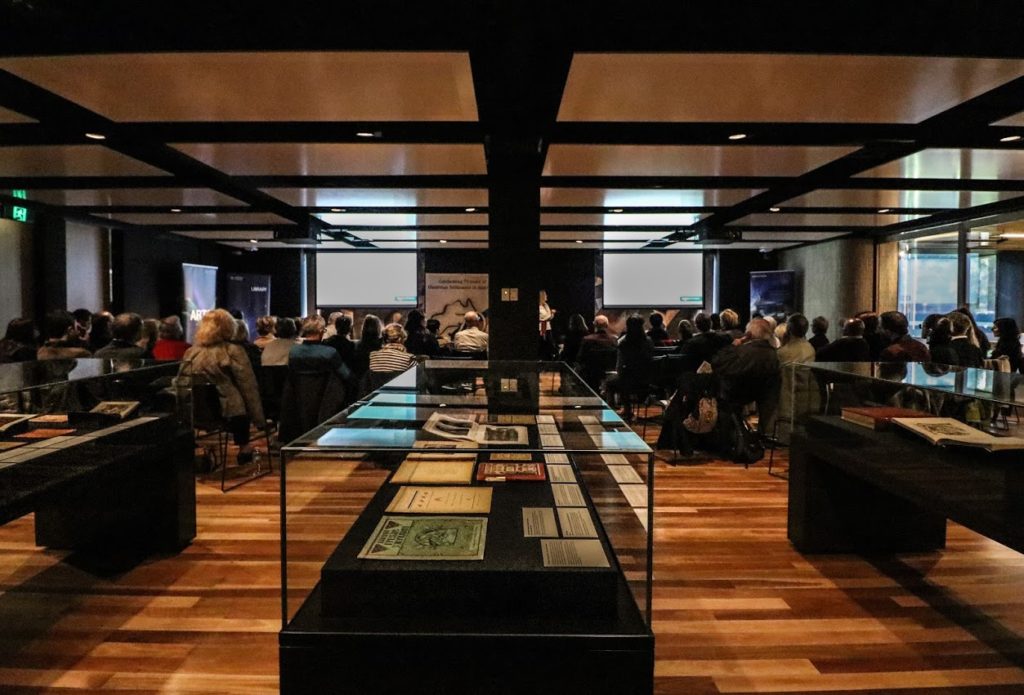