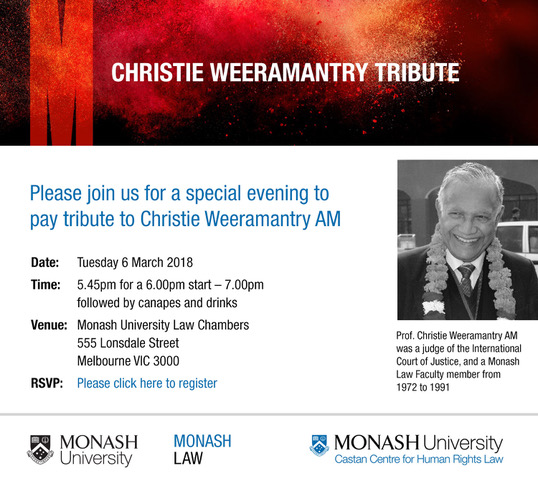 `Towards One World’: the Vision of C.G.Weeramantry

After Christie Weeramantry’s death in early 2017, the many Monash Law Faculty staff who had been mentored by Christie began preparations for an event to mark his remarkable life.

Born in Sri Lanka, Christie had moved to Australia to take up a position at Monash in the early 1970s where he quickly developed a reputation as a world-renowned international law scholar with special interest in environmental protection, the abolition of nuclear weapons, the promotion of peace and the study of religion and the law.

Christie’s expertise was recognised when he was appointed to the International Court of Justice in 1991. He left his mark in many areas, but none more than his dissent in the nuclear weapons advisory opinion, where he stated that “the use or threat of use of nuclear weapons is illegal in any circumstances whatsoever.”

On 6 March 2018, another world-renowned international scholar, Professor Tony Anghie, spoke at a special event to honour Christie’s life. A former student and research assistant of Christie’s who now teaches at the University of Utah and the National University of Singapore, Tony flew to Australia for the event.

Tony examined Christie’s jurisprudence from his time as a lawyer and Judge in Sri Lanka, through to his work on the International Court of Justice, focussing particularly on environmental protection and nuclear weapons and exploring how Christie sought to create a truly universal international law, one that embodied all the civilizations of the world rather than focusing only on Western legal systems and principles.

The environmental dispute between Hungary and Slovakia, heard in the International Court of Justice, was one of the first major cases to deal with international environmental law. Focussing on the building of a dam, Tony posed the question “Can we balance the competing demands of development and environmental protection?”. It was a question that Christie answered in the affirmative.

On the one hand, as a society we propel toward economic growth, however, this can often come at the cost of considerable environmental consequences. In this case, Christie used a pioneering approach to argue that the concept of sustainable development formed part of customary international law. He argued that customary international law needed to be expanded to include the practices of peoples in Asia, Africa and the Pacific. He said that law needed to be created by those people who will be subject to it if it is to treated as legitimate. Thus he examined the practices and customs of societies in Asia, Africa and Latin America and, uniquely,  Christie looked at Aboriginal custom, and contended that organic entities and communities, such as the Aboriginal community, should be seen as makers of international law. He took an innovative approach to customary law, demonstrating a preference for a “bottom up” approach, that is, that societies are themselves the source of international law, instead of the state. Christie’s decision in this case encapsulated his view of a universal international law, incorporating non-Western traditions.

Christie’s role in the nuclear weapons case arose when he was Vice President of the ICJ. The court was asked for an advisory opinion on whether the use or threat of use of nuclear weapons in any circumstance is permitted under international law.

The bench split evenly in the highly controversial case, with the President casting the deciding vote, ruling that nuclear weapons could be used consistently with international law in some circumstances.

Much of the court’s deliberation surrounded the issue of self-defence. Self-defence was argued to be an inherent and fundamental right and one that could be exercised in a manner compatible with international humanitarian laws and other such principles. Thus various members of the court were of the view that the use or threat of use of nuclear weapons is acceptable in certain circumstances of self-defence.

Christie made a critical 127-page dissent, examining key issues of human rights and international law. He held that even in the instance of self-defence, the rules of international humanitarian law must still apply. It is a breach of international humanitarian law for a state to use weapons that are incapable of distinguishing between civilians and combatants. Christie held that the law is never absent, and that all actions must be governed by law, even in circumstances of self-defence. He asserted that the use of nuclear weapons is illegal in all circumstances, and in so doing drew once again on various historical traditions, including the writing in ancient Indian texts, and natural law traditions. Christie’s powerful dissent appears all the more timely and prophetic as nuclear tensions escalate and attempts are made to expand the concept of self-defence to allow what some label pre-emptive self-defence.

During the evening, Tony spoke passionately about Christie’s life in the law, and his role as a teacher, mentor and friend. He is missed by so many who knew him at Monash, both before his role on the ICJ and afterwards, when he returned to the Faculty as an Emeritus Professor until his death.

Tony Anghie is Professor of Law at the University of Utah  and the National University of Singapore. He was a student and then a research assistant to Christie Weeramantry, and a friend for many years. He received his B.A and LL.B degrees from Monash University and his S.J.D from Harvard Law School where he was appointed a Senior Fellow. His scholarship focuses on public international law, human rights, international economic law, the history and theory of international law, and Third World Approaches to International Law.

About Christie Weeramantry AM
Christopher Gregory Weeramantry (17 November 1926 – 5 January 2017) was a Judge of the International Court of Justice from 1991 to 2000, serving as its Vice-President from 1997 to 2000. Prior to his position at the ICJ, he served as a Judge of the Supreme Court of Sri Lanka from 1967 to 1971, and was then appointed the Sir Hayden Starke Professor of Law at Monash University. After his appointment to the ICJ, Christie remained an Emeritus Professor at Monash , where he had a profound effect on his colleagues as a mentor and friend.

His special interests included protection of the environment, the abolition of nuclear weapons, the promotion of peace and the study of religion and the law. After his time on the ICJ, he established the Weeramantry International Centre for Peace Education and Research in Sri Lanka. Among his many awards, Christie received Sri Lanka's highest national honour, the Sri Lankabhimanya Award, and he was inducted as a Member of the Order of Australia.