An artist amongst us

NAIDOC Week is dedicated to celebrating the history, culture and achievements of Aboriginal and Torres Strait Islander peoples. At the William Cooper Institute, we aim to celebrate and elevate the voices of Indigenous activists, who carry on a  legacy of truth-telling and empowerment.

This year, we’re hosting a virtual discussion panel, which will explore examples of modern day activism, and look at how a new generation is enacting social change. 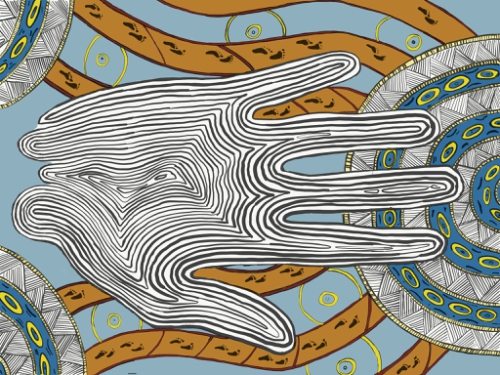 Director of the William Cooper Institute, Jamil Tye, was inspired to create a piece of art to commemorate NAIDOC Week 2020.

Read our Q&A with Jamil below:

Tell us about this piece and what it represents?

The artwork represents the origins of NAIDOC. The two patterns below the palm are to symbolise the Australian Aborigines Progressive Association - of which my great-great grandfather Shadrach Livingstone James was a founding member and honorary Secretary for 28 years - and the Aboriginal Advancement League, which began boycotting January 26 as a day of celebration even before the Day of Mourning in 1938.

I called the piece “Lead the way” because our Elders led the way with their activism, and the future generations continue to do the same. We recently made the decision to focus on the history of activism as part of the NAIDOC Week panel discussion, and while reflecting on this, I felt inspired to create something for our event.

Do the details and colours of the artwork have symbolic significance? If so, what do they represent?

Many today do not know the origins, but they are incredibly important to understand, and to appreciate the determination, work and advocacy of our Elders in years gone past. The paths leading from the two semi-circles from the base of the hand, to the large circle at the fingertips, symbolise the journey of NAIDOC - from a Day of Mourning, to a week of celebration.

The footprints are those walking along that journey, and the paths that join more closely to the larger circle represent more generations that have recently walked the path.

The hand central to the piece, is to link our Elders and early activists to the current generation who have taken up the mantle of activism, and continue to raise the profile of NAIDOC.

The brown in the path represents connection to Country, and the yellow circles in the blue rings represent many Aboriginal and Torres Strait Islander communities coming together as one, to celebrate our collective cultures during NAIDOC Week which is represented by the larger circle.

What place does art have in your life?

Unfortunately, I rarely have time for art anymore. When I was younger, I spent hours on it, but the last time I painted was for my son Leo, when he was born.

I do enjoy creating, and reflecting on art - many of my family members are very much involved in art. I remember going to a Lin Onus exhibition when I was young and being totally captivated by it. I would have to say that his work is among my favourite.

What do you hope the Monash community will gain from our NAIDOC Week panel discussion?

I hope that the Monash community learns about the origins of NAIDOC Week, and why it is so important to us as Aboriginal and Torres Strait Islander people.

For me, being a Yorta Yorta man, my people's work in the origins of the week, adds an additional layer of pride. Uncle William Cooper, after whom the Institute is named, was very much involved, likewise Aunty Geraldine Briggs whom our Monash Residential Services hall is named after - although there were of course many others.

We have a highly esteemed panel, with Yorta Yorta Elders Aunty Zeta Briggs-Thomson and Uncle Bobby Nicholls (nephew of Sir Douglas Nicholls after whom the AFL’s Indigenous round is named, and who played for the Lions and was Governor of South Australia) and my good friend Caroline Kell who is an Executive Director at VACCHO.