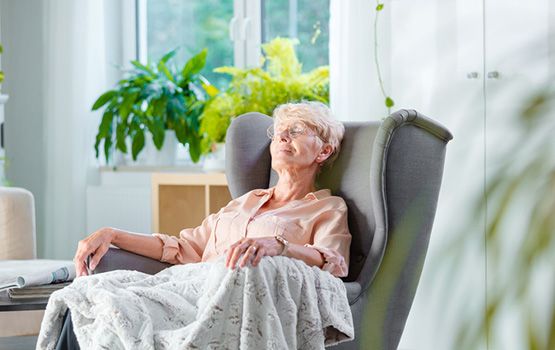 A Monash research project that will explore the role of sleep in the development of Alzheimer’s disease using acoustic sleep technology was awarded a Faye Williams Innovation Grant from the Dementia Australia Research Foundation of $375,000.

In an Australian first, Associate Professor Clare Anderson and her team at Monash University’s Turner Institute for Brain and Mental Health will use cutting-edge acoustic stimulation technology to stimulate slow-wave sleep in participants alongside state-of-the-art blood collection techniques during sleep. This will determine the role of sleep in the potential development of Alzheimer’s Disease, as well as understanding which individuals would best benefit from a sleep intervention.

This study has the potential to reveal a novel target for reducing Alzheimer’s Disease risk.

“Slow-wave sleep, which is a deep state of sleep, is thought to be very important for memory consolidation, as well as clearing out toxins in the brain that are associated with cognitive decline,” Associate Professor Anderson said.

“Our facility enables us to take blood samples from participants without interrupting their sleep so we will be able to measure how much toxin is cleared from the brain during slow-wave sleep, and importantly how much this is enhanced when slow-wave sleep is boosted using acoustic technology.

“We hope this study will inform future interventions for sleep and cognitive health that reduce the risk of developing Alzheimer’s disease including public health messaging promoting the importance of sleep as we age and the development of slow-wave enhancement sleep therapeutics.”

Dementia is a debilitating disease affecting cognition, behaviour and everyday function. Alzheimer’s Disease is the most common form of dementia affecting 330,400 Australians, with future growth predicted. With no cure, identifying modifiable targets for improving brain and cognitive health is critical, and sleep is a novel candidate for intervention.

Slow-wave sleep, the deepest form of sleep, protects the brain and is critical for cognition. It declines significantly with age, particularly in those at risk of, or with Alzheimer's Disease.

Researchers have developed precision methodologies that will allow them to influence changes in slow-wave sleep, monitored night-to-night using a non-invasive sound-based system alongside a state-of-the-art blood collection technique during sleep that will be combined with novel blood markers reflecting brain health enabling them to better understand the causal role of slow-wave sleep in the pathology of Alzheimer’s Disease.

The Chair of the Dementia Australia Research Foundation, Professor Graeme Samuel AC, said the grants provided a valuable opportunity for researchers to test novel ideas and new interventions in the field of dementia.

“The Innovation Grants provide vital insights into reducing dementia risk and establishing treatment options for people who live with, or are at risk of developing dementia,” he said.

“Without a medical breakthrough, the number of people living with dementia is expected to increase to almost 1.1 million by 2058. Innovation in dementia research is now more urgent than ever.”