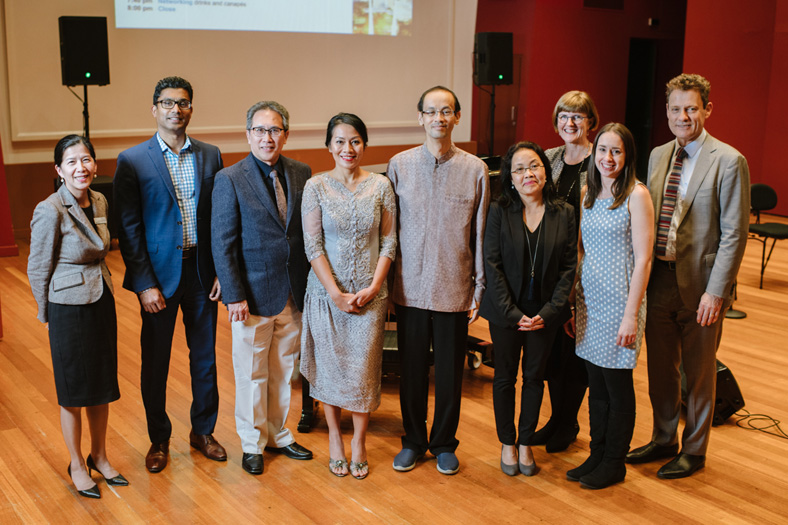 The Herb Feith Dialogue series provides a public forum to exchange ideas and views on contemporary topics of special interest and current affairs in Indonesia. It is open to all, particularly those in Australia and Indonesia.

Short excerpts of the exchange will be available in high quality video. The Centre is grateful to Monash Indonesia Representative Office (MIRO) for their generous support for the event and video production.

Indonesia is undergoing a revolution in the indigenous food industry. The passion, dedication and perseverance of smallholder farmers and indigenous communities have, against all odds, maintained a food biodiversity heritage. Moreover, these groups have also drawn on indigenous wisdom and spiritualism on sustainable food systems to enter the modern market. Inspired by these efforts, Helianti Hilman established Javara. Javara has the mission of delivering food biodiversity to the wider market and mobilizing market participation through sustainable consumption.

In our second Herb Feith Dialogue for 2021 we were honoured to have Helianti share her insights and experience on sustainable food systems. Helianti addressed various opportunities and challenges that confront sustainable food systems, particularly as we face a post-Covid world. Through her remarks, followed by questions from our moderator and the audience, insight was given to this important industry.

We truly embraced the ever evolving digital world with our first hybrid event. It was a delight to be able to host a few guests in person, while over a hundred others joined us online from all over the world. A stimulating question and answer session followed, including comments by outgoing Consul General of Indonesia (Victoria & Tasmania) Ibu Spica Tutuhatunewa.

Indonesian women have taken a leading role in a wide range of fields and across time. While the achievements deserve celebrations, like their sisters elsewhere, Indonesian women continue to face serious challenges from time to time and from region to region. So many critical debates about the nation have not been separated from debates about women, including their roles as wife and mother, their civil rights as women, their economic contribution to the family and the nation, their moral codes and conducts, and their martial responsibilities.

Our third Herb Feith Dialogue, and the first to be held in Indonesia, featuring H.E. Dr Sri Mulyani Indrawati, Minister of Finance, Republic of Indonesia, sharing her insightful perspective on ‘Women in Leadership’ (18/11/2019, Jakarta). The formalities of the evening began with welcome speeches from Professor Margaret Gardner (Vice-Chancellor & President of Monash University) and HE Gary Quinland (Australian Ambassador to Indonesia). Professor Ariel Heryanto (Director of the Herb Feith Centre) was the Master of Ceremony and Professor Sharon Pickering (Dean of Arts) was the moderator.

Indonesia is frequently publicised as the success story of Islamic democracy in the contemporary world. The participation of ordinary Indonesians in electoral democracy is massive and substantive; they currently vote for their governments in local, provincial and national levels. Elections are open, generally peaceful and orderly. Islamic political actors are heavily involved in this process. Other commentators, however, point to developments that do not support such a positive assessment. Electoral democracy has enabled a rise in identity politics. Politicised representations of religion and identity have exacerbated existing fault-lines within Indonesian society, leading some Indonesians to query whether Indonesian traditions of tolerance and equality will continue to have authority.

In our second Herb Feith Dialogue series, 22 August 2019, Professor Salim shares his insights on the issues. Professor Salim is the head of the Indonesian Ministry of Religious Affairs’ Directorate for Higher Islamic Education (DIKTIS).

The Herb Feith Dialogue series was launched on 13 June 2019, featuring award winning author-singer-songwriter Dewi (Dee) Lestari. Dee opened the evening by reflecting on her experience and insights on operating in the ecosystem of contemporary Indonesia's creative industry, where neo-liberal sentiments
encounter an unprecedented level of religious piety and anxiety. Dee was listed by Globe Asia magazine as one of the 100 Most Influential Women in Asia and was included in Richtopia’s list of 250 World’s Most Influential Women. Dee is a two-time recipient of Indonesia’s Book of The Year Award, and also
a two-time recipient of Indonesia Reader’s Choice Award for The Most Favorite Author and The Most Favourite Book.

Extending the exchange on that evening, in our first The Herb Feith Dialogue video, we invited Monash University researchers to share their views on the topic.