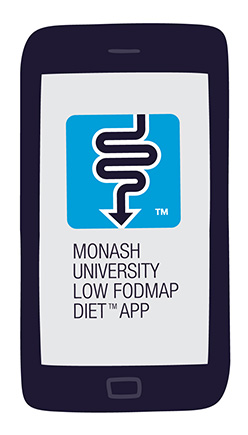 One in seven adults suffers from irritable bowel syndrome (IBS), a debilitating condition characterised by recurring symptoms of lower abdominal pain and discomfort, bloating and altered bowel habits (ranging from diarrhoea to constipation).

The app was launched in 2012 in response to an increasing number of requests about the FODMAP content of foods and is available on both iPhone and Android. It has been downloaded in over 100 countries worldwide and has reached number 1 in the medical category in over 50 countries. It is listed in the American College of Gastroenterology Clinical Practice Guidelines for the treatment of IBS.

Foods are listed using a traffic light system according to serving sizes, helping take the guess work out of how much food can be safely consumed. The app also contains other information about IBS as well as recipes and meal ideas. Monash provides Low FODMAP certification of food, products, recipes and online training.

The concept of FODMAPs was developed through research at Monash University, led by Professor Peter Gibson and Dr Jane Muir. The team now has a comprehensive database of FODMAP content in food that has been generated out of their laboratory.