Linting is a problem which has always concerned the papermaking and printing industry.  In the offset printing process, loose fibres and fines from the uncoated paper adhere to the blanket and disrupt the transfer of ink.  This reduces the print quality and is a major effect on the pressroom efficiency.

Linting is complex because it is a dynamic process that is influenced by both the printing press and paper variables.  The lint particles continuously move on and off the blanket, either transferring back to the paper or to the printing plate or into the ink and water systems – making it difficult to measure lint reproducibly. This is why the lint measured after any printing trial from the blanket is only part of the lint that has been removed from the surface of the paper.

Our research has been investigating the dynamics of lint migration during offset printing to measure the rate of lint transfer and to gain understanding how it relates to the paper properties and printing press variables.  This work was done using a high speed video camera combined with image analysis techniques.  Figure 1 below shows the captured image of lint build-up during a press run, while Figure 2 shows threshold results from dynamic and static images after performing image analysis. 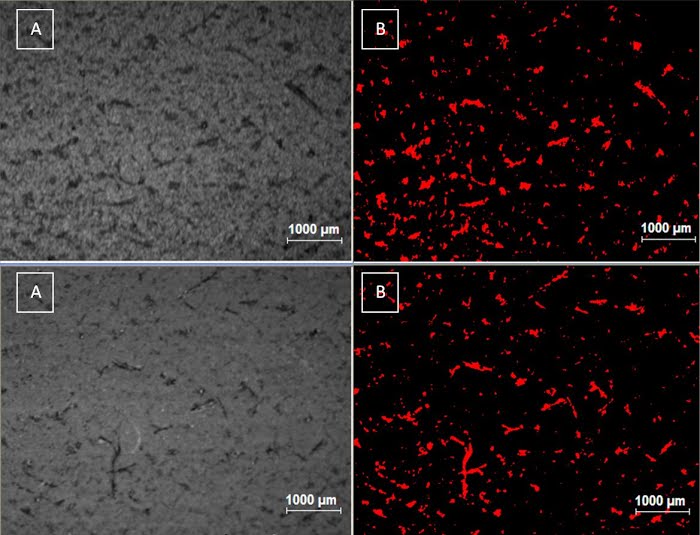 Figure 2. Dynamic (top row) and static (bottom row) images of 45gsm newsprint after printing 7000 copies at tack 12.5 acquired by the lint camera. (A) Raw image of an analysed area; (B) Image after applying manual threshold to the dynamic and static images in (A). Note: static images were taken at the end of run, after the press is halted.

This research has been supported by the Australian Research Council through Linkage grants, Monash University and Norske Skog, which is the only Australian manufacturer of newsprint and related grades.