Zeolites are hydrated microporous, silica-oxygen-alumina tetrahedral structures with varying applications in many fields. Zeolites can be naturally occurring or synthesized. Natural zeolites offer only a limited range of atomic structures and properties which prevents large scale use due to stringent product specifications. Synthetic zeolites, on the other hand offer a wide range of properties but have higher cost. Synthetic zeolites have high end applications in the industry such as desiccants, adsorbents, molecular sieves, ion exchangers, catalysts and detergent builders while natural zeolites can be advantageously used for bulk applications due to low cost.

The empirical representation of aluminosilicate zeolites is

where M is the charge compensating cation with valency n. These cations belong to the family of alkali and alkaline earth elements. The ratio x/y can have a value of 1 to infinity and z represents the number of water molecules that can be adsorbed or desorbed in the pores. The bears a net negative charge which is balanced by an extra-framework univalent cation. The cations and the water molecules occupy the many intracrystalline channels and the interconnected voids present in the framework. These molecules have considerable mobility. Ion exchange thus becomes easy for the cations and the water molecules can be removed reversibly with the application of heat. The host structure has many micropores and voids which account for almost 50% of the crystal volume. The zeolite framework is a little flexible as the size and shape of the pore can change corresponding with the particular guest species present in the pore. Figure 1 shows the framework of zeolite Y. The use of papermaking techniques to create structured adsorbents is an important new area of zeolite application. Current adsorbent structures such as beads and pellets have high mass transfer resistance and pressure drop while pre-formed monolith structures have a high cost associated with their preparation and low adsorbent loading present in the structure. Papermaking is a highly developed field, the methods of which may be used in creating thin, high density adsorbent sheets that will improve mass transfer and have a reduced pressure drop. The preparation of zeolite filled sheets is made much easier as they already play a role in the paper industry as fillers and retention aids in areas where natural zeolite is available in abundance. SEM of a zeolite laminate structure is shown in Figure 2. 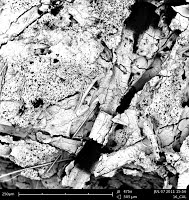