Absorption and integration – welfare in the 1950s

1950 was an expansive year for Leo and Mina Fink. Leo was President of the Australian Jewish Welfare and Relief Society (AJWRS) and Vice President of the Federation of Australian Jewish Welfare Societies. Mina was a director and an executive member of AJWRS. Leo also continued his commitment to the Melbourne family business. He was Joint Managing Director of United Woollen Mills Pty Ltd, manufacturers of blankets, woollen and worsted materials, in South Melbourne and United Carpet Mills Pty Ltd, manufacturers of Wilton, Axminster and broadloom carpets, in Preston.

On the 7 February 1950, Leo and Mina attended a Sydney conference to discuss absorption of the expected 4000 immigrants by the Federation and the anticipated grant from the Joint in America, Hebrew Immigration Aid Society (HIAS) and Refugee Economic Corporation. The Federation had asked for £200,000, but was granted £120,000, as £80,000 had already been received from aid agencies. They pushed to get the entire amount. Leo, Mina and their daughter Freda left for a nine-month tour of Europe and Israel on 1 March 1950. They travelled on the SS Himalaya, arriving in London on 30 March 1950. They were guests of HIAS and the Joint, visiting refugee camps, health institutions, children’s homes, and Jewish educational and vocational institutions.

At the AJWRS Annual General Meeting (AGM) on 27 November 1950, Leo and Mina tallied the highest number of votes in board elections, in spite of their absence for most of the year. The minutes recorded: ‘During the past year over 3000 Jewish immigrants arrived in Australia. (1949 = 3800) Out of those nearly 2000 settled in Victoria… All this requires large funds…at the Frances Barkman House [formerly the Larino Home], about 30 children are maintained requiring food, clothing, education, etc… The monies received from overseas were for capital use only, and with this money hostels were purchased… The AJWRS had at the time of the meeting seven houses. More were needed… At the end of October, there were in Europe 3800 permit holders, nearly all will need to be helped with transport costs and housing.’

Mina advised the AJWRS Board on 10 April 1951 that goods sent to Oeuvre de Secours aux Enfants (Children’s Aid Society) France had been redirected to Israel, as need there was greater. She reported that the Frances Barkman House (FBH) was accommodating 27 children, but stressed the need for additional housing for younger children to support parents in temporary hardship. A visit to FBH was organised for board members to inspect the premises.

By mid-June 1951, Mina had suggested that a crèche at FBH be established where children could be left during the day, enabling both parents to work. She felt ‘happy to see arrangements enabling the admission of younger children of the age group two to five.’

In the AJWRS minutes of 11 July 1951, Leo engaged with international matters concerning the treatment of Hungarian Jews and lodged a protest with the United Nations through Canberra. In August, Leo had a personal meeting with Tasman Heyes, Secretary of the Department of Immigration. Heyes subsequently promised to ‘speed up all applications for permits concerning nominees in Hungary, and also Hungarian nominees in other European countries’.

In August 1951, Mina noted the number of ‘sick children’ at FBH who would benefit from a ‘trained welfare worker’. The need to professionalise social work was well understood by Mina. By November 1951, Mina had joined a Special Committee to investigate the urgent need for a home for small children.

The AJWRS AGM on 3 December 1951 noted that 4000 permit holders were still in Europe and that the main problem remained accommodation on arrival. Landsmanshaftn helped with housing. Employment for unskilled workers proved difficult, particularly with the downturn in the economy. The need for more accommodation for young children was stressed. FBH was stretched to the limit, with alterations and reorganisation urgently needed.

At the AJWRS elections on 11 December 1951, Leo was unanimously re-elected President. Mina was elected Deputy Delegate to the Victorian Jewish Board of Deputies (VJBD) and President of the Ladies’ Group.

The 1952 AJWRS AGM noted that the ‘centre of gravity had shifted from immigration to rehabilitation… The contentious question “Are you Jewish?” was deleted from application forms for landing permits.’

In a letter to Lewis Neikrug at HIAS Paris on 2 December 1952, Leo reiterated his aim that all immigrants become self-sufficient: ‘Our task has become one of consolidation and absorption with the view of making every new settler a self-supporting and happy citizen.’

Ben Touster, President of HIAS New York, wrote to Leo on 23 June 1953, thanking him for dedicating the ‘main shelter to the inspiring memory of our late leader John L Bernstein…as a token of the ties keeping us together in our worldwide activities for the cause of the Jewish migrant.’

In 1953, Leo received the Coronation Medal from Buckingham Palace. 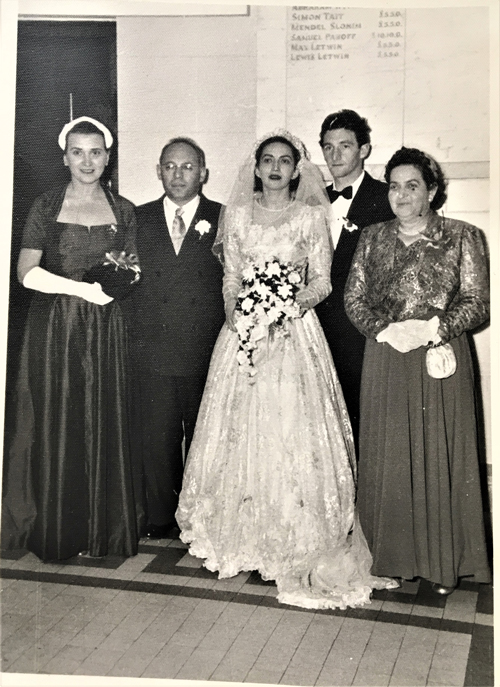 At the wedding of Sam Susskind, one of the Buchenwald group. Leo and Mina were 'unterfirers' representing Sam's late parents.

The AJWRS AGM emphasised the need for continued overseas financial assistance: ‘Activities of the society have shifted from mass immigration to rehabilitation and integration of newcomers to this country… The necessity for assisting needy Jewish residents in Melbourne became more acute, and the Society did its best to help everyone who came for help. This was only possible through the financial assistance of the American Joint Distribution Committee.’

From 1950 to 1960, Leo was Chairman of the Migration Standing Committee for the Executive Council of Australian Jewry (ECAJ). In 1954 and 1955, he served as Vice President of the VJBD.

At the 1955 AJWRS AGM, Leo shared his global vision to associate with the Jewish World Migration Council in New York, establishing an International Committee which would enable large-scale future immigration.

The 1955/56 AJWRS AGM report noted that ‘the days of mass migration have ended.’ It detailed the extent of its operations: ‘Assistance and rehabilitation of Jewish victims of Nazi persecution is still our main function… The office received nearly 5000 letters and sent out 8500 communications and more than 8000 persons came to us during the past 12 months.’

In 1956, Leo was both Acting President and Acting Treasurer of ECAJ.

On 17 December 1956, the AJWRS AGM reported that ‘events during the last few weeks in Hungary and Egypt will again bring our Society to the rescue of many thousands who have become homeless. More than ten thousand Hungarian refugees in Austria, of which a large percentage are Jewish, are looking to Australia for immigration and our Society will do everything in their power to bring as many as possible to our shores. Many thousand Egyptian refugees in Italy, Greece and France will also be assisted in their migration to Australia. Mr Fink also foresaw the possibility of large-scale immigration from Poland and other Eastern European countries.’

By the middle of June 1957, Mina had increased her involvement in the National Council of Jewish Women (NCJW), but still focussed on assisting new immigrants. That month’s NCJW Bulletin reported: ‘Mrs L Fink, Convenor of this [Welfare] Section and her co-workers are doing a grand job in coping with the needs of a steady stream of Hungarian refugees and their families.’

The August-September 1957 NCJW Bulletin announced Mina as the newly elected Victorian President, a delegate to the United Nations Organisation and Convenor of the Welfare Group.

The AJWRS AGM meeting of 17 February 1958 confirmed the rising number of new immigrants: ‘The Jewish community of Australia has risen by seven per cent during the past year, owing to the immigration of several thousand refugees from Hungary, Egypt and Poland… 1958 would bring a further influx of migrants mainly from Eastern European countries.’

In February 1958, the NCJW presented an overview of its activities at a conference in Sydney: ‘Growth and expansion in membership and projects; for the first time projects are being specifically promoted in the name of the NCJW in Israel; local welfare work continues with Hungarian refugees; local work with non-Jewish organisations includes Meals on Wheels.’ In May of that year, the NCJW Bulletin reported that Mina was ‘honoured by invitation to attend the Women’s Morning Tea to the Queen Mother during her Melbourne visit.’ For Mina, this type of recognition acknowledged her effort and achievement.

In Mina’s first Annual Report for the NCJW in May 1958, she declared ‘United we stand – Divided we fall’. It was a mantra that emphasised teamwork, a feature of her leadership style.

At the August-September 1958 NCJW AGM, Mina was re-elected President. She engaged new interests and a younger generation, forming three new groups: the Romanian Group, the Council Younger Set and the Freelancers Group.

In 1958, Leo and Mina went to Japan, visiting Nara and Tokyo.

The 1958/59 AJWRS AGM report revealed the continuing expansive outreach of the welfare organisation: ‘The total Jewish migrants for Australia was 1466 of which Victoria received 868…the majority of migrants to Victoria came from Poland, and of the 580 Polish migrants who arrived in Australia, 450 settled in Victoria… The number of migrants from Israel was surprisingly large and out of 424 who arrived in Australia, 277 settled in Victoria. Although the Welfare Society was not instrumental in obtaining permits or arranging transportation for Israeli migrants, it was frequently called upon for assistance in the various fields of social services… About 12,000 people have called on us in matters of migration, transportation, loans, sustenance, as well as for general advice. Outgoing correspondence exceeded 10,000 mail pieces, not including 11,000 circular letters which were distributed during the year and incoming letters from overseas and within Australia were over 7,000.’

A meeting was called on 1 October 1958 between AJWRS, NCJW and B’nai B’rith to establish a Sheltered Workshop in Melbourne. This involved Mina as President of NCJW, Leo as President of AJWRS, and Kurt Lippmann as B’nai B’rith representative. The Sheltered Workshop opened in December 1958 in two rooms in the AJWRS building on Punt Road in South Yarra.

In 1959, Leo was a delegate representing Australian Jewry at the World Jewish Congress Assembly in Stockholm, Sweden. He stopped over in Israel on his return and explored the idea of an Australian enterprise.

In 1959, Leo received the United HIAS Service Award of Honour, with this citation: ‘In recognition of his significant contributions to the field of Jewish migration and resettlement and to the general community welfare. His spirit of humanitarian concern for his fellow man prompted his colleagues who have worked by his side to adjudge him to be the leader in his community worthy of this Award which carries with it the profound gratitude of United HIAS Service, and the countless human beings the agency has rescued and helped to find security and opportunity in countries of haven.’