In their own words: ‘We must continue to develop the work in every possible direction and be prepared for the many tasks that await us. When the guns cease firing…when the war will finally come to its victorious conclusion – and we know that this day is not far off – the Jewish battle for bringing our brethren back to health and normal life will just begin. When Europe is finally freed, the remnants of European Jewry will present a ghastly picture of havoc and utter misery. They can be helped only by a concerted and sustained effort of their fellow Jews in the free countries. In this global effort of world Jewry, we Jews in Australia will have to play a part that far outweighs our numerical strength.’ – Leo Fink, United Jewish Overseas Relief Fund 1943-44 Annual report

‘On today’s immigration depends the survival of Jewish communal life in this country. We can replenish and revitalise our stock today. Tomorrow it may be too late.’ – Leo Fink, 1947

‘I was born in the Shtetl and regard myself as a Shtetl product: a Jew who brought with him qualifications bred in the life of the Shtetl, which is a combination of many factors; its stark realism and its sensitive romanticism; a rational appreciation of human values as well as an understanding of their failings in the struggle for survival against great odds; a love for humanity and for one’s fellow man.’ – Leo Fink speech written before his death and quoted at his shloshim, 23 October 1972

‘We had a philosophy of recreating a Jewish group life in a vibrant, cohesive Jewish community here in Australia.’ – Leo Fink shortly before his death in 1972

‘The Holocaust shattered me. I felt that we cannot accept the situation with resignation. Something had to be done.’ – Leo Fink reflecting on why he became active in welfare during the war, 1972

‘Men were inclined to think that women were there to “make the tea”, and really I don’t see why they shouldn’t make the tea for us, sometimes… We are almost there in this equality battle. What we need now, to bridge the gap, is the help of the men, and the women must seek this help.’ – Mina Fink, Courier Mail, 16 June 1970

‘When we worked for the Relief Fund, we worked for ourselves. There wasn’t one of us who hadn’t lost someone in the war… It was our object to help rebuild lives, and some felt that it was their only chance in a lifetime to give a blood transfusion to help achieve that.’ – Mina Fink, Australian Jewish News, 1 October 1976

‘We have a sacred obligation to maintain and if necessary extend the services for the aged, for the young, for the physically and mentally handicapped.’ – Mina Fink, Australian Jewish News, 4 September 1987

‘I have a deep feeling for underprivileged people. After the War, the shock of what had happened touched me greatly. I put all my personal efforts into relief fund work. Community service has become my life’s work.’ – Mina Fink, Australian Jewish News 11 September 1987

In the words of others:

‘He was unique in his generation – an industrialist and an intellectual who believed that the unfortunate of the world were entitled not to charity but to the means for their own rehabilitation.’ – Obituary for Leo Fink, Australian Jewish News, 29 September 1972 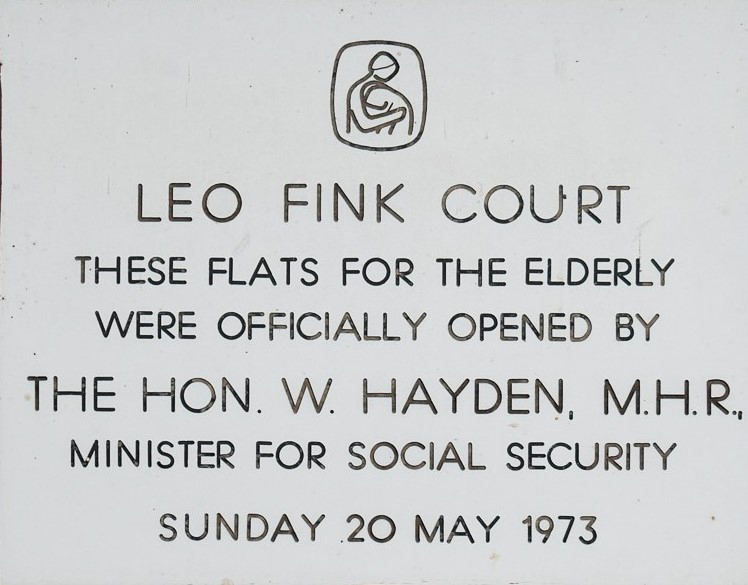 ‘He was, as are you [Mina], steeped in the Bialystoker tradition of service to our less fortunate brothers and sisters and our community is greatly indebted to him for his long-standing leadership in good causes.’ – Alec Masel letter of condolence, undated, late September 1972

‘It was his historic privilege to become and to remain a Jewish pioneer who used the best of yesterday for the upbuilding of the Jewish tomorrow.’ – Rabbi J Schreiber of Kew Hebrew Congregation, 21 September, 1972

‘He [Leo] saw the true purpose of his welfare work to be the uplifting of the migrant and the underprivileged so that they, in turn, could not only receive but in future would be the best people to help others.’ – Nathan Fink (son), speech given at his son’s bar mitzvah, 1975 ‘Brought up in the kehillah of Bialystok, Mina had an abiding commitment to the Jewish people and her concern for the welfare of our people led her to a lifetime involvement with communal organisations.’ – Walter Lippmann, Eulogy for Mina Fink, 4 May 1990

‘Mina was indefatigable, involved in setting up the Holocaust Centre’s administrative structure and serving on the Board. Her particular interest was the educational program and the training of Holocaust survivors as guides.’ – Jewish Holocaust Centre, 1990

‘Mina Fink was a feminist in the best sense of the word. It is a reflection of her concern for women to assume active and leadership roles in the life of the community that I and many others were inspired by her to become involved and assume positions in NCJW and other organisations.’ – Sylvia Gelman, Mina Fink Commemorative Evening, 17 June 1990

‘It is impossible to speak of Mina without uniting her with her late husband Leo Fink. Although he passed away many years before her she spoke of him to the last, always as a constant companion and a source of guidance. They worked together as a team and they complimented one another in their varied activities.’ – Johnny Baker, Mina Fink Memorial Service, 1990

‘We feel it is our duty to carry on our grandparents’ project…they taught us the value of volunteering and philanthropy…giving time and money to organisations that are doing important work has provided us with a sense of purpose and community involvement. Hopefully, these things are making the world a better place.’ – Deborah Golvan (granddaughter), 1 June 2018

‘Volunteering time and funds is a way to balance the moral compass.’ – Alex Freiberg (grandson), 1 June 2018