'A matter of life and death' – the war years

As early as October and November of 1939, the Australian Jewish News employed terms such as ‘annihilation’ and ‘extermination’ to describe the Nazis’ murderous campaign in Poland. While the fate of family, friends and other individuals trapped in Eastern Europe was often impossible to ascertain, it was understood that this was a deadly war waged against all Jews. For Jews in Australia, this was deeply personal. Right from the start, they joined the war effort on all fronts.

In 1940, Mina Fink undertook three First Aid training courses with St John Ambulance. She learned to provide first aid to the injured, air raid precautions and home nursing. On 9 December 1940, she received the St John Ambulance medallion in recognition of having passed all the requisite examinations. Mina proudly kept these certificates for the rest of her life. It was important to her not only to offer assistance, but to be recognised as qualified to do so. 1942 was the deadliest year of the war with Hitler’s Final Solution sweeping across Europe, destroying every last vestige of Jewish life. Here in Australia, national days of mourning were organised by rabbis, letters of protest against the carnage were sent to world leaders, and public rallies were held in solidarity with their persecuted European brethren. Rather than feeling helpless, Jews such as Leo and Mina Fink were galvanised to do more, to make a tangible difference. Relief and aid became their focus.

By October 1942, Leo began to flex his communal muscle. As Treasurer of the Kadimah, he proved himself to be a highly successful fundraiser and organiser – the annual bazaar netted 50 per cent more than the previous year, all of which was distributed to the war effort. In November of that year, Leo joined the Community Reorganisation Movement forcing the autocratic Victorian Jewish Advisory Board to democratise: ‘We want a thoroughly democratic organisation responsible to the community and sensitive to its wishes. That is our right. We shall accept nothing else.’ For Leo, leadership was governed by democratic principles and shared responsibilities.

When the Victorian United Emergency Committee (UEC) was formed on 21 January 1943 to raise funds for relief, Leo was not on the executive. Leo was planning a bolder initiative. A meeting to launch the Jewish People’s Relief Fund (JPRF) was held on 13 June 1943. An undated handbill, printed by York Press for the JPRF, stated its aim to be united with the struggles of the Jewish world:

‘To the Jewish People of Victoria’…

‘We address this appeal to you in the most tragic time of our two-thousand-year-old martyrdom…Europe has become one huge slaughterhouse full of the innocent blood of our brothers and sisters…our brethren in the Ghetto of Warsaw…saw no other way out of their plight than armed resistance…although they knew well that they will pay for it with their lives…we Jews in Australia must do something too…should we remain inactive we shall never be forgiven by them…we must create a big JEWISH PEOPLE’S RELIEF FUND TO WHICH EVERY JEW SHOULD MAKE REGULAR CONTRIBUTIONS…we dare not think in terms of charity…but of the fulfilment of a great duty towards the whole of the Jewish people…stretch out a helping hand to your tortured kith and kin.’

On 20 June 1943, Leo was elected President of the JPRF, unopposed. A delegation of three were elected to meet with the United Emergency Committee. A takeover was in the offing. Leo positioned himself to be the head of a strategic relief organisation with networks across the Jewish world. At the same time, the women formed their own group with Mina and Mrs Hiller charged with its organisation. The Fund became the United Jewish Relief Fund in anticipation of a ‘merger’ with the UEC. The Australian Jewish News on 23 July 1943 announced that ‘full agreement has now been reached on a number of differences…there will henceforth be one fund only to be known as the United Jewish Relief Fund (UJRF).’ 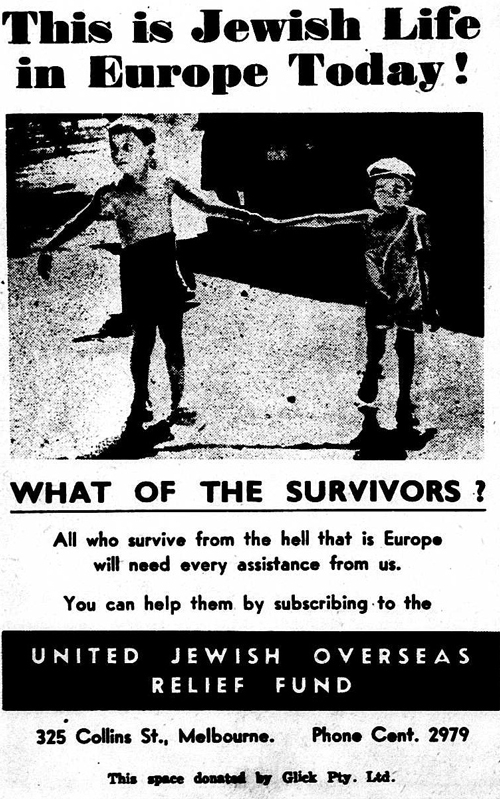 Membership subscriptions formed the basis of fundraising, but the UJRF still needed to negotiate the means by which funds could be distributed overseas. By late July 1943, agreement was reached to contact overseas relief organisations for assistance. This included the American Jewish Joint Distribution Committee (the Joint), the Rescue Department of the Jewish Agency, the Jewish Labor Committee in America, and the World Jewish Congress. It was also agreed to ask the Joint for advice on the best way forward. A global Jewish network was needed.

At a meeting on the 18 August 1943, Leo steered the UJRF towards a number of crucial business and management issues: tax deductibility to encourage donations and the swift establishment of the Ladies’ Group (which occurred soon after on 26 September 1943). Contact was also made with Jews in Shepparton, Victoria and Adelaide. Within three months of its inception, the UJRF membership stood at 454 pledges totalling £6650, with £2100 paid. Donations totalled £937. The UJRF minutes reported: ‘We advise the Jewish Agency that we await their detailed reports and that we emphasise that our aims are to help in rescuing European Jewry... While money cannot yet be sent, goods can…setting up a committee for collecting clothing, food etc.’

In October 1943, Leo was elected President of the Kadimah, a position he held for five months. His message clearly mirrored the UJORF’s in advocating the unity of all Jews: ‘While we mourn the loss of millions of Jews, we hold unshakeably that Jewry will continue to live…will be reborn anew… We will do all in our power to enable those Jews who are left in Europe to take up their normal, healthy way of life again, and in so doing we will be doing all we can for the perpetuation of our own modern culture.’

After an extraordinary general meeting of the UJORF, with 400 in attendance, Leo was again elected president on 9 December 1943. By the year’s end, £5500 in funds were available. £3000 were sent to the Joint for distribution at their discretion for relief of Jews in Spain, Portugal, Switzerland and Sweden. A further £1500 were set aside for Russian Jews, with £1000 reserved for fares for those wishing to travel to Palestine. As more funds were raised and dispersed, Leo ensured that the UJORF reserved the right to indicate the purposes for which funds were given, exercising control over the organisation and its overseas recipients.

At the beginning of 1944, the UJORF announced ambitious plans to launch an appeal in June targeting £50,000. Dr Weyman moved that a Jewish medical mission to Europe be formed. The Ladies’ Group operated workrooms for clothing and blanket collection from 22 Patrick Street in Melbourne.

The UJORF’s first annual general meeting report, issued on 30 June 1944, noted considerable achievements. Membership of the UJORF stood at 1794 and that of the Ladies’ Group at 771. £18,000 had been collected, with £7000 remitted to the Joint in Jerusalem and £750 to the Jewish Labour Committee in America. Since its inception, the Fund had allocated £40,100 to Jewish relief organisations overseas. In addition, two tons of honey and 20 tons of soap had been purchased and shipped overseas. Wartime exigencies had prevented the purchase of other supplies, such as condensed milk and dried egg powder. Leo noted the community’s commitment to rehabilitation of survivors: ‘When Europe is finally freed, the remnants of European Jewry will present a ghastly picture of havoc and utter misery. They can be helped only by a concerted and sustained effort of their fellow Jews in the free countries. In this global effort of world Jewry, we Jews of Australia will have to play a part that far outweighs our numerical strength.’

From June 1944, pockets of Europe were being liberated. In response, the UJORF began a service for tracing relatives, indicating a shift in direction towards rescue and resettlement.

On 3 October 1944, Mina was elected President of the Ladies’ Group. She outlined a comprehensive list of functions already in hand and plans for future growth, including a Youth Group.

In a perceived power struggle between Zionist and Bundists within the UJORF, Leo addressed a letter to the Australian Jewish News on 8 December 1944. He asserted in it that the UJORF was non-political and only acted in the interests of alleviating the suffering of Jews in Europe: ‘Our aim is the relief and rescue of the Jewish individual unconditionally irrespective of his world outlook or future plans.’ He also highlighted the work of the Ladies’ Group ‘They are responsible for every article from an overcoat to a vest, from the time it leaves a Jewish home in Australia until the time it reaches a Jewish home in some far corner of the world.’

On 22 December 1944, Leo affirmed control over Jewish agencies’ distribution of funds, insisting they be used for ‘relief and rescue work’ and not administrative costs. Mina suggested that funds be sent directly to Jews in liberated countries. A decision was made to support specific projects rather than give funds to large organisations to use at their own discretion.

In early 1945, the UJORF executive recommended that £10,000 be spent on food and clothing for liberated Polish Jewry. It set a target of £50,000 for its next appeal.

In a demonstration of his businesslike approach to funding, Leo requested more details from the Jewish Agency on expenditure. The UJORF received a cable on 12 February 1945 stating that, to send survivors to Palestine, £100 per person was required for transportation and maintenance.

In March 1945, the UJORF appealed to Jewish youth to join the struggle: ‘Help our starving and destitute brethren in Europe… Our work is not only rescue and relief but REHABILITATION.’

On 13 April 1945, Mina’s Ladies’ Group announced its first big clothing shipment overseas: ‘The Relief Fund shipped 93 cases (20,000 pounds) of clothing to liberated Jews in Poland.’ One month later, Mina demonstrated her fundraising prowess, presenting a cheque for £5000 to the Relief Fund. The Ladies’ Group reported, ‘She hopes to present a similar cheque again before end of year.’

In another sign that its actions were moving from victims to survivors, the UJORF received on 27 April 1945 a list of survivors from Theresienstadt. By the end of June 1945, David Abzac, a stalwart of the UJORF, undertook to publish survivor lists and distribute forty copies to different organisations for inspection.

On 21 June 1945, Leo and Mina returned from a successful trip to Perth where they formed a UJORF branch, expanding further the organisation’s fundraising capacity and outreach.

The UJORF initially decided to leave immigration matters to the Welfare Society and Polish Immigration Society. By September 1945, the UJORF had changed its policy on immigration, prompted by the plight of Jews stranded in Shanghai during the war, and now wanting to come to Australia. From then on, it became a prime mover in immigration and resettlement.

The UJORF President’s ‘Victory Year 1945’ report highlighted this new direction: ‘Continuous relief only cannot solve the problem of becoming independent and self-supporting. We must endeavour to rehabilitate [survivors] and do everything in our power to take them out from camp collectivism and regimentation to individual initiative and independence.’

By the war’s end, and within two short years, the UJORF was the largest and strongest Jewish organisation in Australia, with 2310 active members, a powerful leadership and proactive committee members. As Rabbi Wyshkowsky observed, ‘It is the only institution in the history of Australian Jewry that has brought together every strata of the Jewish community, all with the one unified purpose – that is, the saving of their fellow Jews.’ At the helm sat Leo and Mina Fink.