Back to the Holocaust

Throughout the 1980s, Mina Fink’s interests steered her back to the Holocaust, without diminishing her commitment to Jewish Welfare and the State of Israel.

On 27 February 1983, the English edition of Children of the Ghetto by Sheva Glas-Wiener, first written in Yiddish in 1974, was launched at the Beth Weizmann Jewish Community Centre. This book was given financial assistance and publicity through the National Council of Jewish Women (NCJW) at Mina’s instigation, with proceeds of its sale benefitting NCJW projects in Israel. Mina took a personal interest in the book’s release, overseeing its publicity and marketing. The subject of orphaned children in the Holocaust resonated deeply with Mina. She left no stone unturned in having the English translation reach a wide audience. The book was officially launched by Dennis Pryor, Reader of Classical Studies at the University of Melbourne. Both Isi Leibler, President of the Executive Council of Australian Jewry, and Diane Alley, National President of NCJW, spoke at the launch. 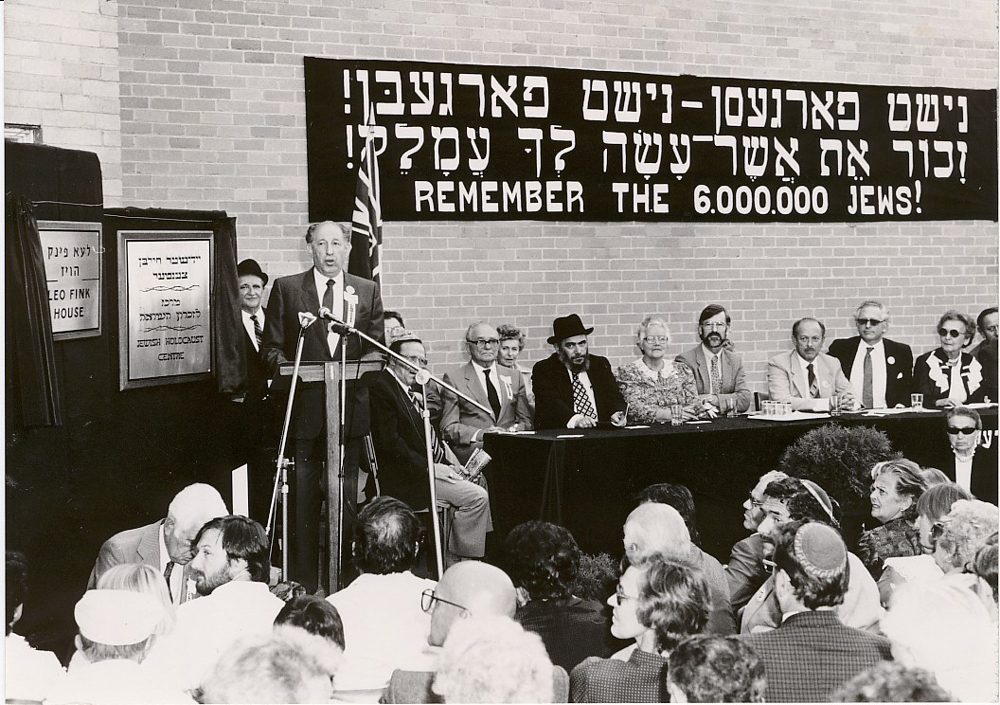 Opening of the Holocaust Museum and Research Centre 1984. Mina Fink on extreme right.

On 9 November 1983, Mina was elected President of the Appeal Committee for the Jewish Holocaust Centre (JHC), donating $50,000 towards the purchase of the two-storey building next to the Kadimah hall. This would become a museum named ‘Leo Fink House’.

The official opening of the JHC on 4 March 1984 attracted a huge crowd, estimated at 1500. Mina unveiled a plaque naming the museum building in honour of her late husband.

The JHC minutes of 6 March 1984 recorded that Mina and four others had been asked to form a finance committee.

Mina was confirmed as an advisor to the JHC on 3 May 1984. She took her role seriously, offering advice and instruction on organisational matters, and guiding education and community fundraising.

Mina retained a keen interest in Israeli institutions. On 13 July 1984, she became a ‘Guardian’ of the Western Pacific Friends of Beth Hatefusoth at the Museum of the Diaspora in Tel Aviv.

As patron of Adela Shaw’s stained glass memorial windows on the first floor of the JHC’s Leo Fink House, Mina gave the opening address in English at their unveiling on 16 December 1984.

On 11 February 1985, Mina accepted an invitation to be a sponsor of the ‘Free Wallenberg’ committee, spearheaded by Wallenberg survivor Dr Frank Vajda.

In line with her interest in tertiary education and Israel, Mina made a generous contribution of $10,000 to the Golda Meir Fellowship at the Hebrew University of Jerusalem. This was acknowledged on 14 June 1985.

On 1 August 1985, Rodney Benjamin, President of the Australian Jewish Welfare and Relief Society, expressed his appreciation of Mina becoming a Patron of the Jewish Welfare Relief Appeal: ‘Your association with the 1985 Appeal will assist us in realising our much increased, but very necessary target for 1985/6.’ At a board meeting of the JHC on 26 November 1985, Mina raised the question of employing a professional Guide Education Officer, highlighting that a subsidy of $3000 was received for this purpose. She also encouraged the Board to extend an invitation to Professor Martin Gilbert. He was prepared to come in 1986. Mina pushed for professional education programs and public lectures.

The JHC Board minutes of 6 January 1986 recorded Mina’s support for plans to expand the Centre. She also presented a brochure she had secured from Yad Vashem in Jerusalem, urging the JHC to establish membership with the International Society of Yad Vashem.

In a letter to the President of the Melbourne Jewish Philanthropic Society on 3 March 1986, Mina asked for special consideration and immediate admission to the Montefiore Homes of [Yiddish actress and welfare worker] Rachel Holzer, who was living in extreme hardship in a non-Jewish institution: ‘She devoted her whole life to the strengthening of Jewish culture in all its facets, and her contribution to the enrichment of our community is indeed difficult to measure…we believe that the community for whom she worked and to whom she gave so much is entitled to ensure that Rachel Holzer is able to enter the Montefiore Homes immediately.’

The JHC Board minutes of 23 October 1986 noted the shloshim for Sheva Glas Weiner on 27 October, with an opening address by Mina.

In 1987, Mina was elected Vice President of the International Council of Jewish Women (ICJW). She was also made an Honorary Life Governor and Honorary Life Member of the ICJW’s Executive.

Mina was invited to be President of the Jewish Welfare and Relief Fund Appeal in September 1987, pledging to ‘do all in my power to make the Appeal the success it deserves’.

In October 1987, Mina was invited to submit a biographical entry of herself to the Biographical Encyclopedia of Jewish Personalities in Israel and Abroad.

On 10 November 1987, Mina was invited to join the Bialystoker Center in New York as a benefactor. Mina Fink and her volunteer guides at the Holocaust Centre

The JHC Board minutes of 13 November 1987 noted that Mina had recommended that the museum curator have a reserved room, and that an expert be called in to advise on the best way forward. She also proposed that the JHC subscribe to a journal published by Professor Yehuda Bauer, an Israeli expert in Holocaust history, that discussed Holocaust issues. This was approved by the Board.

Mina pushed for JHC survivor guides to undergo formal training, both to support these volunteers and to ensure that each visit was an effective educational experience. Naomi Rosh White, Bernard Rechter and Mina formed the ‘guides group’ and undertook the first training. Mina arranged for National Gallery of Victoria guides to come to the JHC to talk to the survivor guides. Jenny Wajsenberg also set up projects, ran seminars for teachers and established links with Yad Vashem’s teacher training program.

In June 1988, Mina resigned from the Executive of the JHC, allegedly in protest of the organisation and its running of meetings. Mina was a stickler for accurate recordkeeping and orderly procedures at meetings. She nevertheless remained a supporter of the Centre.

In private correspondence dated 5 May 1988, Mina was thanked for supporting the establishment of the Arnold Bloch lectureship within the Department of History at the University of Melbourne.

The sudden and tragic death of Mina’s youngest grandchild, Naomi Segev (Fink), on 21 December 1988 devastated Mina. It was a tragedy from which she never fully recovered.

On 2 May 1990, following a heart attack from which she appeared to be recovering, Mina died suddenly of a cardiac arrest in the Melbourne suburb of Prahran.