1960 saw Mina Fink in her last year as President of the National Council of Jewish Women (NCJW) Victorian Section. Leo Fink relinquished his presidency of the Australian Jewish Welfare and Relief Society (AJWRS).

In February 1960, Leo and Nathan Jacobson commenced formal requirements to bring together a group of investors: a ‘Board of Directors of a Syndicate’ to support an Australian wool tops enterprise in Israel. In discussions with the Israeli Ministry of Commerce and Industry, they concluded that they needed to meet a number of requirements. Also, the Israeli Department of Commerce insisted on face-to-face meetings.

In June 1960, Leo was given a formal farewell by the Executive Council of Australian Jewry (ECAJ), Zionist Federation of Australia, Victorian Jewish Board of Deputies, State Zionist Council of Victoria and Welfare Society. He travelled to Israel with Nathan Jacobson to lay the groundwork for the wool tops enterprise. This had substantial community support. 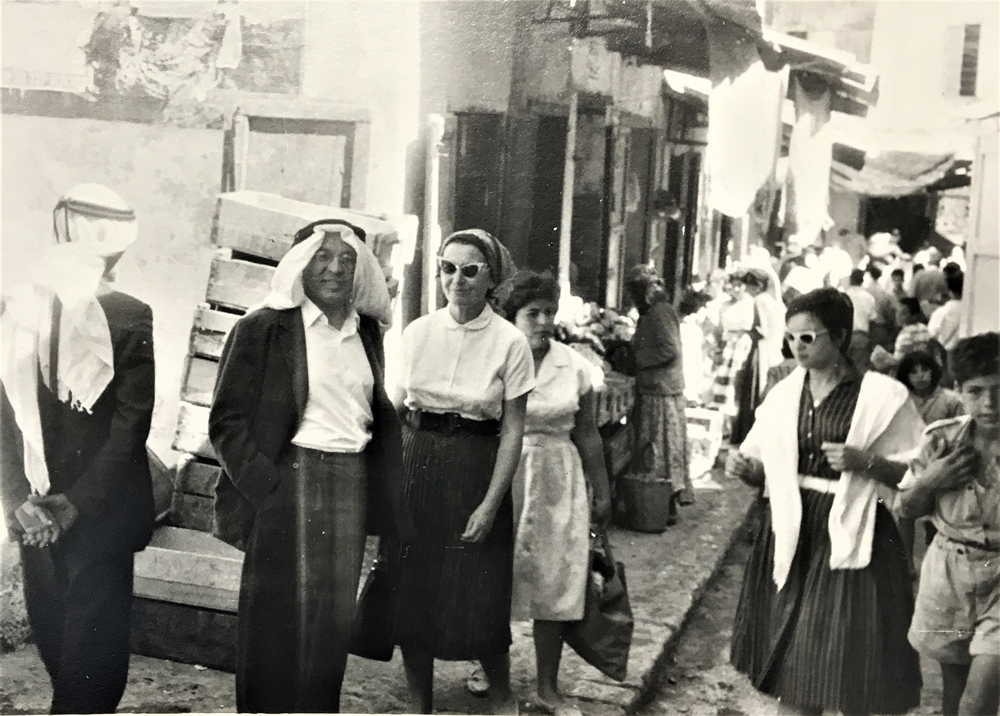 On the 16 May 1963, the official opening of Australian Wool Industries Pty Ltd (AWI) took place. A wool tops plant in Ashdod would import raw wool from Australia. This would be developed into an entirely new industry, giving employment to new settlers in a newly developing city. It was the first all-Australian investment enterprise in Israel – established under the patronage of Pinchas Sapir, Minister of Commerce and Industry, and in the presence of John Hood CBE, Australian Ambassador to Israel. Mina recalled that ‘this was one of the highlights in our lives’.

In a letter to Nathan Jacobson on 28 October 1963 from the Israel Embassy in Canberra, Leo was asked to attend a meeting between the Israel Trade Mission and Canberra. The purpose was to get approval for export from Israel to Australia of AWI’s carpet wools and goat’s hair.

On 7 February 1964, Maurice Ashkanasy, President of ECAJ, wrote Leo a testimonial for his trip overseas, giving him authority to represent Australian Jewry: ‘He is authorised to speak and act on our behalf in matters relating to the affairs of Australian Jewry in relation to overseas Jewry…have regard to his official status and long and distinguished record in the Australian Jewish community.’

On 16 June 1964, a letter from Yaacov Feiglin, General Manager of AWI, informed Leo of a ‘decision of the Executive that Mr Henry Krongold will be devoting time to the affairs of the Company.’ By July 1964, Krongold had obtained Israeli government assurances that would protect the business interests of AWI, but further letters to Leo from Feiglin revealed ‘procrastination’ on Israel’s part.

On 4 December 1964, an article in the Jerusalem Post lauded the new enterprise: ‘Ashdod’s Wool Centre is model industrial plant’. It highlighted three advantages of the enterprise:
1. a model up-to-date industrial plant
2. a basic industry using a natural product and putting out a staple commodity good for export and import opportunities
3. acts as a bridgehead for fostering economic ties between Israel and Australia.

Back in Melbourne, Leo was asked by Walter Lippmann to be Chairman of the Immigration Section of the program at the AJWRS conference on 28–31 January 1965.

Dated 13 March and 8 August 1965, United Carpet Mills received two letters from the League of Arab States, the central office for the boycott of Israel – they threatened to boycott Fink products due to their dealings with Israel. No response or acknowledgement from Leo was recorded.

On 13 August 1965, the Australian Jewish News announced Leo as Chairman of the Special Gifts Division of the AJWRS Annual Appeal. His role involved managing major donors.

On 25 August 1966, Leo wrote to David Govrin at AWI Ashdod, voicing his frustration that ‘industry in Israel is more political than economic’. 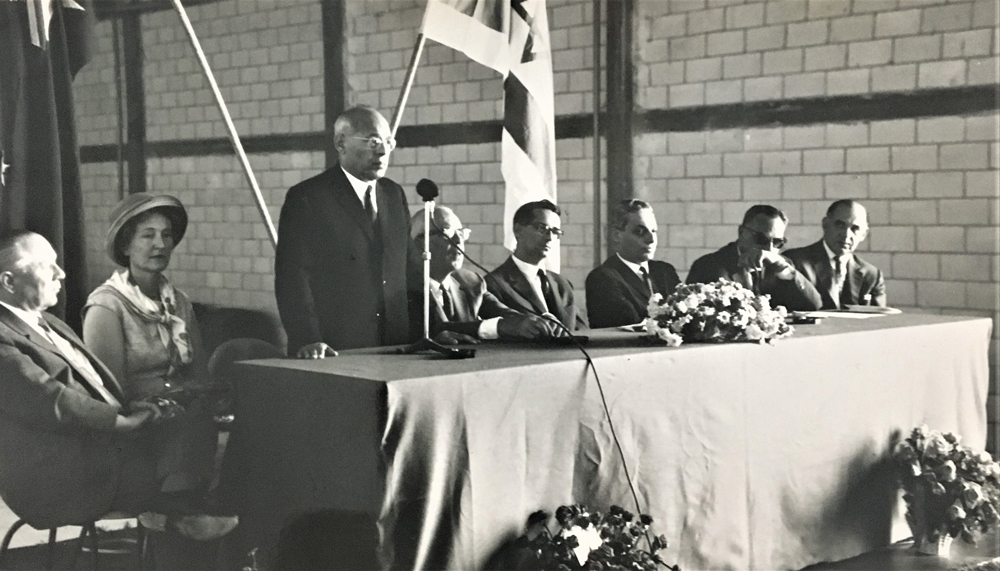 On 19 June 1967, Mina was elected National President of NCJW, a role she held for six years. She quickly grasped the enormous changes that were taking place for women, and the flow-on effects for the women’s movement and non-profit organisations. She showed considerable ability to engage an educated younger generation of women in taking on leadership roles. She also imparted a new professionalism in the running of meetings and fundraising. Together with her protégé Malvina Malinek, Mina organised the Trust Foundation, which generated funds for the Victorian Section’s philanthropic endeavours. Working with Leo’s sister-in-law, Sadie Fink, the Foundation rolled over the profits from the International Council of Jewish Women (ICJW) Convention into a fund for the establishment of the Victorian Section’s Council House. Mina advanced the organisation into a humanitarian, global role with large-scale projects. Her presidency moved its headquarters to Melbourne, for the first time in 44 years. Mina was the first president born in Poland, but identified as a feminist who nevertheless did not see the role of women supplanting men. Mina believed that women had a place in the wider world, but would remain the arbiters of family life. The 1970s brought the feminist agenda into the mainstream.

In 1967, the Fink brothers purchased Castlemaine Woollen Mills while the business was in receivership.

From 31 March until 4 April 1968, on the personal invitation of Israel’s Prime Minister Levi Eshkol, Leo and Mina attended the first Israel Economic Conference in Jerusalem, convened by Eshkol. Leo was a leader of the Australian delegation.

Throughout 1968 and 1969, following a resolution taken at the Israel Economic Conference, Leo attempted to establish an Australian-Israeli Chamber of Commerce. He’d hoped to promote and market Israeli products in Australia, but was thwarted by what he called the ‘Zionist establishment’ whom he believed controlled the agenda.

From 31 May to 4 June 1968, Mina was Chairman of Resolutions at the ICJW’s Triennial Conference in Jerusalem.

In a letter to Pinchas Sapir, Israeli Minister of Finance, on 17 July 1968, Leo highlighted personal problems and how his views differed from those of other AWI Directors. This remained unresolved and resulted in Leo relinquishing his role in the company shortly after.

On the 9 April 1970, The Age publicised that ‘Fink Carpets group to go public’ and to float the company. Also announced was a $4 million nylon plant to open by the end of the year in Thomastown, Victoria.

In June 1970, Mina as NCJW National President, announced that the Council would join with all major Australian women’s organisations to build a $200,000 women students’ hall of residence at the University of Papua New Guinea. (Courier Mail, 17 June 1970)

In mid-1970, Leo was on the ‘Initiative Group for the Herz Bergner Memorial Fund’ to perpetuate the memory of Yiddish writer Herz Bergner. The group aimed to foster Jewish literature through the publication of books by other Jewish writers. Leo’s connection with Jewish culture remained strong.

Kalman Rogers, President of the Welfare Appeal of 1970, wrote to Leo on 7 May 1971, thanking him for his assistance in canvassing and collecting considerable funds.

Ron Taft thanked Leo and Mina on 14 March 1972 for their financial assistance in the publication of his chapter on Jewish youth in Jews in Australian Society, edited by Peter Medding. 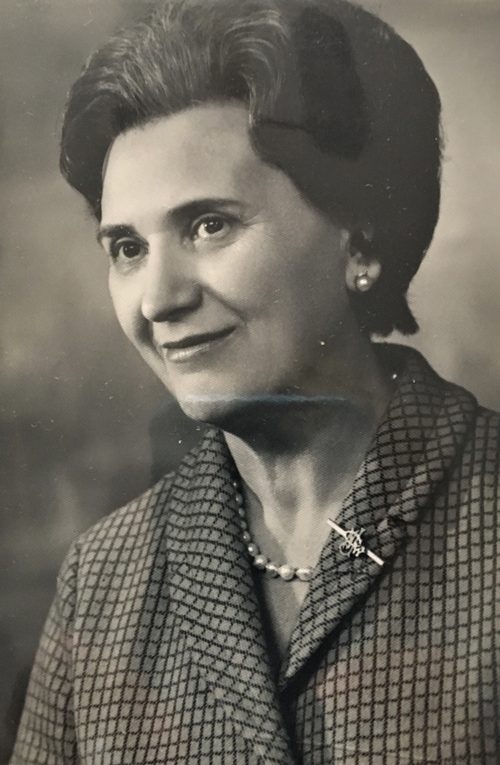 On 1 May 1972, Leo wrote a personal letter to Sir Henry Bolte, Premier of Victoria, congratulating him on his handling of the TNT dispute and The Holding Student demonstration. ‘Tackle your opposition with mercy but remain on the winning side,’ he advised.

Leo and Mina were thanked by Sender Burstin on 25 May 1972 for their donation of $10,000 towards the Kadimah’s building costs.

On 3 August 1972, Leo instructed the Australian Jewish News to utilise his donation of $1000 towards the publication of Moshe Ajzenbud’s next Yiddish book.

Leo instructed Nathan Jacobson on 14 September 1972 to transfer his shares in AWI to the Leo and Mina Fink Fund: ‘I carried on a lone fight with Israel’s bureaucracy trying to achieve things in my own way, demanding my legitimate rights without bribery and ‘protectia’. The principle was more important than dividends. I now admit my folly. You see I still belong to the old school of Bialik and Ahad-Haam [pen name of Asher Zvi Hirsh Ginsberg, known as the founder of cultural Zionism].’ Leo was pleased to have ‘established an industry financed by Australian Jews and managed by them. It will provide a permanent link between the present and next generation.’

After a battle with brain cancer, Leo passed away on 20 September 1972, on his 40th wedding anniversary. Mina and the family received an overwhelming number of condolence letters. Obituaries appeared in the press. Commemorative evenings were held. Leo’s legacy in strengthening Melbourne Jewry was duly noted and recorded.

In November 1972, the Kadimah named the main hall of the new building ‘The Leo Fink Hall’.

The official opening of Melbourne’s Leo Fink Court, 26 flats for the aged at 27 Fulton Street in East St Kilda, took place on 20 May 1973. The Hon Bill Hayden, Minister for Social Security, presided and Sydney Einfeld, President of AJWRS, delivered the keynote address.

On 1 January 1974, Mina was awarded the MBE – Member of the British Empire ‘for Community Services, particularly Jewish Women’.

In 1975, Mina was Convention Chairman of ICJW’s 10th Triennial Convention in Australia. This was the first international Jewish meeting to be held in Australia by any Jewish organisation.

On 20 June 1976, Annia Castan wrote to Mina, thanking her for her advice and support: ‘You are the ideas woman who can see the potential in a person’. It was a sentiment shared by many of Mina’s loyal co-workers and friends.

In September 1976, Mina was nominated as Appeal Patron for AJWRS. On 24 September 1976, the Australian Jewish News quoted Mina: ‘Helping and welfare is not a new concept to the Jews; it is part and parcel of our tradition and religion. With almost every new settlement, a simultaneous growth with the synagogue was a welfare organisation.’

Between February and March of 1978, AWI sold their shares to Polgat Woollen Industries, Kiryat Gat Ltd, effectively ending AWI as an Australian entity.

The NCJW minutes of 27 May 1980 recorded that, as International Vice President, Mina was actively involved in the campaign to free Soviet refusenik Ida Nudel.