By 1931, business was good for the Fink brothers. They were manufacturing felt and knitted goods out of a rented factory on Queens Parade in Clifton Hill. To further expand their Melbourne enterprise, Fink Bros Pty Ltd authorised Leo Fink on 2 March 1931 with a credit note of £1500 to buy machinery in Europe. At a time when the Great Depression had driven unemployment in Australia to 32 per cent, business expansion of this magnitude was a considerable achievement. Leo planned his trip to include Bialystok, Poland where he would visit his parents and sister, who now resided at 25 Czestochowska Street. In Bialystok, on 3 June 1932, 19-year-old Miriam (Mina) Waks graduated from the extremely prestigious Druskin Gymnasium, having benefited from its expansive secular curriculum and co-educational environment. She had received there an outstanding progressive education, one in which she had parity with her male colleagues. Although she would later regret not receiving a university degree, her education in these formative years would remain an important factor in developing her self-esteem and shaping her worldview.

Shortly after graduating, Mina was introduced to Leo via his mother, who acted as matchmaker. Concerned that her 31-year-old eldest son was still a bachelor, Masza Fink set out to do something about it. On her grandmother Brajna Kaplan’s advice, Mina agreed to the match, in full knowledge that it would take her far from the home she knew and loved. Leo was a good man, educated, with excellent prospects, and a fellow Bialystoker. Mina trusted her intuition. On 20 September 1932, Leo and Mina were wed.

The newly married couple arrived in Melbourne on 29 November 1932 aboard the Orama, travelling third class. Their residence was listed as 33 Gipps Street in East Melbourne – what was then a small, single-storey workman’s cottage, but now part of prime inner city real estate.

The 1930s saw the consolidation and extension of family life for Leo and Mina. By the age of 22, Mina had experienced many dramatic changes to her life. She had been orphaned then become a wife, immigrant and mother of two. Mina gave birth to their daughter Freda on 18 September 1933 and their son Nathan on 21 January 1935. From 1933 to 1939, the Finks lived at 99 Walpole Street in the Melbourne suburb of Kew, in a house rented from the Lord Mayor of Kew. During their time there, the house was also home to Leo’s youngest brother Jack until he married, and Mina’s two brothers Jack and Leo when they arrived from Poland in 1937. 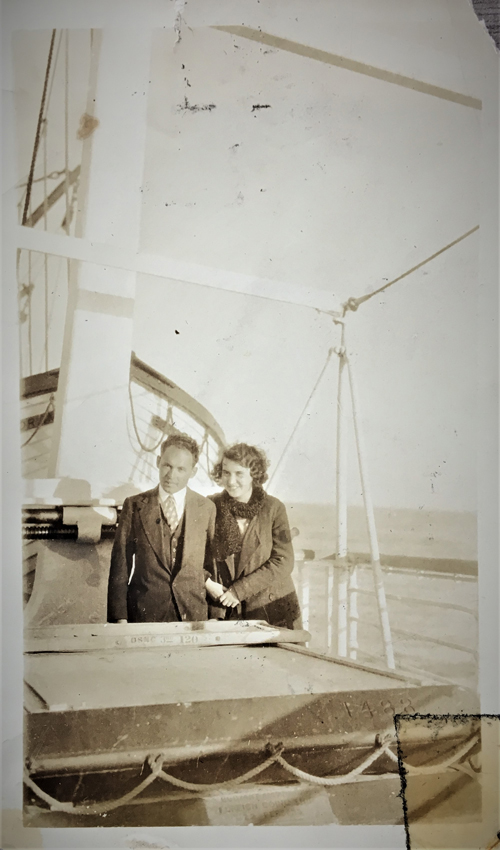 Throughout the 1930s, Leo had been busy building the family business with his brothers and arranging for the immigration of extended family members. He had also begun his foray into Jewish communal life, fittingly at the Kadimah, the Yiddish cultural centre in Carlton and Melbourne’s social hub for Eastern European Jewish immigrants. In 1936, Leo was co-opted as a Kadimah committee member and the next year elected as one. The year after, he became Treasurer, a position he served with distinction, making his mark as a very successful fundraiser and money manager.

On 4 February 1935, landing permits were issued to Leo’s elderly parents, Mordechai and Masza, and his disabled sister Zyna. This required considerable lobbying by Leo who travelled to Canberra to put the brothers’ case as their sponsors. He gave assurances to the authorities that their family members would not become a burden on the state. They arrived on the 10 December 1935, on board the Orama. They settled at 955 Rathdowne Street in Carlton, next door to the Talmud Torah, a fitting location for the religiously observant matriarch Masza Fink. By the outbreak of war, Leo had been responsible for sponsoring and bringing out nearly 30 members of the Fink and Waks families.

In 1938, Leo and Mina undertook a trip to Europe, putting Freda and Nathan in the care of Leo’s brother and his wife, Jack and Sadie Fink. Mina had been homesick, missing family and friends, in particular the grandparents and aunts who had raised her. In March 1938, Mina returned to Bialystok, travelling alone by train through Germany, while Leo remained in Western Europe. Her trip coincided with the Anschluss, when the Third Reich swallowed up Austria as part of its expansionist policy. Mina remembered hearing Hitler’s voice blaring out from the radio, ‘sending shivers down my spine’. Her short three-week stay in Bialystok was bittersweet. Family and friends begged Mina to arrange passage for their young children, to take them to safety in Australia. On her return to Melbourne, it was too late. The fact that she didn’t do more haunted Mina for the rest of her life – ‘I could have saved a few more lives.’ She never saw her grandparents, aunts or Bialystok again.

With the outbreak of war in September 1939 and mobilisation, Leo enlisted in the Army Reserve 24/39 Battalion on 18 December that year. He didn’t see active service, but dutifully signed the oath: ‘I will well and truly serve our sovereign lord the King in the Militia Forces of the Commonwealth of Australia for the term of three years or until sooner lawfully discharged or removed, and that I will resist His Majesty’s enemies and cause His Majesty’s peace to be kept and maintained and that I will in all matters appertaining to my service faithfully discharge my duty according to the law.’

Loyalty, duty and commitment – Leo and Mina would be defined by their actions both during the war and in its immediate aftermath. Their time had come.