Jack is one of our Arts Global Scholars, this is a scholarship program available for Bachelor of Global Studies students. Jack went on Exchange to Yogyakarta, Indonesia

My experience took place when I was doing my Flexible Language Immersion Program (FLIP) with ACICIS (Australian Consortium for ‘In Country’ Indonesian Studies) in the wonderful special region of Yogyakarta, Indonesia which is full of its Javanese wonder (persona), culture (budaya/kebudayaan), traditions (adat istiadat/tradisi) and fantastic places to visit, especially Candi Prambanan and Candi Borobudur, the famous tourist places of Indonesia in my books to go and visit due to their majestic beauty (keindahan) that they possess as well as they are the UNESCO world heritage sites or warisan dunia 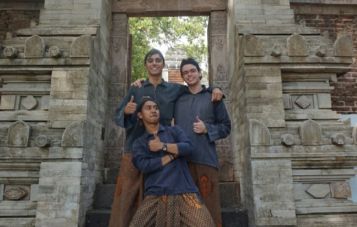 You have probably got an impression that I speak fluent Indonesian or Bahasa Indonesia, well, you are right, so when I stayed in Yogyakarta for 6 months from July 31st, 2017 until January 13th, 2018, it was not a problem for me to adjust to Indonesian from English, my native language and I felt proud as an Australian national (Warga Nasional Australia) that spoke fluent Bahasa Indonesia just about every day of week or for the whole 6 months living over there. Despite speaking fluent Indonesian during my stay in Yogyakarta, I also have been to Yogyakarta and stayed there for 4 days before during my study program I did with Monash University in the Australia and Asia Tour for 2 weeks, so I did not really have any problems whatsoever with adapting to the way of life (cara hidup) over there since I got a taste before coming to live over there for the 6 months, other than homesickness (kerinduan), missing family and Australia (kangen keluarga dan Australia). However, I had made plenty of friends (teman) which eradicated my homesickness (still doesn’t mean I still think about my family and my homeland) from other cities in Australia and ones from Melbourne as well as local friends from UGM (Universitas Gadjah Mada) and outside of it that I still keep in contact with until this vary day which I’m proud to call my family (keluarga). I was very grateful that I got this opportunity (kesempatan) to experience (pengalaman) living in Indonesia which I’ll tell you is different to having a holiday there such as Bali, we have all heard about it before, I experienced much more in 6 months compared to 4 days over there as well as appreciate and be lucky to take it all in to explore (jelajahi) the wonderful city of Yogyakarta.

I don’t have one favourite activity (aktivitas/kegiatan) due to so many wonderful adventures (perjalanan) and excursions (tamasya) I had with the wonderful people who I’ve known, so it will be a tough decision to choose one, this is the reason why I’m naming my favourite highlights of my stay in Yogyakarta as well as my travels in Indonesia. If I had to choose my favourite activities in Indonesia, they will be of the following:

I had a fantastic time studying in Yogyakarta in UGM with ACICIS and they have so many programs that are offered, not only the FLIP Program which I did and when I left Indonesia as well as a few days to my departure, I did not want to leave, I just wanted to stay there, it was the vibe I got from Yogyakarta with my warm, loving people I made friends with as well as the beautiful people such as my landlady or ‘ibu kos’ who did not speak English, but luckily I can converse with her in Indonesian about anything as well as the people near my kos, especially the couple near my kos who remember me and greeting me hello everytime they see me or back to buy something. As well as, paying only 2.2 million rupiah per month for my rent which is equivalent to approximately $220

I miss Indonesia and someday I want to go back and live and work there in the future as well as become a permanent resident after 5 years living there consecutively as a WNA (Warga Negara Asing) or Foreign Citizen.