Jaydn is one of our Arts Global Scholars, this a scholarship program available for Bachelor of Global Studies students. Jaydn went on Exchange to University of Tokyo in Japan. 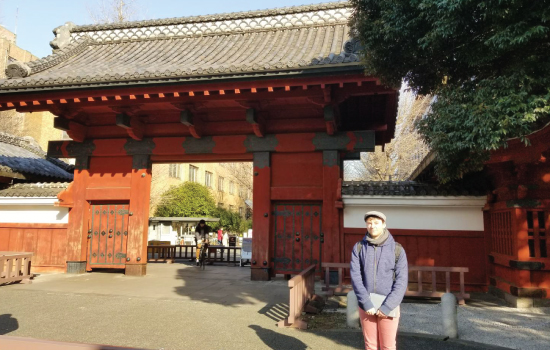 Hello, my name is Jaydn and I participated on a Monash University exchange program at the University of Tokyo, Japan for one semester.

On the one hand, doing an exchange program will be one of the most challenging things, those who have participated in one before will know. On the other hand, taking the plunge into an exchange program is also the most rewarding and enriching experience one will ever do in their life.

It is extremely daunting to leave one’s own country and leave it for 6 months or a year to another completely different country. No amount of previous language learning will prepare one for the difficulties of trying to use even basic phrases that you learn in a classroom in real life, such as ‘where is this?’ or ‘what is that?’ Learning a language can be frustrating and extremely embarrassing because you may not even know how to ask for directions, however, the only way to learn a language is to have the courage to make mistakes. In order to have a support group to learn Japanese and learn about Japan.

I joined a ‘circle’ or sākuru called ‘Yoppi’ aimed at exchange students to mingle with Japanese University of Tokyo students. We would do a range of activities from just meeting up at a coffee shop and conversing in idle chit chat to cultural activities such as Japanese traditional tea ceremony and ikebana (flower arranging). This helped immensely because I could ask all sorts of questions to the group members approximately the same age as me. So, I urge anyone going on exchange, especially to Japan, to join a circle and meet locals so you can experience that country from a deeper perspective. This is a great way to learn the language.

Socio-culturally, Japanese social structure revolves around status and a politeness hierarchy. This idea took some getting used to for me. In Japan, there are different levels of politeness ranging from humble to respectful language and even progresses into minute politeness categories, which is very difficult to decipher who to use it toward, when to use it and even what to say exactly in a situation. Whereas, in comparison to English, an equivalent set of honorifics is hard to describe to someone who has not studied Japanese. In my Japanese reading class, the teacher would expect us to say shitsureishimasu upon entering the classroom meaning ‘excuse me’ and shitsureishimashitaafter the class had finished as a sign of respect amongst many teacher student related phrases.

However, the usage of these phrases can be used in a multitude of other circumstances such as imposing on someone when asking a favour, saying goodbye and apologising. This confused me at first as to the level of politeness required even for a teacher that you become close to or when a certain situation does not actually warrant the utterance of such a polite phrase but social maxims render it necessary out of pure socio-cultural politeness. Growing accustomed to the variability of Japanese honorifics was an extreme challenge but it was extremely rewarding to successfully use them as I could integrate into Japan and use it in my everyday life there.

The upsides definitely outweigh the downsides that one will inevitably experience on exchange but I implore anyone considering exchange, even those who have not studied a second language before, to just take the leap to understand a different Weltanschauung to their own. You will not regret it in the slightest.