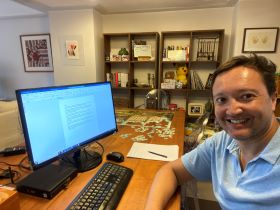 Hi there, my name is Chris Larkin – I completed an economic honours degree in 1998 and then in the mid 2000’s I undertook a Masters of Public Policy and Management which I completed in 2008.

I’ve been based on and off (but mainly on) in Bangkok since about 2001. I originally came over to work for the Thai government at the Ministry of Finance but moved to the private sector a few years after that. These days I run my own small firm, CLC Asia, which advises companies on investing in South East Asia.

Living in Thailand you take for granted that instability or disaster of some sort are part and parcel of living here – and without fail the country throws them at you, with Covid-19 being just the latest!

Thailand has been through a lot in recent memory, whether it be the Asian Financial Crisis in the late 90’s where the economy ground to a halt for a few years, SARS in 2002, the 2004 Boxing Day Tsunami, two military coups in 2006 and 2011 (and related protests, riots, city and airport shutdowns!), as well as the 2011 floods.

Through all these things though, Thailand has learnt to take setbacks in its stride, and as a result I’ve never felt unsafe or insecure and the country as a whole tends to bounce back quite quickly.

Though this is a medical emergency, the impact feels a lot more like the financial crisis in the late 1990’s. Bangkok (due to the enforced shutdown and nightly curfew) is today quiet as it was in the late 90s when the economy collapsed.

Thailand in 2019 saw 40 million tourists arrive. Today the borders are sealed shut with only a handful of flights coming in per day. Bangkok, one of busiest cities in the world is very, very quiet as a lot of these tourism related business have closed and workers have gone back ‘up country’ to wait out the shutdown.  Malls, restaurants and pubs are shut, with most office people are working from home.

Healthwise, Thailand seems to be dealing fairly-well with COVID-19. For a country of about 70 million, the authorities are holding the outbreak to about 15 – 25 new cases per day now. I think this owes a lot to Thailand having an excellent health infrastructure which has had to deal with large HIV outbreaks in the 80s and 90s and then SARS in the early 2000s, so was fairly well prepared in rolling out what it needed to.

As a family – we’ve been in isolation since late February more or less. While the official lockdown began in late March, a combination of self-isolation due to international travel, and then me being exposed to 5 people who were infected meant we have stayed fairly close to home for nearly 2 months now.

Overall, we are fortunate. My wife is a teacher at one of the international schools here – and the school was well ahead of the curve in setting everyone up for online learning given the experience similar schools were having in China. As such our daughters (14 and 6) are well looked after on the education front, and my wife teaches from home while I run my business from our dining room table. While business is slowing down, I still count myself lucky to have work to keep me occupied. Outside we have a tropical garden, birds chirping and (touch wood) our pool can still be used – and keeps us sane!

We are hopeful that restrictions will gradually be lifted in mid-May, but that is just a guess at the moment given this is unchartered waters for everyone.  Comment end