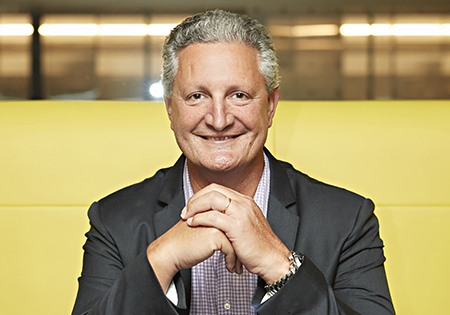 Al Ramadan takes a few big surfing trips a year, what the converted call the expeditions. "Life gets really simple," he says. "All you need is water, food, heat and shelter; it's really cool to be that connected  to nature."

Not really what you'd expect to hear from the Monash alum who graduated in 1982 with a Bachelor of Applied Mathematics and Computer Science, added an Executive Program for Growing Companies, Business Administration and Management degree from Stanford in 1995, rode the waves of the dot com boom and  bust, and helped to revolutionise Australia's entries in the America's Cup through the canny use of data analytics.

But the kid who started surfing at Point Leo on the Mornington Peninsula at age 14 now hopes that his new house in Santa Cruz will give him the opportunity to get in the water every day. It's how he unplugs from a career that has been at the forefront of technology for decades.

When Al started at Monash in the 1980s, the computing landscape was a different world made up of punch card programming and computers that covered entire floors. Although he was interested in numerical analysis, his future after graduation wasn't so clear.

Working at the John Lysaght site (which would eventually be bought out by mining giant, BHP) processing the steel mill's data, Al met his mentor, John Grey. It was here that Al formed his understanding of data and where John instilled its value. It was the skills Al learnt here that paved the way  for success with the America's Cup and future venture, Quokka Sports.

Having been in the workforce for 15 years but with no formal management training, Al's next step would prove to be the missing puzzle piece – Stanford University. Not only did he complete the Executive Program for Growing Companies there but the buzzing environment provided the catalyst for  a bold innovation as well as the venture capital contacts to make it happen.

Enter Quokka Sports, a digital sports company whose mission was to bring live sport to the internet. Given this was in 1995 and driven by modem connections, to say that technology was a challenge is perhaps an understatement. Quokka quickly reached the highest of highs, becoming one of the first Australian companies  to list on the US market going on to stream a live broadcast of the 2000 Sydney Olympics. However, like a lot of the high flying startups of the dot com era, it wasn't to last. Within its seven year life span, Quokka's value rose to $1b and then came crashing back down to nil when the  money that was so easily splashed around for advertising became a distant dream.

After a brief retirement at the age of 50, Al can now be found heading up Play Bigger, a business that brings together his vast experience in technology and his passion for data. They've even coined a phrase for the strategy they work with – category kings. A category king is a business that  dominates its particular category, think Facebook, Amazon, Netflix or Google. But it's about more than just staying at the top. Play Bigger teaches organisations how to define their own category: "The best solve a problem," says Al. "The process is define, develop and dominate."

Al recently spoke at a Monash Faculty of Information Technology panel while on a whirlwind visit to promote the book, Play Bigger: How Rebels and Innovators Create New Categories and Dominate Markets. Al says there's a renaissance going on in entrepreneurship and venture capital, but it's different now to when he was first starting out. "Companies are born global, they have a global mindset and  are trading straight away in the global market," he says. "I couldn't have had the career I have without the US. But now there's a chance for the next generation so they don't have to leave home to be successful."