How is menopause defined?

Menopause is defined as the time of the last menstrual period in a woman who has not had a hysterectomy. Thus it is usually diagnosed some time after it has actually occurred.

As periods can be irregular in women approaching the menopause, menopause can only be diagnosed with certainty 12 months after the last menstrual period.

The young ovary consists of incompletely developed eggs (germ cells) surrounded by specialised hormone producing cells which form a supportive structure. The cells which produce oestrogen encase the developing eggs in multiple little nests.  These cells are called follicular cells and the nests of the developing eggs are known as follicles.  Menopause occurs when there is extensive deterioration of these important follicular cells and the immature eggs (ova) within.  Thus the necessary sex hormones can no longer be produced and fertilisable eggs can no longer develop.  Blood levels of the hormones oestrogen and progesterone fall and women at this time may experience symptoms of oestrogen insufficiency.

Loss of ova (eggs) with age:

Before birth the ovaries of a healthy 20 week old fetus contains approximately 7.5 million immature eggs (ova). By birth this number has fallen to two million and by puberty only about 300 000 remain.  It is not understood why so many ova are necessary in the first place, or what determines their loss.  We know that when the number of healthy ova reaches 25 000, usually at about thirty–seven years of age, the rate of loss accelerates culminating in menopause at the average age of 51.5 years.  When the rate at which the ova disappear is accelerated earlier, menopause occurs earlier.

Communication between the brain and the ovaries

Normally, the function of the ovaries is directed by the pituitary gland, which is situated in the middle of the brain, which sends hormonal signals to the ovaries.  The pituitary gland in turn is controlled by the region of the brain called the hypothalamus. The hypothalamus acts as the master control box for reproductive function. The pituitary produces the hormones FSH (follicle stimulating hormone) and LH (luteinising hormone) which act on the ovaries to stimulate the development of a mature egg every 28 days.  The release of the mature egg from the ovary by this process is called ovulation.

When the health of the hormone producing cells of the ovaries (the follicular cells) deteriorates, oestrogen levels fall and this change is detected by both the hypothalamus and the pituitary gland.  The pituitary gland responds by producing greater amounts of both FSH and LH in an attempt to switch the ovaries back on.

The granulosa cells of the ovary also make proteins known as inhibins. Inhibin feeds back on to the pituitary and reduces FSH production. As menopause approaches, the ovaries produce less inhibin and this also contributes to the rise in FSH. 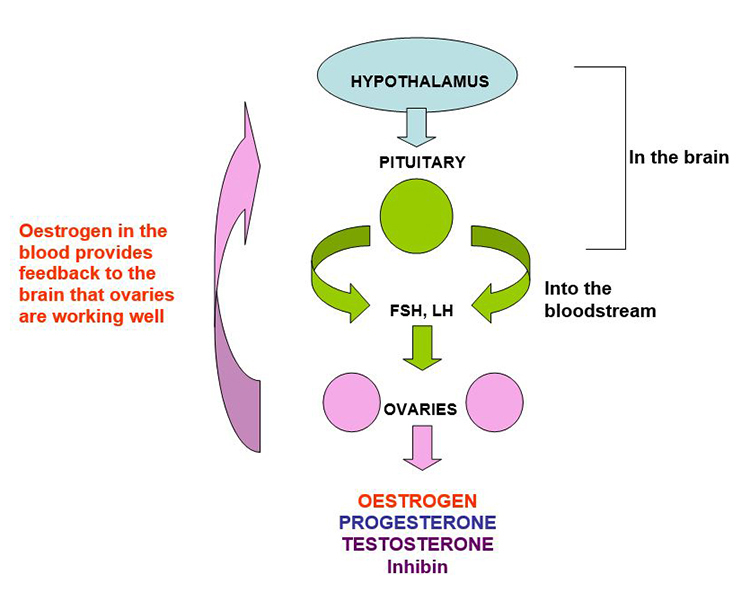 Stages of the menopause:

Menstrual irregularity is considered to be the earliest indication of the menopause transition (perimenopause). Because of the hormone fluctuations leading up to and around the time of menopause, women may experience intermittent symptoms ranging from hot flushes and night sweats when estradiol levels fall through to breast tenderness and swelling and heavy or irregular bleeding when estradiol levels rise in response to FHS drive. Commonly reported symptoms are listed below. Women may experience none of these symptoms, or several. Symptoms of menopausal hormonal changes may start several years before menopause, even whilst regular periods are occurring due to the changing hormone levels. Symptoms may last for few to many years in some women.

There is no cut-off age at which menopausal symptoms begin or end.

Hot flushes and night sweats occur in almost 80% of postmenopausal women and 28% of women report these symptoms as being severe. Deterioration in sleep quality is also a hallmark of menopause. Although more common amongst women with flushes and sweats, disturbed sleep architecture may occur independently.

Symptoms of menopausal hormonal changes may start several years before menopause, even whilst regular periods are occurring due to the changing hormone levels. Symptoms may last for MANY years in some women

How many women experience menopausal symptoms?

Why does menopause occur at all?

Evolutionary biologists believe menopause developed at a very early stage in human evolution, probably as long as 1.5 million years ago. This is most likely as a result of natural selection, such that women survived longer if they became infertile during mid adulthood.

Human infants are totally helpless for the first few months of life and then continue on to many years of childhood dependence.  Thus in early human evolution, females who lost their fertility at an earlier stage were not only protected from the increasing health risks of additional pregnancies, nutritional deficiencies, exhaustion and risk of maternal death, but were able to fully devote themselves to nurturing and protecting their highly dependent offspring.

In the past menopause is believed to have occurred much earlier than today, probably as early as thirty–five to forty years. Over thousands of years of evolution menopause has gradually occurred later in female adult life in the context of increasing human life expectancy.

Other effects of the menopause

Low oestrogen after menopause contributes to