Definition and Diagnosis of Osteoporosis

Normal bone is composed of a mixture of calcium and other minerals such as magnesium and phosphate. It is also made up of collagen (protein), which forms the structural framework of bone.

Osteoporosis occurs when there is a loss of mineral from bone mainly in the form of calcium as well as architectural loss of normal bone structure. The loss of mineral content of the bone is referred to as a loss of bone mineral density in the bone.

In itself, osteoporosis causes no symptoms. It is when fractures occur that the problems of osteoporosis arise. 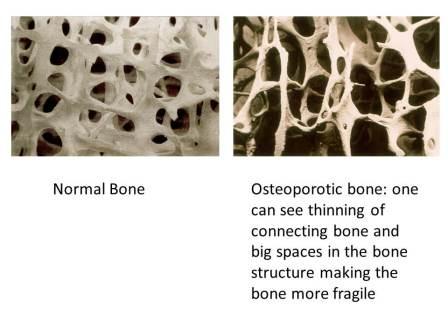 In past years osteoporosis was diagnosed by plain X ray which may have shown bone tissue to be less dense on X ray or the presence of crush fractures.

Today the diagnosis of osteoporosis is guided by measurement of the amount of mineral in bone (mainly calcium) by a special X ray technique called a Dual Energy X-ray Absorptiometry scan (DEXA scan)- see below. When osteoporosis is indicated by DEXA the diagnosis really relies on an increased risk of having a future fracture determined by a mathematical formula rather than a disease diagnosis.

This is important as over 50% of older women who in fact have an osteoporotic fracture seen on plain X ray in fact have normal bone density on DEXA Scan (Greenspan S et al, J Clin Densitom 2001; Davis SR et al Menopause 2010).

Therefore, screening older women (over 70 years of age) for osteoporosis requires a plain X-Ray of the spine to identify fractures, ideally combined with a DEXA scan.

Osteopenia is diagnosed when there is reduced mineral content in bone, but not as low as to be considered osteoporosis.

If you are over 40 years old, your DEXA result will be reported as a T score.

Your T score is the number of "standard deviations" by which your bone density differs from that of a young adult.

If your T Score is -1.0 to -2.5 you are said to have reduced bone density (osteopenia). Osteopaenia is not osteoporosis. It represents a stage when the bones have lost some bone mineral strength and are weaker, but not as weak as in osteoporosis.

If your T score is below- 2.5 this indicates the presence of osteoporosis.

Bone density of the hip measured by DEXA provides the most reliable risk prediction for future fracture.

How common is osteoporosis?

During childhood and adolescence, the bones within the skeleton are actively growing. By one's early 20's, growth and development of bone is complete. This phase of bone development represents the attainment of "peak bone mass". It essentially is a time when bones are ‘strongest'.

The peak bone mass that is achieved varies from one individual to the next and primarily reflects what has occurred during growth and development in childhood and adolescence. It is also influenced by genetic factors as well. Hence an individual who has had adequate intake of vitamin D, calcium, plenty of exercise and not been subjected to any sex hormone deficiencies (e.g. interruption to menstrual periods) during childhood and puberty will likely achieve a high peak bone mass as compared to the individual who has not had favourable circumstances for bone development during childhood and adolescence.

Certain medical illnesses also effect bone and can lead to the development of osteoporosis, often independent of peak bone mass. People who have any of the following are eligible for a Medicare supported bone density study in Australia and should have a bone density study performed.

Disclaimer
The above advice is a general guide to treatments currently available in Australia and was accurate at the time of production of this document. This information is provided to complement, not replace, the advice of your health professional.